An Old Pro at Sail Adjusting by Alicia Dean

She stood in the storm and when the wind did not blow her way, she adjusted her sails. ~ Elizabeth Edwards

I am not a sailor, nor am I a boatie. (I just coined a new phrase. You know, like trekkie? ;)) But, I know a little something about adjusting sails. When I was a child, our family moved a handful of times, and a few of them were devastating, frightening prospects, although they turned out fine in the end. All I had to do was adjust my sails. As an adult, I’ve moved quite a few times, changed jobs, made and lost friends, divorced, relocated, etc, etc. At nearly fifty, I began a whole new, never before attempted career as a legal assistant. As it turns out, I have a knack, and I love it. A lot. Of course, there’s also the writing thing. Rejections, publishers closing, attempting new genres, searching for new ways to market your book, and struggling with some of the stories that just don’t seem to want to be written. Talk about needing to adjust your sails!

All of that was easy, because I was the one affected, the one having to adjust my sails. But, recently, each of my three adult children has had experiences that have more or less rocked their world. I have found it’s not as easy to adjust sails for someone else.  I watch helplessly as they struggle and grieve, and all I can do is be there for them, encourage and listen to them, tell them that these experiences are, unfortunately, a part of life, and promise them that things will get better. And they will, it just takes time and a lot of pain. I believe each of our experiences, good and bad, mold us into the people we become. Maybe it’s a good thing I can’t take the hurt and struggles from my children. If I did, they wouldn’t become the people they are meant to be. They wouldn’t find their inner strength and fortitude. And, they would never learn to adjust their own sails.

Even though I don’t like for my children to suffer, I love for my characters to suffer (simmer down, I reward them in the end :)) I think that’s one reason I’m struggling with my latest WIP. My heroine isn’t suffering enough. I need to find some diabolical ways to wreak havoc in her world.

The heroine of my paranormal romance, Soul Seducer, dealt with a great deal of suffering. When you’re being threatened and tormented by one Grim Reaper, and falling in love with another, you have to do a lot of sail adjusting. Soul Seducer is an older release, but I got my rights back, and it’s been re-worked and re-released. I added back some scenes that my publisher made me take out, and it has a fabulous new cover.

***Temporarily on sale for 99 cents:  Amazon   Barnes and Noble 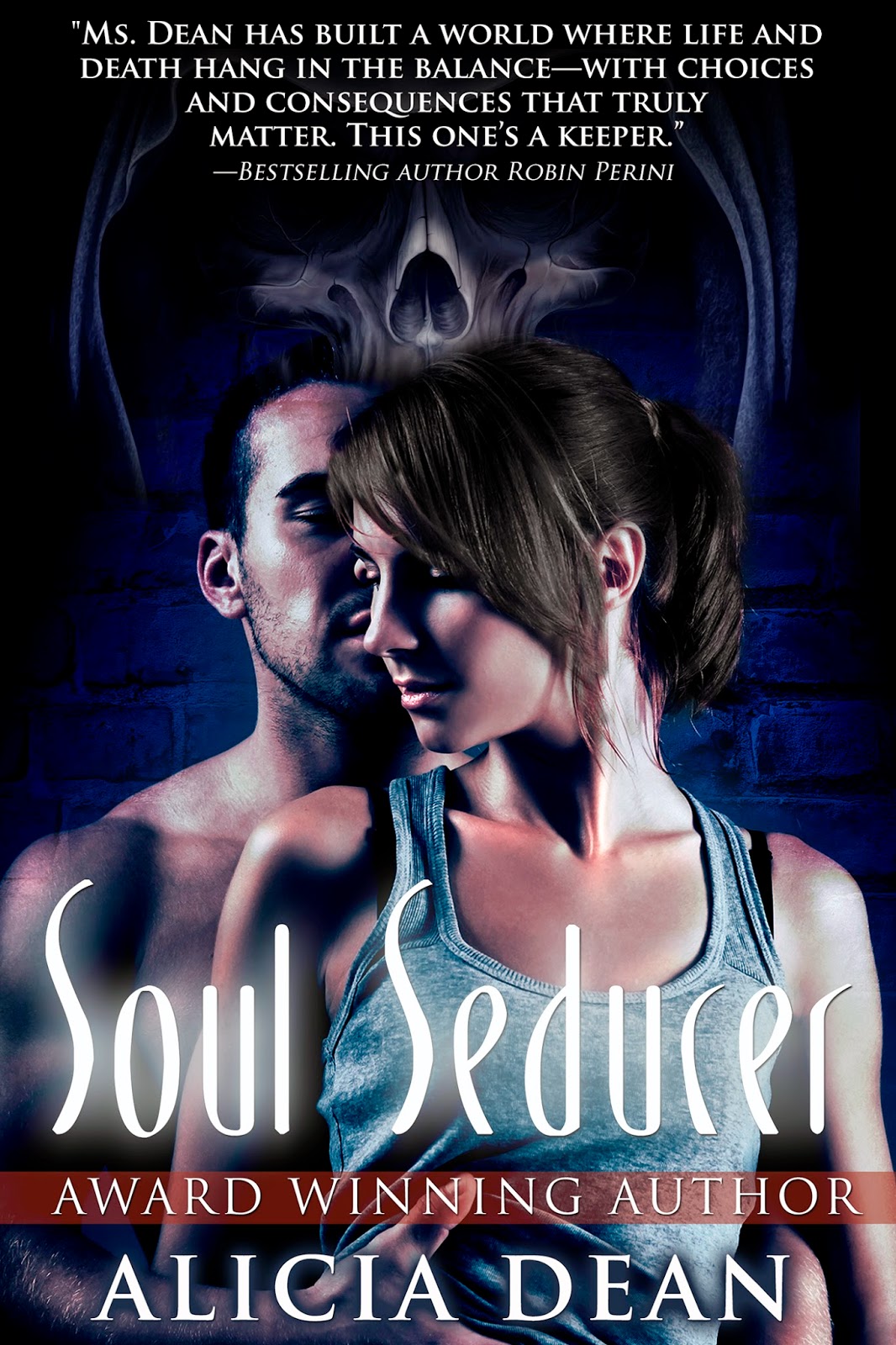 She spent her entire life fighting death. Now she’s falling in love with him…

Audra Grayson became a nurse in order to help save lives. But one night after a brutal beating, she almost loses her own. The near-death experience opens a door between the world of the living and the world beyond. Two Grim Reapers invade her life. One is charming, with the angelic blond looks of a saint and the black soul of a psychopath. The other is dark, dangerously attractive and, in spite of her distaste for his reaper duties, she finds herself inexplicably drawn to him.

When Audra's patients begin to die unexpectedly and her loved ones are threatened, she will risk her life—even her soul—to save them. But can she risk her heart to an inhuman being whose very purpose is to take those she is trying to save?

A crash and a scream sounded over the noise of the crowd.
Audra shot to her feet and stared in the direction of the commotion. At a Gyro stand near where Jaxon stood, a small group of people had started to move frantically, some in one direction some in the other. Between the sea of bodies, Audra glimpsed a toppled chair and the prone figure of a man.
A male voice shouted, “Give him room, people. Back off. Someone call 9-1-1.”
Jaxon rushed over to the source of the uproar, and Audra grabbed their belongings, heading to join him as quickly as she could, although her progress was slowed by her limp and the rush of people. Several had vacated their seats and were also moving toward the action, trying to get a glimpse of what was taking place.
Keeping an eye on her target, Audra was pushing her way closer to Jaxon and the hubbub when she spotted the blond ghost. She halted, her breath stalling in her lungs. What the hell?
He was closer to whatever was happening than Audra was. She peered through the mob and, just as she feared, the dark stranger was there, too. He moved through the crowd easily, which was no surprise. After all, ghosts weren’t hindered by mere solid objects. Anger contorted his face, his dark brows drawn over his piercing blue eyes. Forgetting the potential victim for a moment, Audra changed her course and headed toward the dark man, who was nearer to her than the blond. Once and for all, she would get some answers.
When she was within earshot, she shouted, “Hey, you!”
He whirled at the sound of her voice, his eyes momentarily widening in surprise, then he turned away and continued his course.
“Stop!”
Some of the people nearby cast her puzzled glances, probably wondering who she spoke to, but most of them were focused on the drama unfolding next to the Gyro stand.
She was almost upon the man now. “I said stop. You have some explaining to do.”
He barely spared her a glance. “I can’t talk now,” he bit out, still striding toward where Jaxon was administering aid to the ill man.
Before he’d covered half the distance, he came to a sudden halt, his fists clenching next to his sides. “Son of a bitch!”
Audra followed his gaze, and her brow creased in confusion. Through an opening in the crowd, she saw Jaxon crouched next to the fallen man, giving him chest compressions. The blond stood just behind Jaxon, his arms outstretched. Even from this distance, Audra could see an expression of complete rapture on his handsome face.
She looked back at her companion. Unlike the blond’s, his expression held abject despair, his shoulders slumped in defeat.
“Son of a bitch,” he muttered again.
“Someone,” Audra whispered next to him, “had better tell me what the hell’s going on.”
Posted by Alicia Dean at 9:42 AM

Yes, we have to let them struggle and work things out on their own. Even when we can, if we solve our kids' problems for them, it won't help them in the long run. Oh, LOVE that cover. Much better than the old one.

When bad things happen to our kids, the hurt we feel seems to be magnified somehow. It's torture when leaving them to figure things is our only option. You're not doing them any favors taking over. That cover is beautiful. And the excerpt....another for my TBR pile.

It is so hard to watch our kids struggle. Much easier, as you say, to adjust our own sails. Love the new cover. I read the original--you do indeed make her struggle.

Yes, Jannine. That's true. Although, I am guilty of solving some of their problems when I could. It's really hard not to. Thanks! I love it too. Steven Novak did this cover, and he's amazing!

I know, Margo. We wish we could take their pain upon ourselves, but it's true, we're not doing them any favors when we take over. Aww, thanks. I hope you enjoy!

Thanks, Diane. LOL. Yes, the poor girl had some trials and tribulations. :)

Mothers never lose sight of their kids--for better or worse. It's a GO
OD thing, right? Your Soul Seducer sounds like a real thriller-chiller. Love the cover!

Great post, Alicia, and so true. Once you become an old hand at adjusting, it gets a little easier sometimes. And it's a learned trait because no matter how we want to spare our children, it is something they have to experience and work through to get the hang of it. Like you said, time and pain is the only way to do that.

Very true, Susan. For better or worse. Thanks! Glad you like the cover. Yes, it's a bit of a chiller-thriller. :)

Yes, Lynn. As parents, we want to shield them from everything bad, even when they're grown, but many things are out of our control. They do have to learn to deal with adversity.

Intriguing story, the Soul Seducer! Also love the philosophies of learning to adjust one's sails, and also that we have to experience things in order to become who we are meant to be. No-one gets out of life unscathed :-)

Thank you, Glenys. Ah, yes indeed. No one gets out of life unscathed. Very well put. :)

Nothing is harder for me than watching my child suffer. I've tried not to be a helicopter parent but haven't always succeeded. As you said, after a certain point in their lives all we can do is listen and assure them things will get better (doesn't make it any easier for Mom, though).

So true, Alison. It's something that all mothers have to deal with, but it's definitely not easy.

My most major sail adjustment came when my triplets were born. Before that time I was ultra organized, always way early to everything, never forgot anyone's birthdays, always sent thank you notes...you get the picture. Somethings have to go when you have three babies to clothe, feed, and change and a two-year-old running around to boot! I think it's made me a better person, though. The old, uptight Mary was no fun! Loved this excerpt, Alicia! Might have to be next on my list... Have a great weekend!

I enjoyed your post. I know exactly what you mean when you talk about it's not easy to adjust sales for someone else--especially our children. The only thing permanent is change, so "adjusting" our sails is really a necessity of life if we want to survive and be happy. Good luck with your re-release.

Geez, MJ. I cannot imagine raising triplets. One baby is handful enough! But, I imagine it was more rewarding than it was difficult. Ha, I'm sure it did turn your old, uptight Mary persona upside down. :) Glad you loved the excerpt...hope you enjoy if you check it out.

Thanks, Judy. Well said. That's what I try to tell my kids. We're responsible for our own happiness, so whatever comes our way, we have to make the best of it and soldier on.

So sorry I'm late (again) in responding. You sure have had your share of adjusting sails. I hope things start to get easier for the "kids," soon. (Geez...isn't trouble with one at a time enough?!)

I meant to add, I loved "Soul Seducer" as well. I'll have to read the newer version with the cut scene! (And yes, I love the new cover.)