Roses and readers, please join me in welcoming our guest, Mariah Lynne.


A great story, a vivid imagination, and strong characters will transport your readers to distant times and beautiful places without ever leaving the comfort of home. Time Travel is better than air miles and there are no screeners, no rummaging through your luggage, and no uncomfortable seats. Just open to the first page and off you go!
I became hooked when I saw the Way Way Back machine on Mr. Peabody and Sherman. How wonderful to be able to visit ancient Rome or medieval England meeting warriors and kings. I love history and writing a story with part of it in the past gives me the opportunity to research and learn about local customs, way of life, and even the rules of romance. 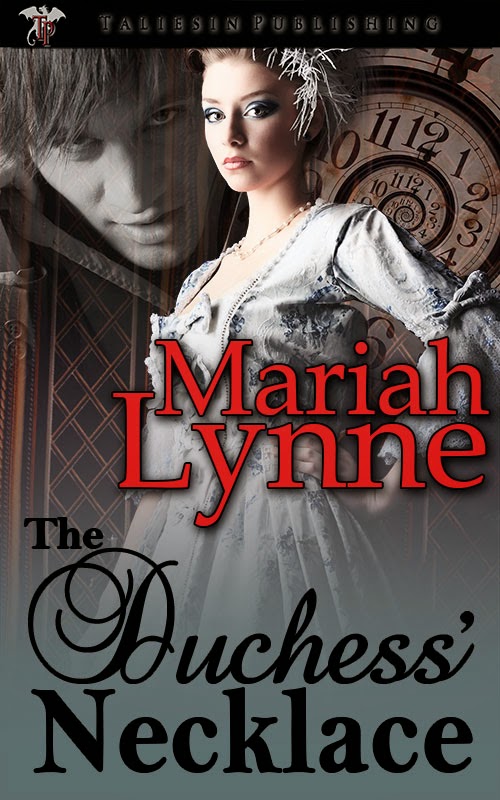 In THE DUCHESS’ NECKLACE (Taliesin Publishing), my duchess, Amelia Augusta Ethrington, Her Grace the Duchess of Abbington, is fourth in line for the British throne. In the 18th century, royal marriages were not as much about love as about standing and property. She refuses to marry not wanting to lose an ounce of her powers to a husband. Because of that, she has one night stands with traveling nights and younger men seeking her favor. She’s a very modern woman in an 18th century culture. She needs a modern man who will accept her for her intelligence, independence and feistiness. She needs a man from the present. The only way she will find one is through Time Travel.
Her Time Travel, however, is not for finding love but for seeking revenge and settling a score. A deceptive Traveler from the present spends time with her under the guise of a romantic tryst, only to steal her necklace which lays claim to her title and kill her guard before returning to the present. She Travels to get her necklace back: finding love is a side benefit.
The character of the Duchess evolved from a trip to Chatsworth House in Derbyshire. As I walked through the long hallways and visited the regal rooms, I wondered what life as a royal was like in the heyday of royalty. I then imagined what kind of woman my fictional 18th century duchess would be like. I prefer my heroines to be independent and feisty like Brianna Breeze in my first novella THE LOVE GYPSY (The Wild Rose Press). I then imagined how she would react to the main dilemmas in the plot. In a story I am writing now, the character of an evil wizard was inspired by a visit to Chenenceau castle in France. The castle boasts an apothecary also used as a poison room; a most delightful place for a villain to frequent.
I hope that you will decide to Travel with the duchess for a memorable romance.ng the Old
BLURB
Amelia Augusta Ethrington, 18th century Duchess of Abbington, fourth in line to the English throne, is considered by society an old maid at thirty two. She refuses to marry and relinquish her royal authority to a husband. Instead, she finds romance in trysts with total strangers.  Amelia’s sole entitlement to her duchy lies in an intricate and valuable necklace, The Abbington Jewels.  An unscrupulous Traveler wishing to steal the jewels and sell them at future prices seduces her, catches her off guard, and snatches the necklace.
Amelia must now risk everything to Travel to the present with the aid of a kind gypsy seer to find the thieving scoundrel, kill him and retrieve her title before her jealous male cousins lay claim to her duchy. Complications arise after she meets a handsome shy man, a museum appraiser named Ryan Redstone who was sent to acquire the jewels for The Smithsonian. Amelia falls in love with him but realizes she must focus on her quest to regain both her necklace and title. The Duchess is now faced with the most difficult decision of her life.

EXCERPT – THE DUCHESS’ NECKLACE
It didn’t take long for his carriage to reach the riverfront. We stopped. Ryan leaned over and kissed my cheek whispering in my ear.
“Let’s go back to my room. It’s just upstairs. You can tell me what your secret is in private. I trust you and hope you trust me.”
Ryan helped me out of his carriage. We climbed the one flight of steps up to his room. Once inside, I sat down on the bed and stared out the window before giving him a serious look.
“This is not how I planned to tell you. I hoped to wait until we saw if the necklace was genuine. You must listen to me before passing judgment. I hope that you will still want to keep me in your heart afterward. ”
Ryan closed the drapes before sitting down next to me.
“Amy, how could I help but keep you in my heart no matter what your secret is?”
He squeezed my hand as I touched his lips with the gentlest kiss. Ryan filled me with a deep passion. I was ready to reveal my desire for him. I hoped he felt the same way.
I knew what I wanted and decided to show him how I felt in a special manner. Standing up, I slowly removed Starr’s silk floral sash and placed it around his neck. I stepped back to dance the seductive dance of the gypsy women who camped outside my childhood manor house grounds. They had always looked graceful, bracelets jingling, ribbon colored skirts twirling as they turned and twisted by their campfire in the moonlight. They seduced traveling knights and lesser royals hoping for romantic trysts out of their coin. I had heard the gypsies’ haunting songs and desired to get a better look. I became quite good at sneaking out night after night, hoping not to get caught. I watched them dance, hiding in some nearby bushes. One night, a beautiful gypsy spotted my hiding place and grabbed me. To my surprise, she had me stand and taught me their dance.
I wanted my necklace but strange as it sounds, I wanted Ryan more.
BIO
Ever dream of traveling through time? Mariah Lynne does. She writes stories that take her readers along on exciting journeys. Travel to distant times and beautiful places with strong-willed independent heroines whose memorable tales will entertain with twisted plots that dabble in the paranormal. Both of her novellas, THE LOVE GYPSY and THE DUCHESS’ NECKLACE, fit that description to a T.
A Graduate of Syracuse University, Mariah lives on a beautiful Florida Gulf Coast Island where she wrote weekly entertainment columns for two island newspapers. She loves where she lives and has Southwest Florida take center stage in her stories.  She is a member of Romance Writers of America and the Southwest Florida Romance Writers who recently published an anthology: “From Florida With Love Sunsets and Happy Endings.” Mariah’s short story “Love At First Flight” is included.
When she is not writing, she enjoys swimming, traveling and spending time with her husband and dolphin hunting dog, Max. To learn more about Mariah and her Time Travel adventures visit her at:
http Website: www.MariahLynne.com
Twitter:@mariahlynne1
E-mail:MariahLynneAuthor@yahoo.com
Facebook: https://www.facebook.com/pages/Mariah-Lynne/295721153858612

BUY LINK TO PUBLISHER:
http://www.taliesinpublishing.com/the-duchess-necklace-p18.php
BUY LINK TO AMAZON:
http://www.amazon.com/Duchess-Necklace-Mariah-Lynne-ebook/dp/B00GINZY2C/ref=sr_1_2?s=books&ie=UTF8&qid=1383838928&sr=1-2&keywords=the+duchess%27+necklace
BUY LINK TO BARNES AND NOBLE:
http://www.amazon.com/Duchess-Necklace-Mariah-Lynne-ebook/dp/B00GINZY2C/ref=sr_1_2?s=books&ie=UTF8&qid=1383838928&sr=1-2&keywords=the+duchess%27+necklace
Posted by Brenda Whiteside at 3:00 AM

Amelia sounds like a strong, take-charge heroine! Best of luck with sales.

What a fascinating character. Wishing you much success.

I love that she's a woman ahead of her time, then becomes one, literally. :) Fantastic cover...best of luck!

I love time-travel stories! Like you, I love when I'm transported to another place and time and don't have to get out of my PJs!

Fascinating post and a terrific excerpt! Thanks so much.