What’s your family like? Do you ever feel like you live in a cuckoo’s nest, or that you’ve escaped from one? If you’re honest, the answer is yes. We all do. At least some days.

And what about your characters? Do they spring forth into the universe fully formed, like Athena from the brow of Zeus? Of course not. They have families that form them, shape them, and drive them crazy. It’s part of a writer’s job to poke and prod our characters until we understand the complex dynamics of their families, even if we never use that information directly in their stories. Families make our characters who they are.

Before I begin a new story, I write up a sheet for each character; the more important the character, the more detailed the sheet. For the main characters, I always include information about parents and siblings—possibly even grandparents, aunts, uncles, and cousins. Whoever is important to that character. I need to feel how my character felt growing up in his or her family. As I write the story, I add whatever details I need to the character sheets and keep them front and center on my desk.

Although I’ve written several historical romances in the past, I am currently writing romantic suspense. Many successful romantic suspense authors choose to focus on the hero, the heroine and the villain to intensify the suspense. Not me. I throw in the whole crazy cuckoo’s nest. 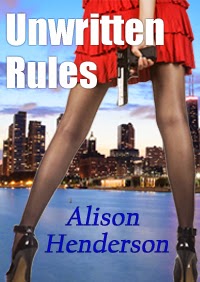 In UNWRITTEN RULES, the hero’s mother takes out one of the villains with a well-thrown fastball borrowed from her son’s childhood bedroom, and his grandmother is engaged in an ongoing battle of wits with the next-door neighbor, who keeps leaving pennies in her freezer. However, despite their eccentricities, these women have been the most important people in the hero’s life, and his deep love for them helps convince the heroine he’s capable of the kind of steadfast, enduring love she’s looking for.

Cuckoo or not, family members can be a rich source of wonderful secondary characters. I love writing them, whether they provide behind-the-scenes conflict or front-and-center comedy. How about you?

Still love that cover. When I do character sheets for my characters, people and things I don't expect come out. Makes the writing fun!

I am completely intimidated by your organization. My character sheets say something like "red hair, 30-something, scared of clowns". :-) But I do love the creation of families and not knowing how they're going to come out.

Very true. As in real life, families do shape our characters. I should focus on that aspect of my characters more, but have only done so in a few of my novels. Haha, I love the eccentricities of the characters in your book.

While I don't do "official" data sheets on my characters, I do keep a file on them. As they reveal themselves, I make notes in the file. Eventually, I get to a point where I have to know more. That's when I do a more in-depth study of what makes them tick. Love your analogy with Athena. Knowing our characters' families makes them richer. BTW, I loved Unwritten Rules. :)

Most of my books have family members featured. I really do think it adds depth to our characters. Hmm, I always intend to do awesome character sketches before I start writing, but I'm afraid they end up like Liz's! LOL Bullet points at best.

Margo, I know what you mean. My character sheets grow and grow with all sorts of unexpected details.

Liz, I do it not so much because I'm organized (though I guess I am), but to try to stave off writer's block. It doesn't always work, but if I wonder what a character might do or feel in a situation, I can check the sheet and get a clue.

Alicia, I try to include character eccentricities for originality and humor. It's safer to add those to the secondary character, so my hero and heroine don't come off as too nutty.

Diane, it does take quite a while for the characters to fully reveal themselves no matter how much I write in advance. Sometimes they turn out to be quite different from what I expected.

Jannine, my character studies are far from awesome, but at least they're a place to start. They're about a page at first, and LOTS of bullet points!

What a great tip, Alison! I don't usually think of families purposely, but mostly if they happen to pop up!

Sounds like a great way to round out the story. Lots of interaction holds my interest.