Sometimes a Little Crazy Can be Fun!

When I create characters, I love to give them a secret crazy button that resides deep inside their psyche and is always halfway pressed.

A man with a secret – maybe he panics when he sees a spider, like Sixto in Dancing in a Hurricane. Imagine a hot, sexy guy who’s afraid of a tiny little arachnid!

Perhaps the woman’s crazy button is when a man lies to her, the way Sixto does to Bree in the same book. When she finds out, she starts packing.

Letting the reader know what the crazy button is, but not letting any other characters know, is a fun way to keep the plot interesting.

Here’s a little sample of a crazy button going off from Dancing in a Hurricane: A loud metallic banging woke Bree. She lifted her head and a dull pain in her brain made her close her eyes again. The events of last night flooded back and she was surprised she didn't feel like a twice-dead zombie.

Spread around on her blanket, sandwich meat, cheese, and bread looked like it had been smeared by a toddler.

Hearing the metallic sounds again, she got up and peeked out her shades. Sixto pulled a stepladder out of the pool, his elbow and knee dripping blood. She slid open her patio door and walked out. "What happened?"

He stopped and looked at her before lifting the ladder. "I fell."

Both his knees had scrapes, as well as one elbow and one palm. "What were you doing?"

On the ground lay five strings of decorative lights: paper lanterns, chili peppers, flamingos, palm trees, and dragonflies, zip-tied together, ready to be strung on hooks around the undersides of the gutters. She smiled. "How fun!"

He gave her a resigned look. "I'm going to need your help with something." 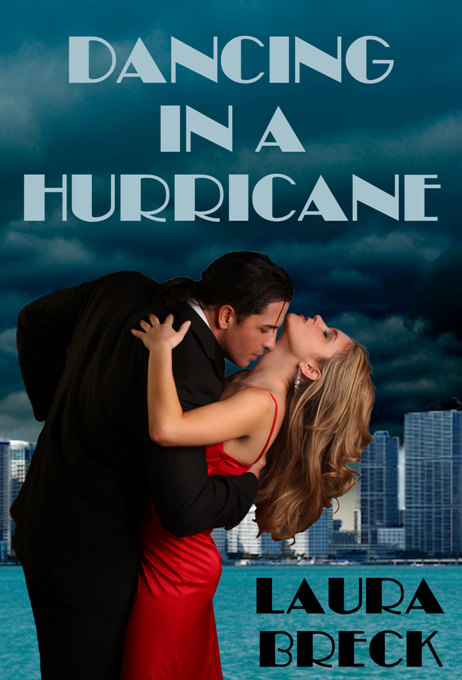 "It will only take a second." He walked behind the bar and got the broom. He went to the corner where the light strands hung down and pointed. "See up there?"

She squinted, but nothing looked strange. "No."

He handed her the broom. "Get closer. There's a spider web."

She looked at him. "You want me to sweep away the web?" That couldn't be all he needed help with.

"Yes. Then take this…" He tore a piece of paper towel from a roll on the table. "Smash the spider and flush it down the toilet."

She laughed. "Should I put a voodoo curse on it too?"

His eyes narrowed. "Just do it."

She sobered. "Sweet fancy Moses, you're afraid of spiders?"

"No." He crossed his arms. "It's a Cuban religious thing. We aren't allowed to interact with them."

"Interact?" She pointed to his room. "You show me that in your Big Book of Cuban Religious Facts and I'll write you a check for a million dollars." She grinned. "Wait." The smile left her face. "It's not poisonous, is it? You're not trying to kill me."

He rolled his eyes. "No. Our asshole exterminator said they're harmless. I tell him to spray for them, but they keep building webs."

"What?" His brow furrowed.

"They spin webs, they don't build them." She loved this—Sixto had a quirk.

"Whatever the hell they do, you need to get this one out so I can finish decorating. The family will be here in two hours."

"Okay. Don't bust a carotid." She walked up to the corner, swept the web onto the broom, and turned around.

He stood in his room looking out at her from the closed patio door.

She snorted and laughed until tears ran down her cheeks.

He pointed to the paper towel, but she shook her head. She considered herself an arachnoterian. She walked through her room, spinning the broom to keep the spider on top, went outside through the garage, and let the arachnid go on the hedge.

She turned to go back into the house and saw a couple walking down the street. Great. Here she stood in her nightgown, apparently sweeping the hedges. She waived. "Hi."

They waved back, looked at each other, and walked away a little faster.

"Nice way to meet the neighbors, Bree." She went back into the house and out to the pool. Sixto used a flashlight to inspect the undersides of the gutters.

"Okay, Spiderman. Come in here so I can patch you up."

He turned off his flashlight and walked to her door, checking out his elbow and palm. "Shit."

"Much better." She smiled and led the way into her bathroom.

"What are you so happy about today?"

She pulled out her first aid kit. "Thanks to you, I'm not hung over." She doused a couple cotton balls in rubbing alcohol and grabbed his hand. "This is going to hurt."

He flinched, but didn't say anything. She wiped slowly and held it closer to the light. "Not too bad." Using a pile of cotton balls, she did the same to his elbow and his knees.

His left knee was gouged pretty deeply, and she knelt to get a better look. She brushed a fleck of dirt from it."

She smiled up at him, amazed at how overwhelming he looked from this angle. "Shall I kiss it and make it better."

His face tightened, his eyes narrowed and darkened.

Oops, that probably wasn't the best thing to say with her lips in close proximity to his package. Swallowing, she stood, rooted through the first aid kit, and picked up the spray bottle of Neosporin. When she looked back at him, he focused on a spot on the wall.

She sprayed his scrapes quickly. "Do you want me to bandage any of these?"

He looked at his knees and elbow. "Just my hand. I have to cook."

"Okay." She found a large Band-aid and opened it, he obediently held up his hand and she glided the bandage on and cradled his hand in hers, smoothing the ends on his skin. "All done." Looking up into his eyes, she got lost in the warm, sweet emotion. She'd like to hold his hand a few minutes longer, but she released him.

He turned his hand and caught hers, he was so close she could feel his breath on her cheek, smell the onions he'd eaten. He swallowed. "Bree, I've been doing a lot of thinking. About us.”

Email ThisBlogThis!Share to TwitterShare to FacebookShare to Pinterest
Labels: Cuban-American, Dancing in a Hurricane, Laura Breck, Miami, multicultural romance, The Roses of Prose Where Romance is Never Out of Season

Really funny scene, Laura. My husband will kill spiders, but he freaks out a little when he sees them. I just roll my eyes and squash them. Love your idea about a crazy button. I'm going to have to steal that one.

Haha, great excerpt. I also love your idea about a crazy button. I think I do that, sometimes, without calling it that, but I should make an effort to include some kind of crazy button for my characters. Like Jannine, I'm stealing your idea. :)

First, I agree with Jannine and Alicia, on both! My personal crazy button is food that looks disgusting...like the albumin in an egg,it grosses me out big time. ... Um, excuse me, need to go now. :-)