The Sanctity of Sidewalks by Vonnie Davis

We have rules governing sidewalks here in America. We tend to hold them sacred. They are for pedestrians whether on foot or in a wheelchair and their dogs. We tend to smile at tykes riding their tricycles, but frown on grown-ups on bicycles and teens on roller blades or skateboards on our cement walkways. I'm beginning to think our sanctity of sidewalks is an American tradition.

From the time our taxi driver pulled away from the curb at Charles De Gaulle airport until he made a sweeping U-turn in front of our apartment on rue Bertholet in the Latin Quarter, we'd been on the sidewalk four times. Not that I wasn't counting or saying a few prayers myself. Other cars, horns blaring to jar pedestrians out of the way, and motor bikes, buzzing through traffic like bumblebees on steroids, made several detours onto the sidewalks, too.

Traffic in Paris is not for the faint of heart. For one, there are no lines painted on most of the streets, or rues. I mean, really, why bother when no one cares what lane they're in? At one point yesterday, four cars braked sharply, their noses angled inward to vie for a certain spot. There we sat, hood to hood, eyes locked in challenge, horns blaring and hands gesturing to the "Parisian God of Traffic".

Even so, as we drove--gee, that's too lame of a word. As we ping-ponged through traffic, we saw the Eiffel tower standing majestically when we crossed the Seine. We passed Calvin's favorite writing café on Boulevard Saint Germain, when he was here on sabbatical for a year back in 1968. Like a child with his nose pressed to the glass, he craned to study every angle, murmuring, "I remember...I remember." We also passed the Hotel Madison where I'd set a scene in my MONA LISA'S ROOM. Although I'd never been inside, their website provided enough photos for me to add some accurate description. 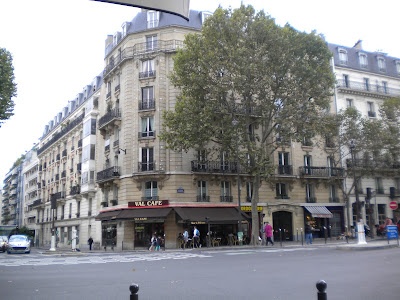 I think we both breathed a sigh of relief when we entered the apartment we'd rented online. All of the pictures were accurate. We're on the third floor American, second floor European, hidden behind the lower limbs of the tree. The elevator is two feet by two and a half feet, if one counts the tile on the floor. If we have no luggage, Calvin and I can both squeeze into it, face to face, buttons jabbing, breaths mingling and arms wrapping around each other. Kinda reminds me of our honeymoon, but we won't go there... 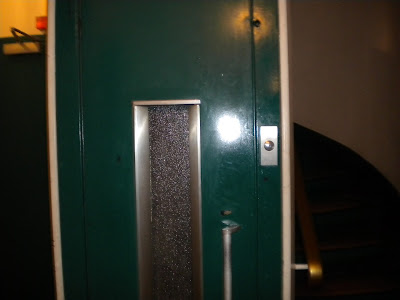 Our largest suitcase had to be wedged into the elevator while Calvin waited upstairs. I sat on the luggage and pulled my knees up to my chest, so the door could close. Ladies, I hadn't been in that position since giving childbirth forty-one years ago. 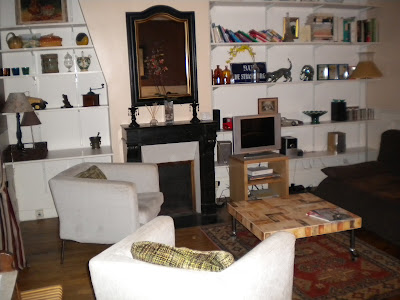 Here's our living room. By the books on the shelves in both the living room and bedroom, the owner is English speaking. He or she likes Stephen King and Danielle Steele and is an adventurous cook by the number of cookbooks displayed. We brought along copies of our books to leave as gifts. We'll be here for two weeks before traveling to Berlin to visit Calvin's son, Kelly. It's been slightly over two years since Kelly and his wife were in the States, so Calvin is eager to set eyes on him and spend hours catching up.

Until then, you'll find us wandering the streets of Paris with no destination in mind, stopping for a cup of whatever to watch humanity stream by. I'll be journaling my every impression, sight and smell of my second journey to the City of Light. I'll share more with you the next time around. 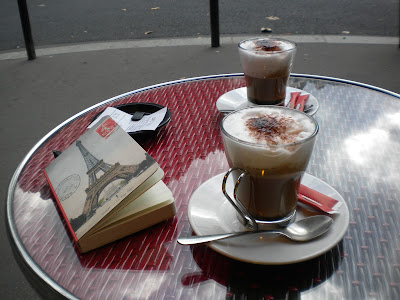 Have a wonderful time, Vonnie--and stay off the sidewalks! LOL Looking forward to hearing more about your trip.

What a wonderful vacation! Have a great time, then be sure to share about your experiences.

Thanks Jannine. We went to Shakespeare and Company today and will return again tomorrow for pics as we give them a couple copies to sell. We also visited the neighborhood where Calvin once lived.

My earlier comment to Jannine wasn't too clear...too tired to think. We're taking copies of our books to sell.

Margo, Calvin and I always have a great time together. We see things so many other people miss, it's either our creative bent or our weirdness. We haven't figured out yet.

I can just hear your taxi ride and see your faces! OMG I'd have a heart attack. lol I cringe and have to shut my eyes when hubby drives our rush hour traffic! You have to take a pic of the INSIDE of that elevator. lol

So envious, Von. You'll have such a good time! Yes, the traffic and small rooms are always issues in Paris. That's why everyone is out and about...on foot :-)

Oooh la la! Sounds like you're having a wonderful time. Those pics make me even more jealous. Too funny about the sidewalks!

How very cool, Vonnie! Thanks for letting us share virtually! :-)