ACTION, SWEET ROMANCE, AND CATS, ON A SPACE STATION by Vijaya Schartz

Please welcome, Vijaya Schartz to the Roses of Prose. 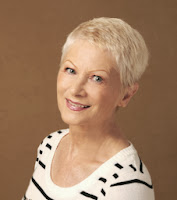 I did not create the Borealis Universe. My publisher did. Yet, I love it, and I love writing these novellas. The first I wrote for this Desert Breeze series was BLACK DRAGON, and this month, my second Borealis Novella is out, titled: AKIRA’S CHOICE.

The Borealis space station itself is a character in each novella. I would compare these stories to episodes of Deep Space Nine, or Babylon Five. Mine are full of action and adventure, kick-butt heroines, oh-so-gorgeous heroes... and cats. I couldn’t imagine life without cats, so what better pets to bring on a space station, right? In Black Dragon, the hero struts like a dandy with a white angora cat named Marshmallow (that’s part of his cover). And in Akira’s Choice, my heroine, a Samurai Bounty Hunter, hunts criminals with a cheetah retriever by the name of Freckles.

Borealis is a decrepit space station at the fringe of conquered space. Yes, conquered. It’s the 2600s AD, and man has ventured way beyond the solar system. Most known and livable alien planets are now inhabited by human settlers... and human hybrids who mixed with the original population. The TPP (Trans Planetary Protectorate) controls everything with an iron fist, and is not above genocide to maintain its military supremacy for the privileged classes of the human race.

As far as Space Stations go, Borealis is falling apart. The lower levels also include a penitentiary for the most dangerous criminals in the galaxy. The TPP struggles with a rebellion, as more oppressed planets fight for their civil rights. Most of the resources go into the fight on both sides, and there are no funds left to maintain the civilian infrastructure.

With such a backdrop and already defined universe, it’s easy for me to think up characters like Czerno Drake in Black Dragon, a rebel parading as a dandy for a secret mission. Or my Samurai bounty hunter heroine, looking for a child kidnapper in the seedy lower levels of Borealis.

Before writing each story, I voraciously read the previous installments (some of which from other Desert Breeze authors), to refresh my memory, and incorporate as many elements previously established as possible. Only a few characters are constants on the station. Each novella is a love story and introduces a new couple. These are sweet romances (only kisses). And at the end of the story, the two love birds leave together. 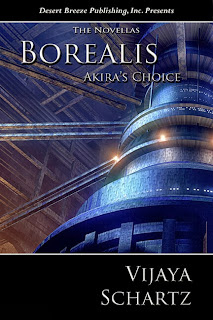 When bounty hunter Akira Karyudo accepted her assignment, something didn't add up. Why would the TPP want a kidnapped orphan dead or alive?

She will get to the truth once she finds the boy, and the no good SOB who snatched him from a psychiatric hospital. With her cheetah, Freckles, a genetically enhanced feline retriever, Akira sets out to flush them out of the bowels of the BOREALIS space station. But when she finds her fugitives, the kidnapper is not what she expects.

Markku, a decorated rebel soldier, stole his nephew from the authorities, who performed painful experiments on the boy. Stuck on Borealis, he protects the child, but how can he shield him from the horribly dangerous conditions in the lawless sublevels of the decrepit space station?

Akira faces the worst moral dilemma of her career. Law or justice, duty or love. She can't have it both ways.

You can find Vijaya here:

Welcome to the Roses of Prose. You bring some fantastic and fascinating ideas with you. The series sounds like great fun. Best of luck!

Congrats on your new release! It's a lot of fun writing for a group series. Best of luck with sales.

Thanks, Margo and Jannine, for your kind words and welcome. It is fun writing for a publisher series and I enjoy every minute of it.

Sounds terrific! Czerno Drake sounds like a hoot! :) I have to say, Babylon Five is my all-time favorite sci-fi series. It was plotted perfectly, from start to finish. And I can't imagine a world without cats either!