Memories of a Farm Inspire a Novel by Jody Vitek

Roses and Readers, join me in welcoming Jody Vitek to our site today. 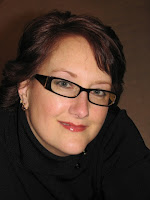 Thank you, Brenda and fellow Roses, for having me here today. It’s great to be back to share my latest release, Rescue Me, a contemporary romance set in Minnesota.
The idea of this book came from wonderful childhood memories of visiting my great aunt and uncle, my second cousins and their grandparents. Grandma and grandpa, as my brother and I called them, lived on the farm in a small separate home a few steps from the old farm house. They had cows and chickens, and if memory serves me correctly, pigs too, and farmed acres of land.
Farmland is being eaten up by new housing developments throughout the state and it saddens me because where else will we get our crops. But, most children don’t know what a farm smells or looks like other than what they see in pictures. My great aunt still owns some of the farm, and I have taken my children to see where I spent some of my time as a youth. Unfortunately, the barn and farm house have been condemned for safety reasons, but they enjoyed seeing it all. They were a bit envious that I got to experience the farm and they didn’t.
At the Minnesota Zoo, visitors can experience and learn more about farming and farm life, but it’s not the same as living it. Okay, so I didn’t truly live a farmer’s life but more so than my kids ever will. There’s nothing better than smelling the pungent odor of manure or hay bales in the hay loft. So maybe there are other, better smells than those but they always remind me of my childhood and bring a smile to my face.
Do you have a childhood smell or memory that makes you smile? Leave a comment, with your email, for a chance to win a $10 Amazon gift card.
********************************************
At this time, Rescue Me is only available through the publisher, Melange Books, LLC. Look for it later at Amazon, Barnes & Noble and other sites.
You can find Jody on Facebook: Jody Vitek Author, on Twitter: @JodyVitek and you can email her at: info@jodyvitek.com
Bio:
Born and raised in Minnesota, Jody remains close to home, living with her husband of more than twenty years as well as three children and a cat named Holly. Growing up, she enjoyed reading V.C. Andrews' Dollanganger series, S.E. Hinton and Stephen King to name a few.
She’s traveled throughout the United States, to the Bahamas and Cancun, Mexico. Between watching soccer games, scrapbooking and being the COO of the Vitek household, she writes contemporary romances. 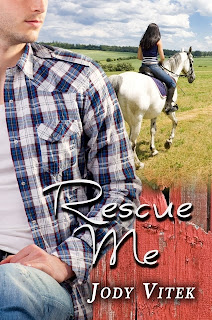 Excerpt:
Sunday morning Catherine strolled to the barn. Opening the red wooden door, the strong smell of fresh hay engulfed her. Her senses came to life. She closed her eyes and inhaled deeply. The memory of children’s laughter played in her mind. Eyes opened to see the rope hanging from the rafters where they would swing and drop into the hay piles.
Eyes down now, shuffling along the floor, she remembered the trap door that led into the stalls below. The well-worn iron ring was cold to the touch. She lifted the heavy door by the ring, letting it fall back with a thud on to the wood floor. Peering through the opening to the cement floor below, she missed the sounds of cows, pigs and chickens. Nothing but emptiness now.
Despite the silence, she heard something. And it wasn’t her imagination.
Mewing from the haystacks. At the edge of the stacks, straining to hear for a sense of what direction to look, she climbed and moved to the left. There they were—a litter of kittens. She guessed them to be at least four weeks old. Mama cat wasn’t around, probably out hunting for food. Catherine wouldn’t intrude on the small family; however, she would periodically check on them.
Outside, she hopped down over the wood retaining wall where the slope was, as the barn was built into a hill. Although there were no cows, the aroma of manure was present when she strolled through the lower level of the barn. Her hand ran along the round metal gates of the cow stalls. This would’ve been the horses’ new home. Saddened by the thought, she exited the barn.
She hustled up the slight incline, approached the swing and yanked the heavy ropes to test them. A little weight on the seat and a tight grip on the side ropes, in case the seat failed, she kicked out and set the swing in motion.
The old school bus parked by the shed caught her attention. She and the foster kids had played school in the thing for hours on end and take turns being the bus driver. Catherine smiled at the memory. They all loved pretending to drive and pull the lever to open the door, which would make the Stop sign pop out from the side.
Posted by Brenda Whiteside at 7:00 AM

Good morning Roses and commenters!! I'll be checking in throughout the day. I'm attending a writing workshop, so I may be sporadic.

Welcome Jody. Enjoy your workshop. As a big city girl who chose to live and raise her kids in the country, I can attest to everything you've said. Even the smell of manure in spring has its own type of charm. Best of luck with your latest.

Hi Jods,
I have really good childhood farm memories, too, but mine are from visiting my best friend's aunt and uncle's farm in Dassel, MN. It was a true working farm so we got to go drive in the cows from the fields and help milk them and then feed the pigs and chickens. There was a haymow and lots of room for running around. We didn't get to go but once in a while--but it was always an awesome time! Glad you got to spin your memories into a story--can't wait to read it!


Wonderful memories. My neighbors in Connecticut were farmers and the smell of manure and fresh cut hay bring it all back. Goof luck with your book. It sounds great.

Margo thanks for confirming my memories are still accurate about the farm. Liz, I'm glad you got to experience the farm life once in awhile. Cows are fun and fascinating animals. Barbara, manure may not be the best smell but it's natures fertilizer.

Thanks for stopping by ladies!

Welcome Jody! I've always been a city girl, but when I was very young our next door neighbor had a hobby farm where he raised a few sheep. I have vivid memories of going out to see the lambs in the spring. I thought they were so cute, but stinky.

Nice blog post! Sounds like it must have been great growing up on a farm. It's too bad the farms are disappearing, but it's great that you've captured the essence of farm life for future generations to enjoy.
:)

Alison it would be interesting with sheep but I agree with smell not being pleasant.

Thank you for stopping by and commenting today. It was fun to be able and write a book sharing a wonderful part of childhood.

Congrats on your new release. My grandparents had a farm when I was growing up, so I do remember the smell of fresh manure!

Jannine, thanks for having me here again. I find it interesting that all us remember the smell of manure. But how could you not remember. ;-)

Sorry I missed you yesterday, Jody. Sounds like a terrific book! I never farmed, but I did used to grow a pretty mean vegetable garden, back when I lived in the Garden State. Nothing like sweet Jersey corn right off the stalk. :-)

Leah, thanks for letting me visit and share on the Roses blog. It was fun, as always. I don't care to have a vegetable garden, yet love the homegrown goods. Corn on the cob is one of my favorite veggies. I love eating it plain. No butter or salt, unless it lacks the sweetness it should have.