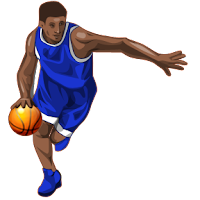 We love March Madness here at our house. We love sports, period. With a grandson who is the home run king of his Little League team, another who qualified for States in wrestling as a lowly freshman and a granddaughter who is on a collegiate bowling scholarship, how can we not? From what I've heard from Calvin's old classmates at high school reunions, he was once a basketball jock. Perhaps that's why he loves basketball. And, as someone who has all the coordination of a caterpillar on Jack Daniels, I just love to see people who can run and talk at the same time. Me? I can only talk.

I love the energy, the agility, the athleticism of the games. I rarely miss a collegiate basketball game--men or womens.

I especially enjoy the MEACH (pronounced me-ack), a conference which mainly comprises smaller colleges. It was a well-dressed older gentleman who won my heart at that conference. Each year, Mr. MEACH, as he's so affectionately called, arrives at the convention center with racks of clothes. Yes, clothes. The man puts on a fashion show that would put the runways of New York and Paris to shame. He may don a red suit, red shoes, black shirt and red and black tie, top it off with a broad-rimmed red fedora and, with red cane in hand, step and stroll through the crowded bleachers. Pictures are taken. Smiles are shared. Cheers turn away from the players and toward this octogenerian. An hour later, he'll be in aqua and yellow or purple and pink. Oh, I'm telling you, he makes an amusing peacock. He has ladies who sew most of his suits. According to the newscasters, Mr. MEACH works on his many costumes all year long.

Well, why not. His colorful fashion show-off-manship makes people smile, just as my stories sometimes make people smile. No doubt he gets the same souldeep satisfaction from all the "oohs and ahhs" as I get from someone saying you made me laugh outloud.

I wonder if the man is exhausted at the end of the tournament, constantly changing clothes and making sure every detail of his outfit of the hour is perfect? Questions like that plague me somewhat this year. Questions like when has one had enough for awhile? How does one find balance? What's the difference between ambition and obsession? You see I've reached the point of mental exhaustion in my writing. In less than three years, I've written and contracted eight books. Suddenly I can't write one more emotion--humorous, romantic, painful or suspenseful. And I am playing my own version of string music this year. Strains of my favorite violin solos float from our stereo as I take a break from writing. I'm hoping a month of living life will do the trick. My house is certainly enjoying some deep cleaning. Plants are getting repotted. Closets cleaned. The yard is garnering some special pre-season attention. It's nice to step out of the writing cave for awhile and "see" life. I'm seeking balance. This month I'm putting my own ending to March Madness.
Posted by Vonnie Davis ~ Romance Author at 10:49 AM

Good for you for knowing when enough is enough. With two girls involved in multiple activities in the house, I get breaks forced upon me. Probably a very good thing! Have fun on your down time.

Thanks Jannine. As I was trying to wrap up a story, I honestly couldn't think of another sentence. I went to bed for four hours, got up and finished it. Then said, "I'm done. I can't keep this pace up anymore." I've been busy planning a trip to Paris. We just got our apartment reserved today and I am off the scale excited. Can not wait for September.

Hi Vonnie,
Hitting the wall can hurt your nose. I know. I can't tell you what to do to refuel. You know in your heart what you really need, so do it. All those other stories are waiting for you to write them.
Rest and recover.