To most people, March Madness has something to do with Basketball. At least that's what came up when I googled it. Not my thing, though. When it comes to sports, if you want me to play football, baseball, or basketball, I'm all for it (or was some years ago. I'd probably break something now). If you want me to sit and watch, nope. It ain't happening. I'll watch drag racing. Anything else, no thank you.

March Madness in my neck of the woods will include, but is not limited to, editing and hopefully releasing my latest book, DAY LABOR,  attending a business luncheon to learn how to be better at business since I own and operate a used book store, a children's clothing store, and an answering service that is in litigation due to an upset competitor (long story best left alone for now). The court date is in March. My youngest child will be turning twenty-one on the twenty-third.

DAY LABOR is the product of the 2011 NaNoWriMo. It is a story that I wrote in my head some time ago after seeing a young man standing on the street corner with a nicely lettered sign that simply stated "DAY LABOR". He was dressed in jeans, a denim jacket and work boots. He looked ready to work at a moments notice and I was impressed by his smile and attitude as he tried to hustle some form of employment. Most of the guys like this in my town don't even stand up. They sit on the curb and hold up a scribbled sign that can hardly be read.

I saw him and he stuck in my mind. In the time it took me to drive from that corner, approximately three and a half miles to my house, I had most of the outline finished in my head. I love it when that happens. I dashed off my notes into the computer and promptly forgot about it, until NaNoWriMo came up about two years later. Now was my chance to make the story come to life. I had watched the entire "movie" in my head several times so I know it wouldn't take long.

It took me twenty-nine days to write the first draft of DAY LABOR. It is probably considered to be chick lit. After polishing and buffing and sanding it into shape, I was please when it was accepted by Red Rose Publishing. Now the real work will begin. I've been contacted by the editor and await the first round. Needless to say, I'm excited.

With luck, DAY LABOR will be released in March and I'll have eight books to brag about, I mean promote. I'm sorry I don't have any cover art yet, but I'll share it as soon as I have it.

Wish me luck and not too much MADNESS!

How far should a woman go to give the man she loves everything he wants? Beth does what ever it takes to assure Mark's happiness. With any luck, he will never know what she's done to give him what he wants most.

How far should a man go to provide for the needs of the woman he loves? Troy will do what ever it takes to provide for his wife during her high risk pregnancy. With any luck, she will never know what he's done to give her the best care money can buy.


“Breakfast is ready.” Beth called down the hall and watched as Mark trudged toward her, tucking in his shirt tail. As he passed her on the way to the kitchen, he gave her a weak peck on the cheek. “How romantic.”

“Best I can do. Apparently I’m not good for much any more.” He dropped into the chair at the table, and took a slow drink of his coffee.

Beth grimaced. “Now you're sounding like Grant. You’re great at a lot of things, Mark. Why are you letting the whole thing get to you like this? Does this challenge have anything to do with Grant and that stupid letter almost a year ago?” She sat at her place across from him, and took her fork in hand.

“Grant has nothing to do with me being a failure. That’s all on me.” Mark poured syrup on his pancakes. He took another drink of coffee, his gaze on his plate.

“This all started with that letter. Did he tell you that if you had a baby in a certain amount of time, you’d get into his will?” She huffed as she grasped at any idea that would explain why the urgency and pressure. “Tell him to stuff it. We don’t need his money. We’ve got plenty of our own.”

Mark shouted, “It’s not the money.” Beth jumped at his out-burst, and dropped her fork into her plate. “I want a baby!” Mark stood abruptly, turned and left the room.

Beth remained at the table, unable to understand what just happened. Mark had never raised his voice to her before. Tears pooled in her eyes as she sat stunned. She waited for him to come back into the room. She could hear him gathering his things for work. She’d wait, and give him some time to calm down. She tensed when she heard his foot falls coming down the hall. He stopped at the kitchen door and stared at her for a long moment.

“I’m sorry, Beth. I don’t know why this is eating at me like it is. I nearly beat a confession out of some scum bag yesterday. If Ari hadn’t stopped me, I’d probably be up on charges of brutality. I just wish I could do this one thing. That would make everything all right again.” He moved to her side, knelt down, and took her hand. “We’ll find some way to make this happen. I promise.” He kissed her hand, and stood. “I’ve got to go.”

Before she could respond, Mark walked briskly through the kitchen and out the door to the garage. She listened to the outside garage door opening and closing. Beth took a deep breath as she made up her mind to seek out the man that could possibly help give her husband what he so desperately wanted.

So there you have it. My version of March Madness. By the end of March, I should have a new book to promote, a business free and clear of any legal matters and all of my children of legal age. I'm sure after all of this, I'll be ready to move into April with happy dances and songs. 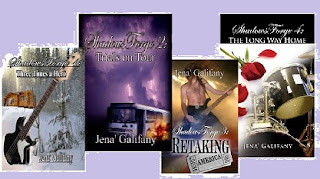 Miss the 80s or missed the 80s? Jump on the tour bus with ShadowsForge. They'd love to show what it's like to be on the road, rocking the U.S. and dealing with wine, women, and song. Meet the band HERE.

Join me on FACEBOOK.
Posted by JenaGalifany at 12:00 AM

thanks for sharing your creative process with Day Labor. I'm looking forward to reading it.

Loved your story of inspiration for this book. It's a good lesson in taking the time to look around you and imagining "what if."

Thank you both for your kind words. You inspire me as well.