We're very pleased to have Jennifer Wilck as our guest today. I know you'll enjoy her post. And oh my gosh...she's giving away a book. Read on for your chance to win. 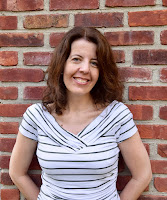 Writing Learning to Love was fun for me, because I had the chance to play around with my characters a bit, especially my heroine, Dina. The hero, Adam, appears as a walk-on, in the previous two books (although that’s the only connection to the rest of the series, so the book is easily read as a standalone) and he’s perfect. Gorgeous, rich and successful. Of course, he isn’t really perfect, but the way he presents himself to the world makes people think he is.

Therefore, my heroine had to be significantly less than perfect in order for her to be at all interesting. I gave her frizzy hair—I’m pretty sure I was having another terrible hair day at the time, so it was easy to take out all my frustrations on her. I made her brilliant, in the not-fitting-in-with-your-peers way. And I made her awkward.

She shows her awkwardness by spouting random facts any time she’s in a situation where she’s unsure of herself, like when Adam is about to kiss her, or she meets his dad, or...well, you get the idea and I don’t want to give away too many spoilers. In fact, I based her a little bit on the character of Dr. Spencer Reid from the TV show Criminal Minds. In his case, his random knowledge about obscure topics often help to solve their murder cases, or at least point them in the right direction.

One of the most fun things I did during the drafting of this book was researching obscure facts for Dina to spout. I looked up whiskey, baseball and even old-fashioned words for “idiot.” The first few times she rattles something off, Adam is taken aback. Soon, he learns to recognize them as a clue to her discomfort. And eventually, they become endearing.

So tell me, are you a trivia fan? Do you know obscure details or fascinating facts about something no one else does? Or have you researched something and learned more than you ever thought possible about it? Do you always win Trivial Pursuit (do people even play that anymore or am I dating myself)? Tell me something in the comments below and one random winner will receive an e-copy of the first book in this series, Addicted to Love. Can’t wait to hear from you!

Blurb:
Dina Jacobs is a single librarian who has never fit in due to her off-the-charts intelligence, frizzy hair and rounder-than-socially-acceptable figure. She left her past behind until she receives an invitation to her ten-year high school reunion, and all her insecurities return.
Adam Mandel is a single corporate attorney who just missed his third deadline at his father's law firm, the law firm where he is up for junior partner. With his reputation on the line, Adam needs all the help he can get to convince his father that he deserves the promotion.
When Dina and Adam run into each other on a deserted road, Dina thinks Mr. Flashypants can't possibly be interested in someone like her. Adam thinks Dina is just the person to help him improve his reputation. Lies and insecurities force them to take a look at themselves. Can they trust each other to look beyond the surface?

Dina swallowed and peered out the window, half expecting a line of servants to stand outside in greeting. This is where his father lived, and all she worried about was her hair?
Parking in front of the broad stone steps leading to an elaborately carved double door, Adam hopped out of the car and came around to Dina’s side.
“Ready?” he asked as he led her up the stairs.
“Sure.” Fake it ’til you make it, baby.
He rang the bell and as the musical chimes echoed inside, Dina turned to him in puzzlement. “Wouldn’t it be easier to walk in?” Before Adam could answer, an older woman in black dress slacks and a white cotton blouse answered the door.
“Mr. Mandel. Your father is in the living room.”
Dina walked with Adam behind the woman, her feet sinking into the Aubusson carpet, and resisted the urge to reach for his hand. She could do this.
Outside the doorway of the living room, he reached for hers. His warm skin against hers and the press of his fingers reassured her. Whether he needed the support, or whether he did it for show, didn’t matter. They were together for the moment.
His father rose as they entered, Adam gave her hand a last squeeze, and walked to his father. They nodded to each other, and his father turned his attention to her.
She held out her hand and he grasped it. While Adam might be Mr. Flashypants, his father was The General, complete with military posture.
“It’s a pleasure to see you again, Mr. Mandel. You have an impressive home.”
He released her grasp and nodded. “You’re quite different from Adam’s usual dates.”
Oof. Adam inhaled, and from the glint in his father’s eye, Dina wondered if he looked for a reaction. Her first impression of him hadn’t been great, and he sure wasn’t helping his cause now. But she was here for Adam, and she’d live up to her side of the bargain.
“I’m sure I am,” she said, a wide grin on her face. Looping her arm through Adam’s, she looked at him, hoping his father could read her expression of adoration.
“May I offer you a drink?” The General asked.
When she nodded and Adam’s father reached for the whiskey decanter, Dina blurted, “Did you know if you laid the 99 million cases of Scotch exported each year end-to-end, they would run the distance between Edinburgh and New York six times?”
Dina froze as the words left her mouth, for the expressions on the men’s faces were...odd. The General’s hand froze in midair above her tumbler, his mouth slightly open, his white brows furrowed. Adam looked between her and his father, nostrils trembling.
“No, I did not know. How...interesting,” The General said. “Adam, would you like one?”
He nodded, eyes sparkling.
They sat in front of the white marble fireplace, glasses in hand and Dina listened to The General and Adam make small talk. Or attempt to. They were really bad at it. The General mentioned the weather and Adam answered with a word or two. Dina launched into a description of cloud formations. Adam mentioned baseball and The General nodded. As the awkward exchange became unbearable and Dina was about to break in with baseball stats, the woman who’d opened the front door for them entered the room after a soft knock.
“Dinner is served.”
The General nodded, reminding Dina of an emperor surveying his subjects. He led them out of the living room, across the expansive foyer and into the dining room. If Adam didn’t hold her hand, she would stop dead in the entryway.
Buy Links:

My husband has a fly-paper mind for trivia, but my research gives me some weird stuff, too. There have been five big ice ages in Earth's 4.5-billion-year lifespan and scientists say we're due for another one in about 80,000 years.

Your book sounds delightful, Jennifer. I like reading books about awkwardness...since we are often less than skilled when life throws us curves. Happy sales to you!

Thanks for having me today, ladies!

Hi Rolynn. I didn't know we'd had so many Ice Ages! And another one in 80,000 years? Hmm, guess I won't worry about that one too much. :) Thanks for visiting and for your comment about my book. I really enjoyed writing it--awkward characters are refreshing to write.

Thanks for visiting us today, Jennifer. I seem to know enough random facts to do okay at answering Jeopardy questions, but not enough to spout them. LOL Good luck with your latest book!

Welcome, Jennifer. It seems I tend to be a lot like Jannine. Most of the random facts I know turn up in my mind at odd times, hardly ever when I can actually use them. Hmmm. Maybe I'm a little like Dina too. Loved your excerpt. Best of luck with your latest release. Wishing you many, many sales.

Thanks, Jannine! My husband knows a lot more than I do, but I confess I had to research the ones I used.

Thanks so much, Margo! She was a lot of fun to write! And I learned things, too. :)

Really enjoyed the post, Jennifer. At one time, I was fair with Broadway musical trivial, but that was long ago. Best of luck with the book, which sounds delightful!

Great post! I love trivia. I'm pretty good at it, unless it's sports questions...then my hubby's the one with all the answers. Bets of luck with your release.

Welcome, Jennifer! Your story sounds fantastic! I love characters that have odd little quirks. When it comes to trivia, my brain can barely retain what I'm doing from one day to the next much less keep extraneous facts! :-)

Thanks, Barbara. I love Broadway music, but would be terrible with its trivia!

Hi CB, thanks for stopping by. I used to hate the sports trivia section of Trivial Pursuit!

Thank you, Leah (my daughter has the same name)! I have less trouble remembering the unimportant things than the important things, which is really annoying. :)

Thanks to everyone for visiting! My winner is Rolynn Anderson. Congratulations!