A Halloween Treat #2 by Christine DePetrillo

I hope you've still been good, people. If you have, Halloween treat #2 is Abra Cadaver, a paranormal romance novella.

Blurb:
Holly Brimmer never expected to be brought back from the dead. After a fatal car crash, a mysterious stranger gives her a second chance at life—but it comes with a price. To stay alive she must pay it forward, accomplish an important deed, thus making her mark in the world. Until she does, her savior is bound to her. Now she has a backyard full of dead bodies and one unwanted houseguest.Keane Malson kills bad guys to keep the innocent alive, but he’s still a monster. Cursed by a witch moments before an honorable death on the battlefield, he’s lived thousands of years, roaming from place to place with no end in sight. It’s a lonely life…until he meets Holly.When a wanted man targets Holly, Keane will do anything to protect her, even if it’s the last thing he ever does.

Excerpt:
Holly Brimmer stared at the dead body resting in the grass in her backyard. She knew it wasn’t truly human, but shit, it sure looked like a real person. This one was actually good-looking. His rusty brown hair was only slightly matted with dried, greenish blood.

Must not have put up too much of a struggle.

His skin wasn’t that post-life purplish color yet either. He still appeared fresh, as if he might pop open his eyes and say, “Just kidding! I’m not dead.”

But that wasn’t going to happen.

This fellow had definitely taken his last twirl on the carousel of life. She inhaled the summer-heated air and exhaled slowly. How did I end up here?

“I don’t know why you insist on burying them, Holly. Demons only last eighteen hours after death, and I like to burn the bodies before then anyway.”

The mere sound of his voice tensed every muscle in her already stress-beaten body. If she could take back one horrible decision, Keane Malson would be it.

Keane leaned on the threshold of the back porch door. If he stood up straight, his head nearly hit the top. For a man of his size, he moved like a butterfly—absolutely no sound whatsoever. The snake tattoo circling his left bicep twitched as he folded his arms across his chest. Holly loved snakes, but that one slithering in black ink across his pale flesh confused her. She wanted to stay away from it and inspect it more closely at the same time.

Stay away from it, Holly. Snakes bite and Keane probably does, too. 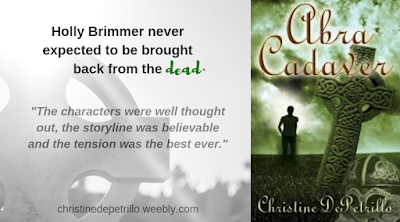 Pick up Abra Cadaver today and see how sexy monsters can be!

Whoa, your writing is so vivid! You're bound to do well with this one!

Love your title's play on words! Thanks for the excerpt...helps me see my problems are small...no piles of cadavers in my back yard, thank heavens :-)

Those were some pretty powerful word pictures. Nicely done.

Great excerpt, Chris! I love the description of Keane and the snake tattoo. And the very clever title. :-)

You have a definite way with words, Chris!

Your title is very clever. the excerpt is great. Best wishes, Chris.