A Halloween Treat #1 by Christine DePetrillo

You've been good, right? You deserve a treat, don't you?

Of course you do.

This month, I'm highlighting two of my more Halloween-appropriate stories. First up in this post is More Than Candy Corn, a Maple Leaf Series Halloween novella.

Blurb:
Sienna Faye makes her living designing toys for her father's Boston company, Faye Toys. Working for her father brings many pressures, some in the form of a video gaming heir he wants her to marry because it would be "good for business." Attending Super Con in St. Martin right before Halloween is just the escape she needs to hide and avoid telling her father she won't use marriage as a merger. The conference also gives her an excuse to have some fun in a fairy costume. Max Devon writes and illustrates graphic novels for his rabid teen readers. He loves his work, but every woman he's been with so far has trashed his career, telling him he'll never grow up if he always surrounds himself with superhero figurines and other nonsense. They just don't understand where inspiration comes from. Super Con is his chance to take a break from women or, if he takes his brother's advice, it could be a place to "just get laid," no strings attached. When Sienna stops at Max's booth at Super Con, the connection is instant. But if Sienna brings Max home, her father will flip. If Max lets Sienna into his heart, she could stomp all over it. Is a magical time in St. Martin enough to change everything for them both?

Mini-Excerpt:
“You and Christie are good friends, right?” Max asked.

“The best. Since kindergarten. But what made you conclude that?”

Sienna turned to face Max. He’d taken his hood off when they’d gone to meet Phil, and that chin-length blond hair gave him a rock star flavor that had her imagining things again.

“She said she liked me.” He made the statement as if that explained everything.

“So, that was her giving you the okay to like me.” Max stood and held a hand out to Sienna.

She took his hand and let him pull her to the dance floor. “I don’t need her okay to like you.”

Max drew her in close, one arm wrapping around her back, the other bent and holding her hand between their bodies. “Oh, so you do like me?” 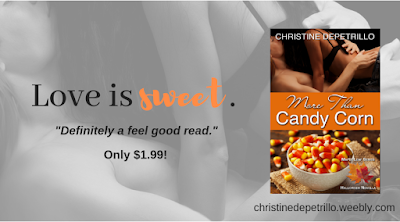 Pick up More Than Candy Corn for only $1.99 and enjoy a treat in the form of Max Devon, a new book boyfriend for you.

Fun excerpt and story concept, Chris. I'm imagining her fairy costume! And yes, you are putting me in the Halloween mood despite the fact that it's going to be 88 degrees where I live today. (Enough already! Even I'm ready for some cooler weather!) We don't get trick-or-treaters in my neighborhood for some reason (it's really strange), so I haven't had candy in the house in ages. But my favorite would be the malted milk balls. Yum.

What Leah said. LOL. It was a fun excerpt and story concept. Best of luck this spooky month.

They sound like an interesting pair! M&M's are the best!

Sounds like a fun one. And we share the same favorite. Can't beat chocolate and peanut butter!