I have two books going to audio. I’m not sure which will break first. This whole process is taking way longer than I thought it would. It seems to me, Sleeping with the Lights On will be my debut audio venture, so in preparation I’m sharing a couple of my character studies from the book. 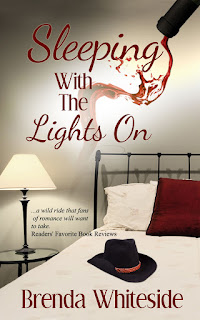 Every character in my stories have their own page of traits and information. The hero and heroine for Sleeping with the Lights On:

Heroine: Sandra Holiday
Age: 50
Description: Sandra is a green eyed, blonde. More than likely there's gray under that blonde, but we'll never know. Her hair still touches her shoulders in soft waves. At 5'3", she is petite and just slim enough. She prefers jeans, but wears form-fitting skirts to work.

Characteristics and Personality: Sandra hates to clean. She has a positive attitude in spite of feeling like she’s accomplished little in life. A die-hard romantic, she’s in love with love.

Background: Sandra was born in Phoenix, Arizona. She married young and it didn't last two years. Her marriage to her second husband, Carson Holiday, lasted five years. Why not longer? See Carson's background below. For the last eighteen years, Sandra has had some colorful relationships from a radio DJ that was too young for her to the Iranian who disappeared and was found dead in the Salt River. Her love of travel keeps pointing her toward careers in the field, but it seems every time she gets close, some man distracts her from her goal. As Sandra says, "Always a sucker for romance, but romance never lasts, and I'm left without a career."

Not in the book: She excelled in English class but didn't have much time for her other studies. Community College held her interest for as long as it took to get her Associates of Arts degree. One night, in Las Vegas Nevada, she met Carson Holiday who was performing on the casino stage at the Sam's Town Casino. He spotted her at the bar, playing video poker with a girlfriend on each side of her. She was twenty-seven. They were married three months later.

Additional Information: Sandra hates to clean. She still has clothes from high school. Beaujolais is her favorite wine, and Starbuck's is her favorite coffee. She has a sister named Abby who is taller, married, and her best friend.

Background: He was born and raised in Texas.

Not in the book: Carson attended college in Las Vegas, majoring in accounting. He was always a singer/songwriter/musician, but made sure he got an education for a backup. He chose Las Vegas for school because of the possibility of performing live in casinos. His father died when he was four. His mother raised him and his two brothers.

Characteristics and Personality: He has a voracious sexual appetite, but would never cheat on a wife or a girlfriend. When he feels he’s growing tired of a woman, he divorces her and marries another…at least that’s the old Carson!

I’m getting impatient for the release. I’ll be sure to shout it out on this blog when I know. In the meantime, you can get the print or eBook copy wherever great books are sold on line.

After two failed marriages and countless relationships, Sandra thinks she’s met the man to end her years of less than perfect choices; choices that not only derailed her travel-related career plans, but also left her single and broke.

When Carson reappears, Sandra must choose again. As life confronts her with yet another turning point, will her decisions find her eternally sleeping with the lights on – or will she finally discover a way to turn them off?

Email ThisBlogThis!Share to TwitterShare to FacebookShare to Pinterest
Labels: audio books, brenda whiteside, sleeping with the lights on, The Roses of Prose

Married six times?! Wow, Carson sure has a funny way of honoring his no-cheat philosophy! Sounds like a great character, Brenda. Keeping my fingers crossed for you that the audio will be out soon!

Love that you mentioned Sandra hates to clean twice. From your descriptions, they sound like the perfect pair. Best of luck on the audio releases, and everything else you have going on!

What great in-depth knowledge you have about your characters. I used to do this... Lately, I haven't taken the time, simply getting to know them as I go. Good luck with the audio when it comes out!

I highly recommend Brenda's book...and I said so in this review of SLEEPING WITH THE LIGHTS ON:
"The suspense in a relationship is confounding, and no one knows that better than Sandra, who thought her marriage to Carson, the musician, was the end all-be all of long-lasting loves. Nope. She’s fifty, single, with a new boyfriend, but unhappy in her career, when Carson strolls back into her life many years after their break-up. His motives are unclear; but their attraction to each other is instantaneous. Brenda Whiteside develops complex characters caught up in dangerous, emotional circumstances…and the surprises keep on coming. You’ll enjoy the ride!"

Yes, Leah, and he's modeled after a real ex of my sister's.

Thanks, Margo. In the book, she hides her dirty coffee pot next to the over flowing trash can under the sink when Carson comes over. I know a few women who would do that.

I some times start a book with very little info on the characters, Jannine, but I find I have to stop early on and complete their profiles.

Rolynn, thank you so much! I remember that review.

I enjoyed reading your character analysis. I do kind of the same thing but use phrases instead of complete sentences. It helps me remember to have them react certain ways to different stimuli. I know I do. Some things I don't mind and others really push my buttons. Good luck with the audio version. This may also spark ebook sales, too.

I really enjoyed reading this book, and I hope lots of others will enjoy listening to it!

Vonnie, I cleaned this up for the blog. I use partial sentences and notes. And in fact, this being the first book, my later books are much more detailed.

Thanks, Alison, although after listening to it, I wish I could do an edit on it. First book and all...I was a newbie and the editor didn't really catch it all.

I've actually met someone who was married six times. And that's all I have to say....

Was it my ex-brother-in-law, Andi? LOL

Love to listen to audio books when driving long distances alone. I'm adding to my library now as I'm headed to Colorado next week. I wish your two books were already on the market :)

What an in-depth description of your character. I usually learn as I go. Sometimes I take the time to write out everything I know about her/him, esp. when I get stuck. I hope your audio books do well.