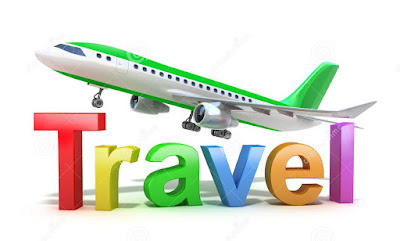 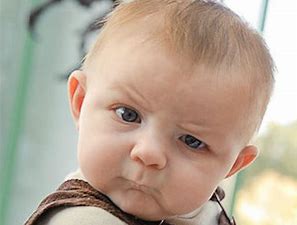 Then he had the nerve to say, "Mom, I want you in your hotel room by nightfall. And don't use the Metro. Terrorists like to bomb those things." 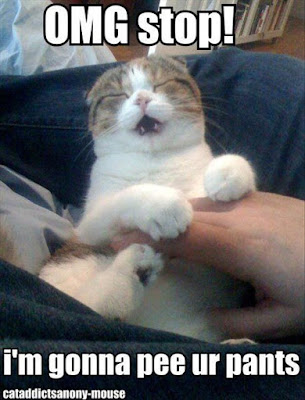 Since when, I ask you, should a woman listen to a man--even if he is her baby boy? Needless to say, I packed my bags and went. I showed him! Baby boy, or not! Why...the nerve I mean, really, would you listen to a thing this guy would tell you? 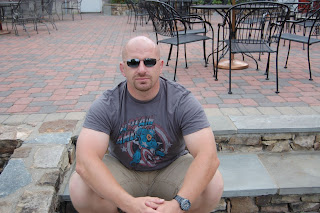 So, here's the view from my hotel room in Paris. My hotel was across the street from the Seine. 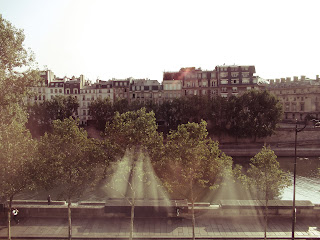 Sorry about the glare from my windows.

Notice the grey cast? That's how I saw Paris this time. I didn't have Calvin to hold my hand as I visited our old haunts. Instead I walked new streets and checked out new neighborhoods. I made my own memories. For example, I took a bus trip to Giverny where Monet painted his famous water lilies. The gardens there were fabulous. A sight I'll never forget. 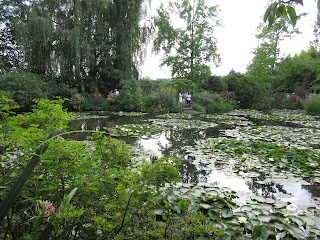 Monet's house was gorgeous inside and out. 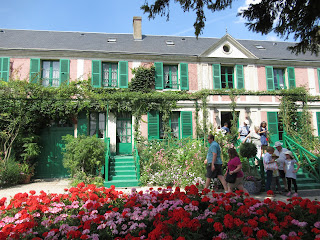 Kelly, Calvin's son, flew in from Berlin to join me for two days to be there when I spread some ashes in front of the building where Calvin and Kelly's Mom lived for a year. I couldn't do it. I broke down and Kelly ushered me up the street, telling me I didn't have to do it that day. "We can come back tomorrow," he said in a calming voice reminiscent of his father's. Instead, we went to Calvin's favorite writing café and had espressos. 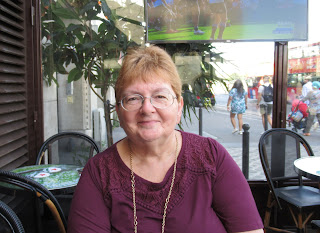 Notice my swollen eyes. That night I had a long talk with myself and actually looked at the ashes, something I should have done earlier...but...

The next morning we went out for breakfast and then walked to 21 rue Galande. This time I was able to fulfil my promise to my beloved. A part of him will remain in the City of Light he loved so much. When Kelly left to meet his flight, he hugged me and told me I'd be all right. I laughed through tears and said, "Kelly, I've never been right in my life. I wouldn't recognize myself if I were." He was laughing as he strode away.

A few days later and I was in Edinburgh where the ancient castle of Scotland sits atop an inactive volcano. Some hills and current streets are formed of hardened lava. I walked the Royal Mile from the castle to the parliament building. 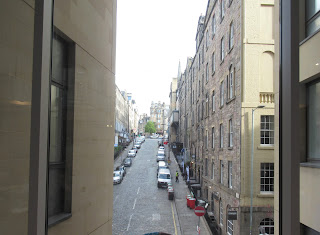 The view from my hotel room. The castle and the Royal Mile are on the hill. I took a bus tour to a whisky distillery, which makes the whisky preferred by Prince Charles. The Scottish spell whisky without the "e" and get a little pissy about those who mis-spell it with that "e" in it. I sampled aged whisky from ten to twenty-eight years old and doona recall much after that.

Another day I took a bus trip to see the Kelpies and the Highlands. Kelpies are mythical creatures that live in the lochs (lakes) and rivers as monsters and come ashore as beautiful horses with long, beguiling manes. When anyone tries to touch the manes, they are dragged into the water. Here I am, standing in front of two iron sculptures known simply as "The Kelpies." 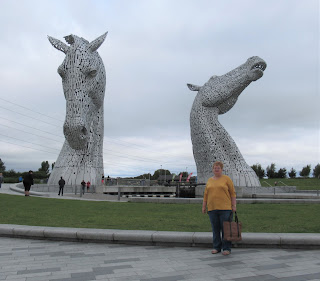 Our tour guide, Calum, in his kilt. He told us the Scots spelled his name with one "l" and the British with two--Callum. There's your trivia for the day. 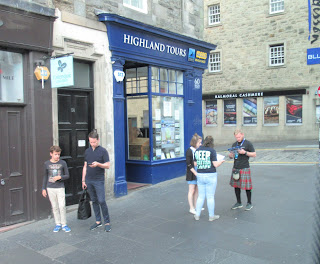 And the "hurry coos" that grow in the Highlands... or hairy cows in American-speak. 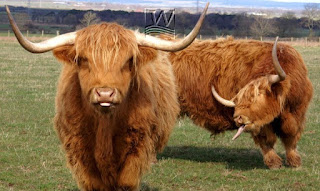 So this ole broad walked through  ancient streets and beautiful European cities alone. I didn't get lost. I wasn't mugged or hurt by terrorists. OK...ok, so I was in my hotel rooms by dark. But it didn't get dark until nine at night, so... And who needs to ride the metro when there are taxis and comfy sandals. I did come home with four handbags, but each one called my name...honest.

I admit to being happy I'm back home. Evie was over-joyed to see me and I missed my little Shih-Tzu. In many ways I had a lovely trip and in an important way a very lonely one. I wouldn't mind visiting Scotland again, going to the more northern part of the Highlands. The best part was garnering some story ideas. Travel tends to do that. New sights mean an increased curiosity and "what-if's..." for a writer's imagination.

Sounds like a bittersweetly (if that's a word) cathartic trip, lovely in many ways, and sad others. I'm glad you were able to fulfill that promise to Calvin. And I'm very, very glad that you made it home safely with some great memories and story ideas. Thanks for sharing with us.

Years ago, I decided it was time to take a trip alone. I never had. My destination was Paris. I wanted to walk the streets Toulouse had walked, drink where he drank, and see what he painted. I felt very big and brave and excited. My husband was okay with it. Then...we both lost our jobs. If the universe didn't want me to go, they could've sent a less stressful sign. LOL Never got back to it. So, I'm glad you did it, Vonnie!

Well, I for one, have been dying to hear about your trip, Vonnie, knowing it would be stellar. I am thrilled to hear the details of a very successful visit to Europe and a chance to stroll around Paris with Calvin one last time. I'm glad you got to Edinburgh, too...as author and tourist. What a grand city! Sounds like you returned to the U.S. refreshed...love hearing the energy in your 'voice.' Welcome home!

Oh Leah, it was a bittersweet trip. The first place I walked to was Place San Michel and across the busy street with more horns honking than a symphony to the place we always ate our first meal there. Saint Severn. I ordered Onion Soup just like we always did, adding a few salty tears.

Brenda, I think Calvin was pleased. I'll share a strange happening on my flight over. An older man was assigned the seat next to me and he talked before the plane took off from Newark (I'd flown from Lynchburg, VA to Charlotte, NC to Newark, NJ). He told me he was a retired teacher (like Calvin, I thought). He went on to say he'd taught English (so did Cal, what are the chances?). Living in NYC, he had an hour's commute to where he taught in Jersey (oh hell, Cal had an hour's commute, too). He told me he lived in Paris for a year (and I damn near went into hysterical freak-out mode). I couldn't speak more than "Oh?" as I held my champagne glass up for another refill (I'd been seated in first class by mistake...go figure). I was barely hanging on with all the "co-incidences" between my beloved and this strange man when the plane barreled down the runway. And he grabbed--GRABBED, mind you!!--my hand and said the exact words to me Calvin said every time we took off. "The two most dangerous times of any flight are the take-off and landing. We've got one down." I jerked my hand from his and nearly crawled out of my skin!!! I thought, "OK Calvin, if you sent this short white angel to me as one final joke, I don't think it's so funny." The man never introduced himself and I certainly didn't or couldn't. I was simply gobsmacked.

You really should try Paris. Maybe some day when the stars are in alignment you'll have that treat. Hugs..

I saw a lot of new sights, Rolynn. I had a good time, but I will confess to having a day in each city where I was too depressed to get out of bed. I'm so angry at myself for paying the money to go to those places and falling prey to grieving doldrums. But this is a process that will take its own course in its own time.

I, honestly, don’t consider you an “old lady,” Vonnie. I know how important this trip was to you, and I’m glad you now have more memories. Thanks for sharing your post and photos.

Once again you had me laughing then crying. In good ways both times. What a fabulous trip. Bittersweet, of course, but probably the only way to do it right. And, as has been said, I have a feeling Calvin would be proud of you. Plus, you made the trip and did the things as only you could do them. You’re right, this is a process for you. To do in a way that works for you. Thanks for sharing a beautiful journey.

What a memorable trip! Very good for you, I’m sure. I really enjoyed hearing about your adventures. Thanks for sharing.

Thanks, Angela. I had a lot of experiences. Met some lovely people on the day trips--a couple from Long Island, for example, and a playwright and her husband from Texas.

Margo, I didn't mean to make you cry...laugh, yes. You know me. Calvin always bought me an expensive leather handbag in Paris. So I kept the tradition up in a little handbag shop on the Isle of St. Louis while is next to the larger island in the center of Paris, housing the Notre Dame Cathedral. This little shop was maybe 12 X 12. The shop owner, Cherise, was passionate about her bags. I couldn't decide between 2, so she took a picture of me holding each one against me so I could get the total look. Heck, I've bought many a purse from Good Will, so this treatment always amuses me. When I told her I was a writer of hot and spicy romance, she sidled up closer. "Define hot and spicy for me, oui? French women love hot and spicy, I think." She ordered 3 of my books while I was there.

You're very welcome, Jannine. I love to share. In the airport in Charlotte, NC I spoke to a lady in a crowded area where everyone's plane seemed delayed. I told her I'd been through the same thing a couple years ago in this airport and it spawned the beginning of a book. She bought a copy of Mr. OH from her phone while we sat there...especially after I told her it was a shade erotic. "Like 50 shades?" No, I told her. Probably 29. We laughed and another lady asked what we'd found so damn funny about this awful 3-hour delay. She ended up buying a book, too. Thank you American Airlines. LOL

I'm sorry I'm a little late, Vonnie, but what a lovely post about a lovely, poignant trip. I loved your photos and shed a few tears for your loss. I hope you'll be able to go back to the highlands someday.

What a wonderful experience, Vonnie. I give you lots of credit for taking that trip. I hope that won't be your last one.

As usual, my friend, you made me laugh even as I teared up for the grief you worked through on that street in Cal's beloved Paris. I am so glad you went and I KNOW you charmed all who were fortunate to meet you. Love you, V.