Being a Thoughtful Writer by Leah St. James #amwriting

About eight years ago I attended the annual conference for New Jersey Romance Writers. Since the conference takes place across the water from Manhattan, it usually draws some big names in romance fiction, and I hit the jackpot that year.

I sat next to Brenda Novak at lunch where we shared concerns over having sons with Type 1 diabetes. I attended a round-table discussion for published authors facilitated by Suzanne Brockman where she talked about how she was handling the emergence of self-publishing. And I attended a workshop led by Eloisa James. (Talk about writing “fan girl” heaven.) I don’t know what happened to the copious notes I took from these and other sessions, but one thing Eloisa James said stuck in my head all these years.

Someone asked her about her writing routine—what a typical writing day looks like. She didn’t answer right away but finally said (paraphrasing) that she spends a lot of her writing time thinking. She got a laugh from the audience, but it made sense.

Creating fiction, or any piece of writing, takes time in thought before you can start actually writing. Then as you’re putting your story to words, you sometimes have to stop and adjust, maybe consider a different angle or research a point.

Writing takes a lot of thought, and that requires time.

I was reminded of that this week, Friday night actually, when I staggered home after a 12-hour day at the “paycheck job,” exhausted, discouraged and ready for more than bed. I was ready, in that moment, to sit down and tell  TPM (The Plot Master a/k/a hubby a/k/a my critique partner) that I was taking a break from writing until the day I could (hahahaha) leave full-time employment and maybe get a part-time job. 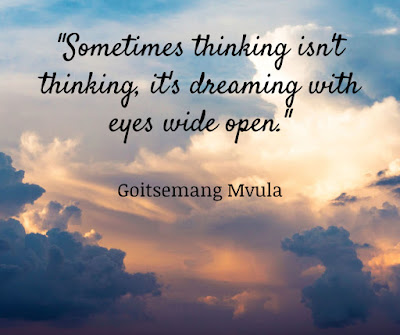 I didn’t say anything to him (other than “goodnight”!), and he got up first in the morning (meaning fed the cat and locked him out of the bedroom). Luckily I woke feeling a bit less fatalistic. Then we went to breakfast at our favorite diner-type breakfast spot, and the conversation turned to the plot of my current WIP. (You might recall that’s the one he ripped to shreds about a year ago, the one I’ve been struggling to get back on track.)

I told him about some changes I’ve made in his ideas, and we talked them out. We looked at different angles to the story, and I explained why I decided to make the changes. I had so much fun! When we left, I was re-energized and ready to tackle the project again.

I know I’ll get discouraged again. I’m sure I’ll have many more long days at work when I come home too tired to do more than fall into bed, days when I think about chucking it all. But I hope I can remember those words from Eloisa James. I hope I can slow down for a few minutes and think about why I started writing--to tell a story. I hope I can remember again how she inspired me. It might take me another five years to finish this blasted book, but as long as I keep at it, a little every day, someday I’ll get there.

Leah writes stories of mystery and romance, good and evil and the power of love—or at least she writes them in her head. Eventually they make it onto a book form. To learn more, go to LeahStJames.com.

Lots of times my husband is my plot master too! Though he won’t go as far as CP. Darn it. Dreaming with your eyes wide open. I like that! So true. Keep with it, you’ll get there!

It's a really fun thing to share, isn't it, Margo? We have the best times plotting together. He isn't a CP as far as writing craft/dynamics (proofing, sentence structure, etc.), but he'll read and say, "Something's not right in this scene. I don't know what it is, but it needs to be fixed." :-) Sort of like a gut check.

You are so lucky to have your "Plot Master" to bounce ideas off and will read your scenes. I can bounce ideas off Hubs. If/When he reads my stories, he'll give a sort of noncommittal response like "okay" or "interesting." LOL But then he doesn't read fiction. Hang in there. We all get down on ourselves or so exhausted that we just can't think creatively.

There's nothing like "talking book" with someone. My DH will do that with me also. However, he rarely makes plot suggestions, so your hubs is at a whole different level.

I don't plot with anyone...although I probably should. Once in a while, I'll whine to Margo when I get stuck. I do, however, spend a lot of "thinking about my plot" time while I'm walking the dog in the woods. Something about all that fresh air clears my head. You'll get there, Leah. Like you said, just keep plugging away!

I've known Eloisa James for years (we're both from Minnesota) and have been to several of her seminars. She's definitely a thinking woman's romance writer. I don't plot with OG--heaven knows what my books would look like then!-- but I do have a mystery-writer friend who's good with plot points. My current book was such a mess it's taken input from my editor (Jannine) and three beta readers to get it back on track. Sometimes, we need a little help from our friends.

Thanks for the pep talk, Diane. I am lucky...except when he disagrees with me! LOL! Truthfully, the only time we really disagree is when he thinks he knows the characters better than I do!

And Diane G., thanks for stopping by! We do have a lot of fun and used to spend dinner talking book when the kids were younger, before I even attempted to write. It's more fun when there's an actual book in the works!

You're obviously a better plotter than I am, Jannine. I usually write myself into a corner, or a tangle!

How cool that you know Eloisa James, Alison! I'm such a fan. And I think this current book is like your current book...it's taking a loooong time to shape up!

You are so right about thinking. Some times I've sat down at my computer and I've been surprised that the chapter I thought I wrote was just in my head. I take a nearly 3 hour drive every 2-3 weeks to see my mom. I get a lot of writing done on that trip. Thanks, Leah. And keep going.

I'm so glad to know I'm not alone! Yup, most of my books take place in my head before they ever hit the page--but it would still be nice to have a Plot Master.

Those long spans in the car make for great "writing" sessions, Brenda. One of my writing friends (and a work editor) actually writes while driving by dictating into her phone, using the speech-to-text feature. My brain-to-speech feature isn't quite developed enough for it to be worthwhile for me, I don't think, but then I've never tried. It's a thought! :-)

TPM is pretty handy to have around for story woes, Andi...and other "stuff" too. :-)