Whose Day is It Anyway? #SeniorMoments by Vonnie Davis

Either I'm not over the flu or I'm coming down with my third round of it. I sleep more than a newborn. And I dream the strangest stuff, which is normal as it ever gets for me. I crawled out of bed, did my morning beauty regimen--brushed my teeth and hair (different brush, folks), and washed my face. Calvin asked me why I was getting up so early--it was 11:15.

I unloaded the dishwasher and made coffee, thinking I'd get to read the Roses of Prose post before noon today. Well, there was none there. Whose day is it anyway? I know it's not mine. That's tomorrow on the third. My gaze traveled to the corner of my monitor. Oh my God, this is the 3rd, MY day!

I am literally sipping coffee and thinking what am I going to say? Ah...my newest novella releases on the 8th. In my last post, I shared the first chapter. I think I'll share the final scene of my paranormal, romantic suspense with you. KeeKee is Cameo's kitten. Tiny is Bowie's boxer and has a flatulence problem. Tiny, not Bowie. Oh gawd, hold on, I need another cup of coffee...

She was naked again.

Flying over the warm bay waters with her hair flying behind her. She entered a house. A man was on his knees holding back the crimson hair of a woman on the floor, hugging a commode.
She grabbed for a washcloth to wipe her mouth. “You hid my pills.”
“Dinna be silly, luv. We promised we’d talk about such things.”
If a cat could smile, KeeKee smiled at Tiny, who had the box of pills in the bottom of his toy box. KeeKee had knocked them off the vanity in the bathroom. Tiny had carried them and dug through all his toys to place them beneath a toy he’d had since he was a baby.
Animals rule 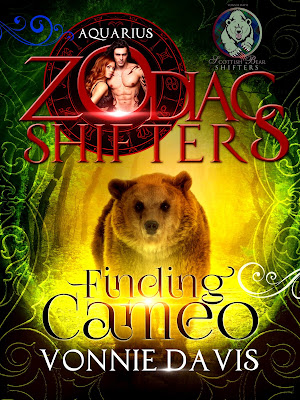 
Bowie Matheson, an Aquarian bear-shifter and police detective, is the first to believe Gemini Cameo Stone’s retelling of a dramatic dream. Cameo, a new lawyer in town, has the gift or curse of having prophetic dreams. Bowie, a humanitarian, looks to protect his community.
As soon as Bowie’s bear sees Cameo, he chooses her for his human half’s mate. Bowie is not impressed. He wants a mate with a sharp mind. Someone as beautiful as her couldn’t have both. But with the magical help of pink-haired witch, Effie, the sparks fly between Cameo and Bowie.
The compatibility between their signs cause them to grow closer since they often think alike. They are analytical, intelligent, and love the process of learning. Once these two get tangled with HSS, a gang that’s migrated from Glasgow, lives are in danger, fears reign, and the typically calm life of the area changes.


When Cameo is abducted by the murderous gang will Bowie’s intellectual connection with the woman he loves help him find Cameo?
Posted by Vonnie Davis at 12:08 PM

Hahaha! Love Keekee and Tiny!! I hope you're finally on the mend, Vonnie.

Your life is full of wonderful surprises, Vonnie...we love hearing about it (and think Calvin is one lucky guy). Keep laughing!

Never a dull moment from you...at least not for us!

Thanks, Alison. I see the doctor again this coming week. I'd been dreaming how I was going to explain my long absence to my employer when it hit me in my dream, hell, I'm retired and bumping into 70. I don't owe anyone an explanation. Well, maybe the readers of The Roses of Prose.

We do a lot of laughing at our house, either at the world's craziness or at ourselves. Unfortunately, there's less and less in this world to find humorous, Rolynn. I got a text from Ryan this morning. "Boy, is it ever windy up here, G-ma. I'm doing coding all day for the company I work for. Send hot soup." He writes code to hopefully prevent terrorists' attacks on the electrical grid and banks. He loves the problem solving of it.

Oh, Brenda, turn me around twice and I'm lost in my own world.

Vonnie, you can turn anything into humor. Love your cover and the premise.

It takes me days to figure out what to write, and you come up with something great in minutes! I'm in such awe.... Love the excerpt. :-) Sounds like a great story. (And feel better!)

Diane, someone once told me they'd love to be in my mind for an hour. I told her she couldn't take it, it's like a rollercoaster and merry-go-round combined. My mind moves at 90 mph, my feet shuffle at 4 mph. I just had an idea flash through my mind. My macho hero, who's quite the singer, offers against his will to sing a part in a children's musical. He has to wear a magical necklace...and a wig. At one point, he removes the magic necklace and sings goodbye to it before he give it to a little girl for whatever reason. The chain gets caught in his wig and pulls it off and not wanting to ruin the play sings to this mass of hair as he frantically pulls out a necklace. The audience is in hysterics. What makes me think of stuff like that? Now I'll have to write a story just so I can use that scene.

Thanks, Leah. I write like I talk only without the stutter. I love that Jannine used your name in her book. I smiled right away!

It's not your fault, Vonnie. It's February's fault 'cause it's so darn short! My day snuck up on me, too! Cute excerpt!

I love that Jannine used my name, too! And the hero has a cat!! :D

Jannine, that excuse sounds good to me. I was so sure I had a couple days yet before it was my turn.

I love putting animals and children in stories, they add a special depth.