A Weekend with the Authors and Elvis by Alicia Dean

(This has been written in spurts with spotty Internet, which I keep getting knocked off of, so forgive the wording, spelling, boringness, etc :))

I’ve had an exhausting few weeks.  First, my mother was hospitalized, then I came down with the flu, and now I’m on a trip where I attended an author event in Nashville (after a 12 hour drive). It was my first time at this event, and I had a fantastic time. I met up with some authors I hadn’t seen in a very long time and met face to face some of my author friends I’d only known online up to that point. Some of my ‘buddies’ who were in attendance:

My friend, Kathy L Wheeler, who moved to Seattle a year ago, and who I’ve only seen a few times since. I miss her and it was so great to see her.  Marie Tuhart, who I met years ago at a Wild Rose Press retreat, Darcy Flynn, who many of you know. She is so lovely and fun. I’ve edited for Darcy and she has referred others to me, with whom I’ve developed a friendship and who were also in attendance; Jeanne Hardt, a wonderful author and friend, and Jennifer Gatlin.  The event, A Weekend with the Authors, was lots of fun and the coordinators worked hard to put together a fun, interactive event for authors and readers. The only downside was that it appeared to be attended by as many, or more, authors than readers. However, the readers I met there were awesome. They were loyal, voracious, enthusiastic readers. And, isn’t that the best kind? Other than making connections and meeting up with author friends, two of the highlights of the event were the ‘speed dating’ where readers sat down with authors to get to know us. Each reader had 3 minutes. It was really a great way for readers to get a sampling of what we write and who we are. Another fun thing was the charms. Each author had the opportunity to order charms representative of their brand. (I chose a skull, is anyone shocked? 😊) At the event, readers collected charms from each of the authors and put them on a charm bracelet. We authors ended up collecting from each other as well, and I have a nice little keepsake from the event. This pic is a group of us who had dinner at The Cascades restaurant at The Opryland Hotel in Nashville. Left to Right: Jennifer Gatlin, Kathy L Wheeler, Alicia Dean, Jeanne Hardt, Darcy Flynn, and Krysta Scott. 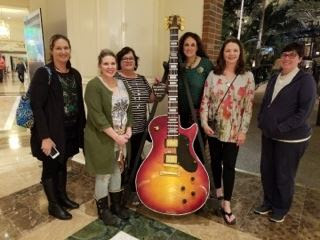 My friend, Krysta Scott, and I drove to Nashville together. On the way, we were passing over the highway bridge through Memphis and I had an epiphany. I suggested that, instead of staying in Nashville through Sunday night, we cancel our last night there and spend Sunday night in Memphis. She was all for it. She’s not a super fan like I am, but she does like Elvis and she’s never toured Graceland. So, the next morning, I got on the computer and, even though I figured the rooms were outrageous, I checked into staying at the new The Guesthouse at Graceland, a gorgeous new hotel right next to Graceland, that opened last October. To my surprise, the rooms were very reasonable. $151, which was slightly cheaper than the Airport Marriott where we were staying in Nashville. (The hotel was fantastic, btw, the staff was great, it was lovely an d wonderful). I booked a room for us in Memphis and bought Graceland tour tickets for Monday morning at 10 a.m.

We arrived at the hotel in Memphis and it by far exceeded both our expectations. It is GORGEOUS. The staff is friendly and helpful. The hotel has a theater where Elvis movies are shown, and we watched most of Viva Las Vegas on the big screen.

This nice lady from the U.K. took mine and Krysta's picture on the gorgeous grand staircase at The Guesthouse at Graceland: 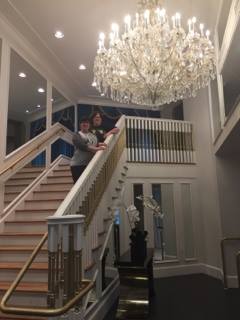 This is our TV in our room: 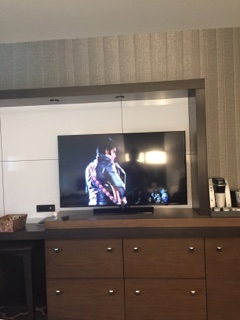 We met some adorable Tribute artists from Australia. Stuey V is an Elvis Tribute artist and JR is a Johnny Cash tribute artist. I recorded them saying hello to my son, Presley: (Doesn't look like the video went through, sorry ;))

So…not only does staying in Memphis allow us to break up our 12 hour drive into a 3 ½ hour and 8 ish hour drive, we have the added bonus of staying at this glorious hotel and touring Graceland. I’ve been here half a dozen times and I can never get enough. Krysta, as I mentioned, has never toured the mansion, and while she doesn’t think of herself as a ‘super fan’, she’s been getting a tad emotional and excited, suspiciously like a super fan might. I think I might be bringing her out of the closet…

Here's a fun fact, Disney is no longer the Happiest Place on Earth. :)

Sounds like you had a great time at the conference, Ally. I'm going to RT in May, and that will be my first time interacting with readers. I'm looking forward to it. I've been through Memphis once on a road trip but didn't see Graceland. I know...sacrilege!

Oh, Ally, you brought back great memories for me. My daughter and I did a 7 week road trip back in 2015 and both Nashville and Memphis were on our stops. I thought Graceland was going to be so hokey but, as you say, it's terrific--very well done. Glad you got your friend to go for the first time.

How fantastic. I've experienced those conferences where you're prepared to meet all kinds of new readers and it falls short. But you had a great time. And the Elvis adventure is one to die for!

Elvis? Oh, I am so there. I loved hearing about your trip. Sounds like so much fun. I'm glad you are over the flu. I had two rounds of it, topped off with strep throat.

Those kinds of road trips are the best. Sounds like yours was great. Hmmmm. Nashville is is sort of a half way point between Michigan and Oklahoma. Are they holding the conference next years? ***wink wink*** As you know, my husband, his sister and I hit Graceland this summer. Wonderful place. That hotel looks fabulous! Good idea you had.

How fun! So glad you got to spend some time with friends! I love the speed-dating idea for the event, too! I'm thinking of visiting Memphis, and that hotel does sound fabulous. Thanks for the tip!

What a great trip. Congrats on gambling on a Memphis/Graceland visit...you'll never forget those surprise adventures. Such fun to meet up with friends, too.

What a fantastic trip! Meeting up with friends added so much to the author event. It's great you got to go to Nashville and Graceland. Glad you're feeling better.

Wow, my week's been so insane, I didn't even make it back by to respond to your lovely comments.

Yes, Jannine, sacrilege for sure! I tell you, even people who aren't huge Elvis fans seem to enjoy Memphis. Maybe one day you'll make it there.

Awww, Andrea. Isn't it wonderful making memories with your children? I took mine to Graceland about three years ago and it was quite special. Yes, Graceland always seems to be better than people expect. :) Of course, for me, I expect it to be magnificent and perfect...and it is. LOL

Brenda, yes, there weren't a ton of readers there, but the ones we met were awesome, and yeah, the Graceland trip was the coup de gras (or however you spell it, LOL)

Vonnie...you would have loved it, and we would have loved hanging out with you! Oh my....you've had it rough. You know, my throat is still very sore. I wonder if I'm not over it or getting strep. :(

Leah, yes, the speed dating thing was great. And, the hotel, wow, it's just indescribable. I want to live there! :D If you visit Memphis, let me know!! It's only 7 hours from me and I would do my best to come see you there. (For you, not for Elvis, promise! ;))

Yes, Rolynn and Diana, road trips and meeting up with friends is a blast. And Graceland was a fabulous way to end the trip!!