And you think you have problems? ~ by Leah St. James


I live about three hours southeast of D.C., in an area that is home to a number of our nation’s historically significant sites, including Jamestowne and the site where the first African slaves stepped on “American” soil, not to mention the U.S. Army base that took in fleeing slaves during the Civil War (by cleverly declaring them to be “contraband,” but hey, it worked).

We’re also home to Langley Air Force Base and Naval Station Norfolk (largest naval base in the world)...oh, and the CIA’s top-secret training facility at Camp Peary known as “The Farm”....or so legend says. (Even typing that probably bumped me up someone’s watch list!)

The major private industry in town builds nuclear aircraft carriers, and down the road a bit are a bunch of rocket scientists who work at NASA Langley (“descendant” of NACA, the organization featured in “Hidden Figures”). We’re also home to The College of William and Mary, one of the country’s oldest and most respected institutions of higher learning.

So...yeah...there is no shortage of really, really smart people where I live, or of those who are committed to protecting our country and to making it better for all of us. I come in contact with many on a daily basis, both in my neighborhood and at work.

In my “day job,” I work for a news organization that covers our local community with daily and weekly publications in print and online (a/k/a “the newspaper”). I have the privilege of answering the newsroom “tip” line, our publisher’s direct line and the “feedback “ line. Our readers are not shy in sharing their opinions about what’s going on in our community, the nation or the world. (My brain is still bleeding from listening to reader commentary, from both sides, during the presidential debates.)

So earlier this week as the nation prepared to swear in a new president, and our journalists prepared to cover both the local inauguration story and the women’s march in D.C., I was prepared for an earful. And I got it.

The calls started before I got in on Thursday—lighting up my voicemail’s message light. I dropped my purse under my desk, booted up my laptop and got to work. And the news was worse than I had thought.

Our residents were mad as H-E-double-hockey-sticks! Catastrophe had happened. The end of the world was near. American was doomed; the last nail had just been hammered into the coffin of the most traditional of news media--the newspaper.

It seems our production team had inadvertently published the wrong day’s puzzle/comics page.

Yep, it’s true. We printed Friday’s puzzle page on Thursday. So if you were looking for the answers to Wednesday’s crossword puzzle...sorry, Charlie. If you were hoping to read the next panel of your favorite serial comic...too bad. We had screwed up...bigly.

One 80-something-year-old retired general told me, “My wife goes bat-**** crazy when she doesn’t get those crossword answers!”

And that was mild...I took one snarky/PO’d/threatening call after another.

And it did. On Friday we published both the missing Thursday pages and the (now correct) Friday pages, and once our readers figured out where to get their answers, things calmed down.

So what’s the moral of this story?

If something is making you anxious or upset today, maybe, just maybe, it will help to tell yourself: This too shall pass.

As a completely unrelated bonus, hoping to elicit a few smiles, I've added a funny video of my son’s 9-month-old cat Hercules. (Please click on the link to see the video; I am NOT a rocket scientist and don't appear to have the technological smarts to embed it.) :-) 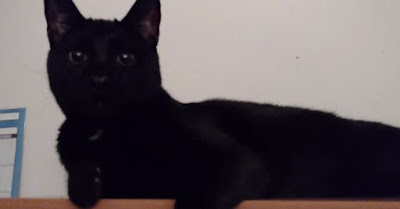 Leah writes stories of mystery and romance, good and evil and the power of love. She routinely escapes the reality of our world by immersing herself in romance novels, where she can always find an HEA.

Visit me at leahstjames.com or on my Facebook page.
Posted by Leah St. James at 12:05 AM

Too funny! Although I've never been known to go bat*** crazy over such an issue, I sure can relate. Glad the incident finally passed for you.

Thanks, Margo. It was rough going there for a couple days, really rough. :-)

Funny, Leah. Hubs loves the crossword puzzles and the comics, but I can't see him going bat-- crazy over an error, and our newspaper has made a few. You certainly live in an interesting area. Love the video. My mother's psycho cat was like that. Peaceful one second, vicious the next. I like your advice, and I'm trying to heed it--this too shall pass.

Thanks so much for giving me a big smile to start the day in what for me has been an incredibly depressing eeek ----oh. I meant week!

Glad sharing my woes helped to bring a smile, Diane and Andi! It really does help to keep a sense of humor throughout the day when you work with the public. Newspaper readers have no mercy at times for even the slightest mistakes. Sigh.

And yes, Diane, Hercules has a bit of a Jekyll/Hyde personality. I hope he might outgrow the Hyde part as he matures!

Leah, I would go bat**** crazy with your job! Glad you can laugh about it. In this tumultuous, troubled world, when it gets right down to it, in the words of one of my favorite singer/songwriters "it's the little things...that piss me off."

I would add an observation: in troubled times when the complexity if human issues abound, something tangible like a crossword puzzle, a daily ritual, is the only solid thing around. I don't do crosswords, but I've noticed people who do them regularly, shut out the world and work 'em.

Leah you live in a wonderful place. My two brothers live in the D.C. area, and I never tire of visiting them, because there's so much exploring to do!

You're so right, Brenda. It's like, even THIS can't go right?

Good point, Rolynn. Completing that daily ritual must send a signal to the mind that all is well...or at least normal. My husband and I do love our area. We moved here from NJ about 10 years ago, and although it was a bit of a culture shock (moving from north to south), we haven't regretted it!

You should have told all those whiners that if they were any good at crossword puzzles, they wouldn't need the answer key! Hilarious! Thanks for making me laugh.

I loved this! And the cat video. We're still trying to reach calm from this past week. Calvin's having minor heart surgery in a few weeks and we just found that out. So, hearing that folks went a little bonkers over crossword puzzles makes me smile.

Vonnie, I hope you and Calvin reach calm quickly. I'll be thinking of you both over the next few weeks! I'm glad you got a smile. :-)

I have a friend who was a reporter for a small town Southern (Georgia) newspaper. I remember her tales of what constituted news -- some of which became the germs of ideas for a book or two. Your crisis sounds like some she told us about!

I can't imagine the level of patience it would require to deal with the public on that level. I do know, however, that OG made me write a letter to the editor of the Monterey Herald to complain when the dropped his favorite comic without explanation and substituted a far inferior one. And I wasn't the only one. They published three letters with the same complaint on the same day! Not a word in response to any of us. LOL

JL, for a while I was writing a blog with "Overheard in the Newsroom" as the topic, and there was some pretty "wild" stuff. Like the time the woman stopped in our lobby with an oddly shaped yam and wanted to speak to a reporter because she thought it would be a news item. (It wasn't.) :-)

Alison--I'd bet that the staff at the Montery Herald got many more complaints than the three they printed. There's a saying in the industry, something along the lines that you can do anything to the newspaper, but don't touch the comics! We switched out some about a year ago and received dozens and dozens of complaints. (My eye is twitching now just remembering!) We aren't able to respond personally to every call or letter either either, but we do our best to address broad concerns...like the comics. :-)

Hahaha, wow, the things that some people get upset about. Sounds like the citizens of Pawnee! (I'm rewatching Parks and Recreation, so...) LOL. thanks for the laugh!