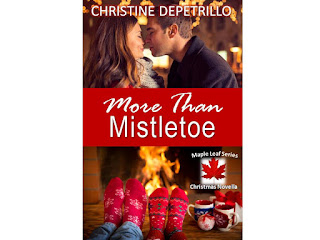 This tale is part of my Maple Leaf Series!
Chapter Two

Alex paced in his room at Hinsdale Inn. His lips still buzzed from Dayna’s kiss.

No. That’s not true.

He’d had time to stop it, but he hadn’t wanted to stop it. How long had he dreamed of kissing Dayna? Like forever. Those nights when she’d needed a place to hide from her father had been awful for her, but not for him. He’d loved the way she made his room smell—peaches and sunshine—and talking in the dark for hours with her had always relaxed him. He’d tried being best friends with the boys in his classes, but they always fell short. So immature. Dayna made him think and laugh and dream.

And now he knew what her lips felt like pressed against his. That kiss had been better than anything he’d ever imagined.

So why did I run?

Because he was a coward. Dayna was the best friend he’d ever had. If he lost her… if a different kind of relationship didn’t work between them and they couldn’t see each other anymore, he wouldn’t be able to deal with that.

Although… nothing about that kiss suggested they wouldn’t be amazing together. It was as if her lips had been made to fit his. For the few moments before his stupid brain took over, everything had been perfect. Her lip gloss tasted like cinnamon toast. Her long, black hair had slipped like silk between his fingers as he’d slid his hand up to the back of her slender neck. She still smelled like peaches and sunshine even though it was the end of December. The small noises that came from her throat as they kissed nearly set him on fire.

The look in her deep blue eyes, however, when he’d torn his lips from hers and bolted to his feet told him she’d never forgive him for running away. How could she? She’d taken a chance—a big chance—and he’d thrown it back at her. He’d even slammed the door on his way out. Not on purpose, but he’d had to get out of there. Had to tamp down his arousal before things got out of control. Get his head back on straight.

He wasn’t supposed to be kissing Dayna Birchfield. Best friends didn’t kiss. They hung out. They laughed. They busted each other’s balls. They didn’t fall in love.

Crap. This was too much for him to think about. Wasn’t he supposed to be not working hard on this mini-vacation? Kissing Dayna was more complicated than any engineering problems he tackled at work.

He raked his hands through his hair then caught a glimpse of himself in the mirror hanging on the wall above the dresser. Black strands stood out like spikes and he had a wild look in his hazel eyes. If someone handed him an ax to go with his flannel shirt, he’d look like a serial killer right now, lumberjack style.

Alex went to the bathroom adjacent to his room and smoothed down his hair. After a few splashes of cold water to his face and donning his ski jacket, he left the inn, intending to take a long walk in the icy air and figure out some things.

When he got to the frozen pond on the property, he found Mark and Erin snuggling on a bench, steaming mugs of hot cocoa in their gloved hands. Now there was a couple who knew how to follow the rules. They’d met in college. Dated for a few years. Mark proposed. Erin said yes. They were well into their happily ever after. Like completely normal people.

He sighed. Loudly apparently because Mark and Erin turned around at the same time to look at him.

“I don’t know.” Alex jammed his hands into his jacket pockets. “How would I know how she is?”

“Uhh, because you were getting her settled in her room.” Mark raised his blond brows then turned so he could see Alex more fully. “Dude, what’s wrong with you? You look like you’ve seen a ghost or something.”

Erin grinned as she sniffed in the steam from her mug. “I think he’s seen something all right. What took you so long?”

“I don’t know what you mean.” Alex started walking again, prepared to get lost and freeze to death in the woods instead of have Erin give voice to what was cycling around in his head. How did she know anyway? Some kind of womanly insight? Damn her.

“You keep telling yourself that, Alex,” Erin called.

“Telling himself what?” Mark looked from his wife to his brother. When neither of them replied, Mark frowned. “I’m missing something.”

Erin patted her husband’s cheek. “Men miss a lot of things, sweets. Fortunately women are a forgiving sort.” She dropped a quick peck on Mark’s cheek then stared up at Alex. “If forgiveness is asked for in a timely fashion that is.” She motioned back to the inn with her mug.

Dammit. He wasn’t ready to go back in there. To face Dayna. To deal with the kiss.

But Erin was right. The longer he went without doing something, the more likely he was to lose Dayna forever. That couldn’t happen.

With a growl, Alex turned around and stomped back toward the inn, Erin’s call of good boy floating on the chilly breeze behind him.

He marched through the inn’s great room where Lily and Rick were huddled on the couch. Did this inn pump something into the air to make folks want to get romantic? Jeez.

“Can we get you anything, Alex?” Lily tugged on a fleece blanket Rick was apparently hogging.

Balls. Some balls would be good. Because going upstairs to see Dayna was making his palms drip with sweat. His heart was doing this weird dub-lub dub-a-de-dub dub-lub in his chest. His mouth was wicked dry too. Maybe he was a little dizzy.

Oh, God. He was going to die before he told Dayna how he really felt about her.

“Alex?” Rick surrendered the blanket to Lily and stood to face him. “What’s wrong? Did you see a bear out there?” He squinted out the great room windows.

“A bear?” Lily crunched up into a ball on the couch.

“No. No bears.” Just one nosey sister-in-law who happened to always be right. “I’m just going to check on Dayna.”

“Let us know if she needs anything.” Lily had uncoiled and offered some blanket to Rick who readily accepted it as he sat on the couch again. The two of them were back to cuddling before Alex hit the stairs.

He stared up the stairs. Dayna’s closed door was to the right. She was just on the other side of it. Was she sleeping? Should he maybe not disturb her?

Should he stop stalling?

Did she want to cuddle?

Why was he being such a damn baby about this? Had Dayna’s kiss scrambled his brain entirely?

But he could do this. He had to.

He knocked on the door, the sound echoing in the tranquility of the inn. Vermont was so quiet. Too quiet. Alex was used to Boston noise. Comforting city noise. This silence made his wild heartbeat thunder in his ears.

Crap. She had been sleeping. Now he felt like a jerk again, but it was too late to turn back now.
He opened the door and stepped into the room. Sunlit ice crystals on one of the large windows mesmerized him for a moment, but a sniffle from the bed immediately garnered all his attention.

“Dayna?” He moved closer to the bed. “Are you crying?”

Dumb question. Of course she was. Her beautiful eyes were slightly bloodshot and her cute nose was red.

She cleared her throat and sniffed again. “No.”

“Liar.” He sat on the edge of the bed near her feet, doing a quick scan of her ankle. “Are you in pain?”

A choked laugh filled the space between them. “You could say that.”

“Do you want me to get you something to drink or eat?” He swallowed loudly. Damn that quiet.

“Because you can’t wait to run out of this room again?” Her blue fire gaze threatened to fry his retinas. Dayna didn’t usually do dripping with disdain, but right now? Heck, right now she was nailing it.

“Look, about that…” He scrubbed a hand down his face and looked at his boots.

“Let me guess,” she said. “That kiss was a mistake and we’re best friends and best friends aren’t supposed to make out under the mistletoe, which if I could stand up right now, I’d rip that freaking weed down and burn it.” She huffed out a breath and shifted, a wince flitting across her features as she jostled her ankle.

“You’re a terrible guesser.” He risked scooching up to where her knees were, his arms itching to hold her maybe.

“I am?” She licked her lips and he couldn’t help but stare at them now that he knew what they could do to him.

“I don’t think that kiss was a mistake,” he whispered.

“Then why did you run?” Dayna folded her arms across her chest as if she thought he was full of crap.

“Y chromosome?” He dared to slide up to her thighs now, moving as if he were approaching a butterfly he didn’t want to fly away from him. “I panicked. I was enjoying that kiss too much. I couldn’t—”

Her hand on his stopped him. “You enjoyed the kiss?”

“Very much. Who wouldn’t, Dayna?” He flipped his hand over so he could thread his fingers between hers. “You know how I’m always telling you’re good at things?”

She nodded, her gaze focused on their clasped hands now.

“Add kissing to that list.” He reached out his free hand and tipped her head up with a finger to her chin.

Her cheeks were a beautiful shade of pink as she looked at him. “Are we still best friends?”

Alex stood, his hand slipping from hers. “Definitely not.”


Tune in tomorrow for the final segment, Chapter Three!

What a sweet story, Chris. A friendship like this, especially given such a harrowing past for Dyna, is a precious thing. Alex is a gem!

"Definitely not!" Great line! Seems as if Alex has figured it out. See you tomorrow!

Love the part with the brother and sister-in-law, and that last line is perfect! Looking forward to the rest!

I always go back to my favorite movie, When Harry Met Sally, and Harry's line about men and women can't be friends...

Sweet story and some great dialogue!

Such a sweet story. Can't wait to read what happens next.

Go, Alex. Suck it up and jump in with both lips! Great job, Chris.

Awwwww, love it! Alex wised up. :) I love the dashes of humor. Well done!