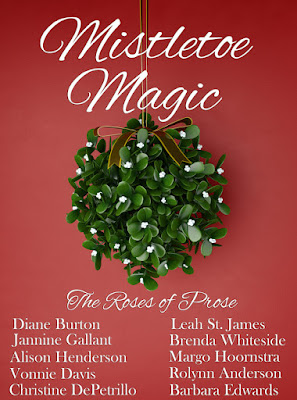 
Kenzie recognized the voice and glanced up. Framed in the garland trimmed doorway, Derrick smiled as he walked toward her, plastic cups filled with bright red liquid held out in each hand.


“I brought you some punch, mildly spiked. You can’t begin to celebrate the Christmas season without at least one glass under your belt.”


She accepted the cup he offered then had to smile at his kindness. “That’s very sweet. Thank you.”


“Call it a tradition.” Setting his drink down on a table beside the swing, he reached in his pants pocket and pulled out something wrapped in a red napkin he handed over. “I brought these too. You get first choice.”


She set her glass beside his to unfold the paper on the two iced sugar cookies then handed him the one in a snowman shape covered with white frosting.


“Frosted stars with sprinkles are my favorite.” She took a small bite of one corner. “Are these cookies a tradition down here, too?”


“I don’t know about that.” The swing swayed as he picked up his cup and sat beside her. “It’s our tradition now.” He smiled, and once again the dimple in his right cheek emerged full force. “Among others we’ve created.”


She suspected he referenced the kiss they’d shared upon her arrival, along with the mutual knowledge of how thorough and complete a kiss it was. The evidence was right there in those eyes of his as they stared deeply into hers.


“Traditions can be nice.” She picked up the punch she brought to her lips.


This close, details she’d never noticed when he pushed his package laden cart into her office to set her portion of the day’s mail on one corner of her desk were crystal clear. The movie star resemblance being one of them, along with a definite sparkle in his deep blue eyes.


With some effort she kept her gaze from dipping back to those firm lips and cleared her throat. “This is a far cry from the piles of snow and freezing temperatures I’m used to.”


“For better? Or worse?” The words, along with a tantalizingly warm breath, grazed over her left ear, the super sensitive one.


She turned toward him at his question then took her time to answer.


Derrick Winters bit the head off Frosty then took a fortifying swallow of his punch. So far, so good. She wasn’t ranting at him. Yet. There was no screaming bloody murder as she ordered him to leave and never speak to her again. However, he did refrain from swiping a hand over his brow.


“That remains to be seen.” She lowered her gaze from his to concentrate on finishing her star.


“Fair enough.” Derrick let out a short sigh, and then took to polishing his cookie off too. He wasn’t totally out of the woods yet. The decision to snatch the kiss when she first walked in had been a spur of the moment thing. Sheer madness really. Though once into it, he did maintain the presence of mind to put forth his best effort.


Call him a true traditionalist. As far back as he could remember he’d always been a sucker for long, blond hair and big blue eyes. After all, he was only human. Except being around Kenzie, he couldn’t shake the impression he was in the presence of a goddess.


“I feel a little out of my element around here.” She dusted a crumb from the corner of her mouth.


“This nice weather is a culture shock for someone used to howling winds and driving sleet.”


“There can be pluses to sunshine and warm breezes.”


She watched him for a long, slow moment before she spoke. “You could be right. It beats navigating through snow clogged streets and walking on slushy sidewalks.”


Those bright blue eyes studied his with an intensity that made him blink, but he refused to look away. If only he could come up with a clever comeback.


“A toast to a prosperous year behind us and even more successful new year ahead.” The male voice rose over the music and conversations going on inside to burst into their silence.  “And fellow employees here at our firm to share in the good fortune.”


Kenzie glanced up. “Sounds like Mr. Simms is speaking. That is one of the reasons we’re here, isn’t it?”


“Maybe why he’s here. I propose a toast, too, but not necessarily to what he said. How about we toast traditions?”


“Okay.” She lifted her glass to touch his. “To traditions.”


Eyes on each other, they took small sips.


Laughter from the party mingled with the lyrics of Have a Holly Jolly Christmas and Kenzie turned her attention toward the solitary opened window to listen.


At the faraway look that shadowed her eyes, Derrick had no choice but to do the same.


‘Have a jolly holly Christmas.’


“Those instructions to enjoy ourselves with friends and family sound pretty definitive.” Corny as it was, he started to bob and sway to the music.


Offering a grin, she moved with him to the lively rhythm. “Then I guess we’d better comply.”


Doing a silly-ass dance, while sitting down at that, Derrick didn’t feel the least bit foolish. The beautiful woman beside him had a lot to do with it. More amazing though, for the first time in a long time, the shield he’d built up to protect his busted up heart wasn’t nearly as stiff and rigid as it had been.


When Kenzie started to sing the words to the Burl Ives classic, he couldn’t help but catch her enthusiasm and join in. Keeping his gaze locked with hers, savoring the good feelings he got from her smile, Derrick sang with all his heart.


As the cheery singer mentioned someone under the Mistletoe awaiting a kiss, he couldn’t help but smile. Yes sir! I certainly will kiss her, more than once, for you.


The song ended and their voices drifted away.


“We’re pretty darned good.” He made the assessment as they exchanged cheerful gazes.


“We are that. Except I don’t think either one of us should quit our day jobs just yet.” Her eyes actually lit up and his heart swelled.


“You don’t?” He dead panned the response. “In your opinion we don’t have the slightest shot at stardom?”


“Sorry, but no. We are good, but not that good.” She tossed her head back and thick, golden waves swung around her face as she laughed out loud.


At the light, happy sound that rose into the night he had to join her then couldn’t help it when his gaze zeroed in on her mouth. On the lips he’d captured on a whim a short while ago, and longed to taste again. Restraining himself, he pulled in a breath. Not just yet. For their immediate future, he was content to learn more about her. The woman he noticed the first day she arrived.
The breathlessly beautiful woman with the sad eyes and seeming inability to smile. 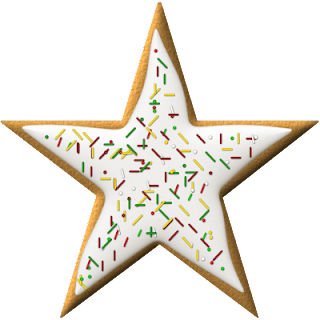 Please join me again tomorrow here at The Roses of Prose, for Part Three of A Sing-ular Tradition.

For more about me and my other stories, please visit my WEBSITE

I think I'm in love with Derrick! So adorable. Makes me want to hang up some mistletoe and see what happens...

Aw, thanks, Chris. From both me and Derrick. Good luck with your mistletoe hanging. Keep us posted!

I love him already. I hope Kenzie realizes how special he is.

Nice to hear, Diane. He does his best to show her.

Ah, the mystery in the backstory. Clearly Kenzie deserves some sun in her life; will she accept the fact? Staying tuned.

Yep, Rolynn. Backstory revealed. My fellow authors taught me well. Backstory does not need to all be revealed in the first paragraph. See you here tomorrow!

Okay, I confess to reading this at 12:02 this morning. But I was too tired to leave a coherent comment, plus Calvin was turning out the lights. I could picture them on the swing, singing and swaying side by side (alliteration, don'cha love it?). Awesome job.

Waiting to see what happens next. He sounds so nice.

Thanks, Barb. I tried to go for sweetness with him. ;-)

Awww, what a hero! Love him!! I'm not sorry I'm late, because now I don't have to wait for Part 3! Great story, Margo.