Love in the Vault Part Two by Brenda Whiteside 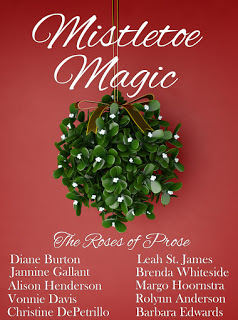 Eleanor gasped. Harold wasn’t looking for a quiet corner to pick up where they’d left off under the mistletoe. He wanted access to the vault.
A vision of being locked away in the mammoth safe for the weekend, no water, no food, and no bathroom, brought renewed trembling to her knees. Pretending to stumble was easy as she lurched forward and grabbed at a handle on the last cabinet. With her other hand, she clutched the edge of the metal drawers and whirled to face him, putting the corner of the cabinet between them. He wouldn’t just take the money and let her go. She’d be locked up until Mr. Cline came for the funds to make Monday’s deposit.
Unfortunately, Harold was right about one thing. She did always go home alone. Who would notice she’d left the party?
“Please, please reconsider what you’re doing.”
“What do you think I’m doing, Eleanor with the sweet ass?” Pulling her away from the filing cabinet, he drew her close.
“Money.” She gulped. His grasp wasn’t exactly rough, more like the hunk taking possession of the bare-chested beauty on the cover of an old-fashioned romance novel. She always did find those covers revolting. “You’re…you are after the money, right?”
“Mmmm…yes, that’s what I’m after, but, maybe you’d like to share in the wealth. I’ve seen you looking at me—with less than pure thoughts.” His deep blue eyes were partially veiled by thick lashes. The effect, meant to be purely sensual, sent shivers of another variety.
Her neck burned hot while her mouth went dry.
“I could be your Santa, baby. Put a little something in your stockings? Actually, it would be anything but little.”
“Oh,” she gasped, sure her face now glowed with heat.
His laugh rumbled deep. “Joking, Eleanor. Although, under better circumstances I wouldn’t mind finding out how your sweet ass looks in a string bikini, you’re not a likely companion for an escape to a faraway beach somewhere with a suitcase full of stolen goods.”
“You’re not the least bit funny.” She tried for bravado, but was met with a smirk.
He released her, reached between the last two filing cabinets, and brought out a canvas bag the size of a small suitcase.
“It won’t work. Two people are required to enter the code.” Maybe he didn’t know she could open the vault alone. “Let me go, and I’ll forget this ever happened.”
“Any combination of you, Roman, and Cline right?” His sneer erased her hope for an out. “But there’s one bewitching hour a day when any one of you can unlock the door. You give me about as much credit as our asshole boss.” The gun jabbed hard, forcing her to turn and take the last few steps to the vault. “Okay, let’s get this business concluded. The magic hour is ticking away, and I have a plane waiting.”
“Is a few thousand really worth the risk? You could go to prison for a very long time.”
“A few thousand?” The smirk on his face meant he knew more about the accounting than she hoped.
“Yes, you know most customers don’t deal in cash.” She continued her bluff, holding a glimmer of hope that he had only a vague idea of what the vault could hold in the company’s busiest month of the year.
“Nice try, babe. I’m guessing you don’t know the half of it.” He leaned his face close to her ear. “Fun and games are over. Open it. Now.” His growl sent shivers down her spine.
She had no idea what he meant, but the time had come to quit stalling. With a shaky hand, she tapped the code into the digital lock. The click, signaling the release, punched the quiet, stuffy air.
Harold pulled Eleanor inside the vault. “Have a seat, sweet ass.” He nudged her onto the L-shaped, leather bench to her right.
She collapsed into the corner, facing toward the far wall.
“I think you’re going to enjoy the show. My guess is you haven’t spent much time in Cline’s safe.”
“You have?”
“Not physically. Although, I was privy to the original general outline for the company.” He set the canvas on the table in the center of the room, unbuckled the leather straps, and unzipped the bag. “Cline and I go way back. To college. He knew he’d take over the business from his father and run it differently than old dad. I was with him from the beginning. Then he got greedy. He decided he needed another man to be his second—someone who didn’t know as much about his roots.”
Roman, Jack Roman.
He withdrew two lengths of rope from the bag.
“Oh.” Tied up. Left in the vault. Oh god, she’d die. “Please, Harold. I won’t move. You don’t need to tie me up.”
“Put your hands behind your back.”
“Harold—”
He stuck the gun in her face. “I’m really serious here. If you’re lucky I won’t kill you, but how would you like a bullet somewhere that would incapacitate you. I can’t have you getting a sudden brave urge to stop me.” He brought his face close to hers. “I see a little hint of rebellion in those pretty hazel eyes of yours.”
Her heart hammered, and she swallowed deep. Wordlessly, she turned on the bench, hands behind her back.

Join me tomorrow for Part Three.

Harold the Creep is really starting to tick me off now! I had to laugh about her concern over being locked in over the weekend - no food, water or bathroom! That last one would have been my first thought! Great part two, Brenda. I knew I should have waited until all three were posted before starting to read! :-)

What Leah said about the bathroom. ;-) Great minds abound around here! Can't wait to find out what makes Harold tick. Excellent work, Brenda! I'm loving this!

Thanks, Margo and Leah.

Hmm. The plot thickens. Eleanor's definitely been in the dark. Let's see if she can call up her numbers game and save the day!

Harold is a creep. Can't wait for him to get his!

Mean...mean...triple mean to stop the story right there. My heart pounding and everything. And I agree with the others. FINALLY an author adds what most women of a certain age would think...where's the bathroom? LOL

Am I the only one who thought, "Locked up in a vault for the weekend? At least I'll have some peace and quiet." I know I'd figure out a way to make a mega-writing weekend out of the solitude! LOL.

You all are hilarious. And shoot, Vonnie, I've always thought about the bathroom at any age. LOL

I think we all thought the same thing about the bathroom. LOL This story is getting downright scary. I sure hope this isn't all a big joke on Harold's part.