When a Writer Has Nothing to Say by Vonnie Davis

I'm writing this on Super Tuesday. So politics are on my mind. I don't appreciate others shoving their political views down my throat. In like manner, I'm not shoving mine down anyone else's. We're all smart enough to make up our own minds.  'Nuff said there. 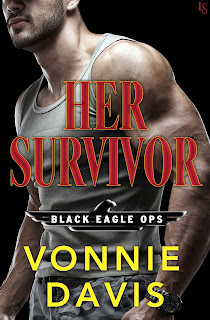 My cover for Her Survivor is finally up on Amazon. It's book one of my "Black Eagle Ops" series and releases in July. I was so tickled to see my hero make his splash on the empty listing, it took me a few seconds to realize there was another coverless listing. For book two--Hers to Heal. The one I'm still writing! Panic set in and my fingers have been furiously kissing the keyboard ever since. I wrote slightly over 2000 words today. Maybe I'll get a few hundred more written before bedtime. I thought of part of a scene while I was supposed to be taking my pre-dinner nap. Yes, this old bird has reverted to some behaviors from childhood, like naptimes.
But I don't want to talk about the "A" word.

As soon as I finish this post, I'm critiquing ten pages for an author friend who has a novella she wants to submit. I think I edit more than critique. I worry the overall theme is a little dark, but I'm not in the mood to talk about that either. 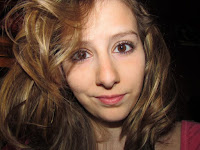 What would I like to talk about? Weddings! My oldest granddaughter's wedding is June eleventh, two weeks after she graduates from college with a double major in Psychology and Criminal Justice. Odd, really. It was just a few years ago I helped deliver Eleni. The doctor was running late and little Eleni Elizabeth--five weeks premature--couldn't wait to get here to boss her two big brothers around. The nurse ordered me to put on a pair of latex gloves and I did. What an experience! My Sugar Dumplin' weighed in at five pounds. An hour later, I stood at the nursery window watching the pediatrician and nurses hovering over Eleni's incubator. Not that I'm nosy, mind you, but I slipped in to hear what was going on with my grandbaby. She wasn't breathing right and they were discussing whether to airlift her to a larger hospital. "I'll be riding along," I said nonchalantly. The pediatrician whipped around and asked me who I was. "I'm the grandma. I go where she goes." I pointed to the incubator while the nervy doctor pointed to the nursery door. I stared; she glared. The nurses suited me up and allowed me to touch Eleni and talk to her. Before long her breathing regulated. I took credit, of course, much to the irked doctor's annoyance. I sent Sugar Dumplin' a check for her wedding gown and veil. All I asked was that she not tell me one thing about it, so I can't even talk about that. Sigh. See, I want to be blown away when I see her ready to walk down the aisle (Investment tip: Buy stock in Puffs tissues!). 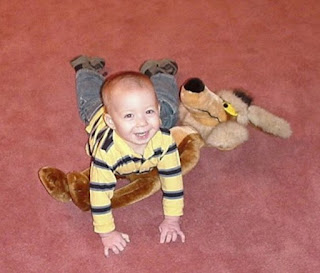 My grandson, Ryan, qualified for States in wrestling. The tournament is this coming weekend. He's on my mind, too. Ryan is a goal-setter. At the end of every summer vacation, he sets goals for the coming school year. This year, they were to get all A's, be admitted to MIT, and win a medal at States. He's an over-achiever, yet a gentle kid with a quirky sense of humor. I wouldn't want to say he was raised to be a wrestler, but here he is shortly before his second birthday pinning Wile E. Coyote. Last year he got a B in Honors English and called me, heartbroken. I told him I was glad. He paused. "Why?" I told him I was glad he'd missed his anticipated A and had to face he wasn't perfect. "We're all human, Ry-man (okay, so I'm a nickname freak, it's a sickness, I tell you). We don't always reach the goals we set. The secret is to never give up, to keep trying." His one and only B didn't hurt his admission to MIT. All I wish for him this coming weekend is that he win at least one match. Okay, maybe two, but I won't talk about that. Grandmas can be SO boring.
Next time I blog, I hope I have something to say. Follow me on Twitter on @VonnieWrites. Tell me, what do you have to say today. It has to be more interesting than my rambling.

Vonnie, somehow you manage to turn "nothing" into entertaining and fun. Congratulations on all your news. How cool it must have been to help deliver your granddaughter! That's not a story many of us can tell. And good luck with the not-yet-written book! I know you'll pull it off, with humor and a great story in the end.

Nothing to say? Vonnie, dear, you said plenty. Nothing better, or more entertaining, than talking about the grandkids. Best of luck with the latest series. Entertain away!

Oh, it was thrilling, Leah. I was the first one to touch her. Thanks for the well wishes on the book.

Thanks, Margo. Grandmas could talk about their grandkids for hours, ad nauseum. We have the uncanny ability of thinking they're the best, no matter what.

A very entertaining post, Vonnie. It is good for these overachieving kids to learn they aren't perfect and that life doesn't always go their way. A needed life lesson.

So true, Jannine. He's so hard on himself. I blame this on his real mother leaving him when he was 14 months old. Children blame themselves when a parent moves on. He needs to cut himself some slack.

I'm trying to wait my turn and not be jealous. I LOVE hearing about your amazing grandchildren and all their accomplishments. Maybe some day...

I don't have grandchildren to gush about, but I LOVE hearing about my friends' grandbabies. Really, I do. And I'm not jealous either. Really, I'm not. :) You have a great deal to be proud of. Wow, both of those kids sound like exceptional people. What wonderful memories you have. And, as a few others remarked, to not have anything to say, your post was quite entertaining. Best of luck on the WIP. (Off to purchase stocks in Puffs tissue....)

Vonnie, you always make me smile when you talk about the grandkids. Of course, Ryan is a favorite of mine because of the wrestling (I would have said the same thing to him about the B...for sure!), but this incubation drama was over the top. You have to put that in a book! You're so funny about 'not having anything to say.' How is it that when you have nothing to say, whatever you do say sounds better than anything I could contribute. Mush on, my friend!

Your enthusiasm for your grandchildren always makes me smile. What a proud grandma! Keep on sharing those lovely stories.

Alison, when your day comes you will adore every yawn, every movement, every accomplishment that baby makes...even if he/she is 22.

Thanks, Alicia, the WIP is coming along. I'm feeling better about it. As for grandkids, the pressures of being a parent are gone. It's not up to you to teach them everything...just the fun stuff. Oh, and of course the stuff that will pluck the parent's last nerve. Not...not that I would ever...

Thanks, Rolynn. States start this afternoon and I sent Ry-man a text with grandma advice, ending with 'win or lose, g-ma loves you cause you is da best.' He replied, "Ha-ha. U make me laugh and I love you to the moon and bk.' As for the newborn nursery scene, it was tense. The doc learned quickly there was nothing more hard headed than a worried grandma.

Thanks, Diane. I do love them a lot, as you can tell.

Fun post, Vonnie. I have one 3 year old granddaughter and she's all I will ever have. Cherish her. And totally understand your pride and love.