“To succeed you constantly have to reinvent yourself. Try different things.” Bob Mayer, last week on Elizabeth Meyette’s blog. 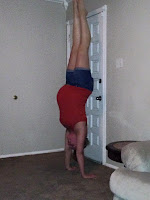 My 7-months pregnant daughter-in-law, who with her friends, remember their gymnastics coach by doing handstands on the anniversary of his passing. Is that flexibility or what?
One thing you learn early on in married life—especially with children—is being flexible. Life throws us curves, or as Brenda Whiteside wrote here last Thursday, “Make a Plan and Hear God Laugh.”

Another thing we learn as we get older is that our bodies become less flexible. I was never as flexible as my daughter-in-law, even in my younger days. My physical therapist tells me that for relief from chronic back pain and to gain the ability to walk longer, straighter, etc., my hips have to be more flexible. That they're too tight, too rigid. Thank God, he wasn’t talking about my mind.

When I first started writing, I wrote romances, like the Harlequins I’d devoured ages ago. That didn’t work. Rejections abounded. Then I tried romantic suspense. Suspense always came up in my romance stories anyway. I wrote this great story, but nobody wanted it. For fun, I wrote a story about a woman who was kidnapped by aliens, by mistake. I was surprised when Switched was picked up by a small niche publisher back in 2000. Alas, my publisher didn’t like the second book. She thought my heroine should be pushed out an airlock into space. I disagreed.

Time went by, life threw some curve balls, I dropped out of the writing game for a while. That’s when everything changed. Social media? What’s that? Facebook was what my brother-in-law used to show off the fish he caught. Blogs, Twitter, Triberr, LinkedIn, Pinterest. My head spun. The multitude of publishers became the Big Five. Or is it now the Big Four? If I wanted back in the writing game, I had to readjust my thinking. I had to learn new things, new ways of doing things.

A friend suggested since I had the rights back for Switched, I should self-publish it. After all, it wasn't doing anything anyway. Talk about being surprised. Wow. I wrote more science fiction romances and people bought them. Double wow! Then I took a chance with that romantic suspense and The Wild Rose Press wanted One Red Shoe. Our own Alicia Dean was my editor. I couldn’t have asked for a more enthusiastic editor for my book. While I haven’t published any more romantic suspense, I have some hiding in my computer that need to be hauled out and looked at.

I love writing sci-fi romances. But I wanted to try something else. A mystery series with a female detective. A PI who takes over her father’s business in a small resort town. The Alex O’Hara series was born.

Without being flexible, I wouldn’t have tried the different genres. If that’s reinventing myself, I’m having a blast doing it.

Diane Burton writes sci-fi romances, romantic suspense, and cozy mysteries. She blogs here on the 30th of the month and on her own blog every Monday.

Wow, your daughter-in-law is crazy flexible! Very sweet tribute. I know what you mean about reinventing. I'm always trying something new. I am so glad you got back in the writing game, or we never would have met. And I was absolutely thrilled to be your editor for One Red Shoe. Love your P.I. books too, and oddly, I even love your sci-fi, although that's not my genre. Who would have thought? :)

Have to say, Diane, you've been an inspiration to me since that first pre station you made on Romacing the Stone. Just wish I could keep up better with your extensive flexibility.

Good for you. Life is much more fun when we try new things.

I think in this business, you have to become flexible or perish. I keep trying different things. Small press, self-publishing, digital branch of large press, agent, no agent, novels, novellas, stand alone books, series, historicals, contemporaries, suspense... With each maneuver, I've learned and grown as an author. And overall, sales are on the rise, so I guess I'm doing something right. Stay limber, my friend!

I've tried multiple genres and multiple publishing formats over the years, and I plan to keep evolving. Not only is it necessary, but it's half the fun!(BTW, if you find a remedy for tight hips, let me know. I get stiffer every day.)

I have characters patiently and not so patiently pacing back and forth in my brain for his or her chance to share a story. One is a WWII pilot in his leather bomber jacket, silently smoking which might be why my one retina bleeds. I have an American jazz musician in Paris during the Lost Generation. There are a few shifters, but I can't tell if they're bears or panthers. They're in hiding, but I sense their presence. I like political intrigue and a President's daughter is in my head, tied up, waiting for her hero to come capture her...when she finds out her own dad is behind it all, well... So, yeah, we have to be flexible. I doubt any publisher will want these stories since they aren't that marketable. But I'll get to them one day. Flexible or not. Great post!

First, your daughter-in-law....wow. I could never pull that move off even UN-pregnant! Good for her. (I wonder if your grandbaby-to-be will be a gymnast!) :-)

You're so right about being flexible. It's keeps us young(er), in body and spirit! I love learning new things and technologies. That doesn't mean I'll stick with them all, but I want to at least learn. As far as remaining physically limber? That's a bit tougher when your knees are sounding like a bowl of Rice Krispies with every step, but it's worth the effort. :-)

I'm so glad you stuck with it.

Alicia, thanks. You are a great example of trying new things, too! I don't read much vampire stories yet I've loved yours. DIL has stayed flexible all her life. I give her a lot of credit for that.

Thanks so much, Margo. You've been going thru a lot lately. Give yourself time.

Loralee, I really appreciate your praise. You are my inspiration, too.

I agree, Brenda. So much more fun.

Thanks, Jannine. I wish my body was as limber as my mind. LOL

Alison, tight hips made me laugh. It is more fun to try new things.

Good for you, Vonnie. I love your attitude. We have readers waiting for our stories--even if a pub thinks they won't sell.

Leah, that's Baby Girl in that picture, too. Apparently, her mom doing handstands didn't bother her a bit. It will be interesting to see if she is a gymnast, too. My "young" mind doesn't listen to my older body. LOL I've heard those Rice Krispies.

I've been out of town, Diane. Loved seeing your checkered past...roller coaster ride, just like I saw in Santa Cruz today. I think this ride makes us more resilient...ride on!

This was an interesting post. It's interesting to reflect on all the ways we have to be flexible, especially in our writing. And that pic of your daughter in law is too cool!

Thanks, Rolynn. A checkered past is right. LOL So is the roller coaster.

Hi, Jessica. Thanks for stopping by. I guess we'd get stagnant if we weren't flexible.

Wow, you've really excelled at being flexible. I could do fantasy, sci fi, and maybe romantic suspense. But mysteries? Forget it. I don't have the head for those. I like to read them, though.

I am in awe of your daughter-in-law's flexibility — first in her ability to do a handstand and then to do it while pregnant. Amazing.

Lori, I can't do fantasy. Enjoy reading the books, though. We write what we love best. Yes, DIL is flexible. She's also a loving mother to Baby Girl. From what I've seen, BG will grow up to be like her mother.