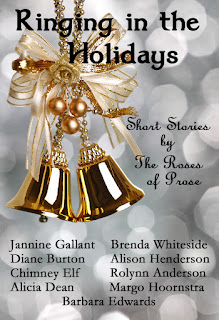 
“Well, now. Is everyone here?” Santa, aka Judge DeVran, asked. “Lawyers? Since this is such an important case?” His eyes twinkled beneath the white fur of his hat.
George stood. “Yes, sir. We’re all here. We don’t need lawyers.”
“Deputy, get those ridiculous handcuffs off those two. You know better.” As soon as the cuff were removed, Judge Santa said, “Now what is this all about?”
Dawson drew himself up. “Florence Ten Eyck and George Watson are accused of trespassing and theft. Here’s the evidence.” He held up the large bag then spilled the contents onto the table in front of the judge.
“Tell me, Deputy. Are those five loaves of bread?”
“Yes, sir. From the dumpster at Randolph’s bakery.”
“Florence and George, why were you taking bread from the dumpster? The Far Haven Mission feeds those in need.”
“The bread isn’t for us,” George said. “We feed the birds with it.”
Florence stood. “Danny, I mean Your Honor, sir. That stingy old Duncan Randolph wouldn’t give me the bread when I asked him. We feed it to the birds at Waterfront Park.”
“Deputy, you called me away from my important duties at the hospital for this?” He shoved up his fur cuff to look at his watch.
“Yes, sir. I—”
“If Santa is late for the children’s holiday party, it will be your fault, Deputy. Case dismissed.” Santa banged the gavel then stood.
“But, sir—”
“Deputy Dawson, do you understand the words ‘case dismissed’?” He banged the gavel again.
“But—”
“Speak again, boy—” Santa shook the gavel at him. “—and you’ll be the one spending Christmas in jail. Dismissed. Get out of here. All of you.”
George and Florence stood and hugged each other, Santa left the room, and Deputy Dawg walked down the aisle with his tail between his legs, and the handcuffs on his belt jangling like the bells on Santa’s sleigh.
Outside the courthouse, Florence hugged George again, Sam, and Bethany. Then she looked at Abby. “This was the most fun I’ve had in years. Don’t ruin it with a lecture.”
Abby thought of several things to say—none of them good. “It’s okay, Mom. Let’s go home.”
After hugging her daughter, Florence said, “George, you and Sam come for Christmas dinner tomorrow. Abby’s cooking at my house. Two o’clock and don’t be late.”
George grinned. “You’ve told me so much about Abby’s prowess in the kitchen, I can’t wait.”
After Sam and George left, Abby turned to her mother. “Why did you invite them? We hardly know them.”
“You’re going to have to get used to George being around. Besides, I don’t want those two bachelors eating Christmas dinner at Denny’s or some such place.”
As they got in the car, what her mother said registered. “What do you mean we have to get used to George being around?”
“I love him.”
“That’s really cool, Grandma. Are you going to marry him?”
“Maybe, maybe not. We haven’t figured that out yet.”
Abby drove in silence, barely taking in the conversation between her mother and her daughter. Mom was in love, or so she thought. Was that why Mom looked so happy? Was George the reason she’d changed so much? Abby should be happy for her. Instead, she felt numb and—dare she admit it—jealous.
The next afternoon brought more snow and two hungry men to the Ten Eyck house. Abby let her mother show them around while she stayed in the kitchen making sure nothing burned. Despite the vent fan roaring at top speed, the heat from the oven and stovetop made the small room hotter than August. She raised her forearm to wipe the sweat off her brow and to push her damp hair off her face.
“Would you like a towel?” Sam stood in the doorway under the mistletoe Bethany had hung last night.
“You startled me.” Abby wouldn’t admit she was happy to see him.
“You look very nice. All Christmas-y.” He wore a dark red shirt with a green Grinch tie.
She’d dressed up in her new red sweater with glitter thread woven through it and her black dress slacks instead of her usual reindeer sweatshirt and old jeans because she wanted to. It certainly wasn’t for him.
“I’m fine. Would you like a drink?” she offered.
“Got one. Actually, two.” He held out one glass. “Pop fixed this so it might be a little strong.”
She took a sip then gasped. “A little strong? Yikes.”
Sam chuckled. “I guess we’re going to be seeing each other often.”
“So I’ve heard.”
“You don’t sound too happy.” He gave her a wary look. “Don’t you like my father?”
“I never met him until last night. If Mother is in love with him, why hasn’t she introduced us?”
“Maybe she was afraid you wouldn’t approve. In fact, you and I haven’t been properly introduced.” He held out his hand. “Sam Watson.”
She wiped her hand on her apron before clasping his. “Abby Ten Eyck.”
His big hand engulfed hers, warm, reassuring, strong.
“It’s not that I disapprove,” she said. “And I want her to be happy . . .”
“You don’t know us,” he finished. Still holding her hand, he led her to the doorway. “If the folks do get married, that would make us brother and sister. Here’s to getting to know us better.” He glanced up at the mistletoe then kissed her. “Merry Christmas, Sis.”
That wasn’t a brotherly kiss.

I hope you enjoyed "The Christmas Jailbirds." For more stories that take place in the fictional town of Far Haven, Michigan, check out The Case of the Bygone Brother (An Alex O'Hara novel) and the latest Alex O'Hara mystery, The Case of the Fabulous Fiancé, available soon at online retailers.

Wishing you a Merry Christmas, Happy Hanukkah, or however you celebrate the holidays. See you in 2016.

Nice ending....sigh. Merry Christmas right back at you, Diane. Thanks for my very first present!

Fantastic story, Diane. I'm sorry I didn't get to stop by yesterday, but I got to read two parts this morning! Love these characters and your little town of Far Haven. (There's a "Fair" Haven in New Jersey, too, BTW.) I hope you're planning a bigger story for them!

Thanks, Margo, and you're welcome. :)

Thanks, Leah. I think Abby and Sam need a longer story. :) And, yes, I knew about Fair Haven, NJ. Google is wonderful.

So much fun. Thanks, Diane. You now have me in the Christmas spirit!

I'm sure that wasn't a "brotherly" kiss. I like Sam already. He sounds like a go-getter. Great ending to a great story. Thanks so much!

Brenda, Vonnie, & Jannine, thanks so much. Now I can sit back and relax while reading everyone else's stories.

Thanks, Diane. Merry Christmas to you too.

Wonderful almost end... you have to tell more about these two.. they deserve their own happily ever after!

Melissa, I agree. I want to know what happens next. :)

Lovely ending Diane. I was hoping that mistletoe came into play!

What a fun story, Diane, and I love Deputy Dawg. I also love your descriptions of their holiday attire. Now I have to see if I can find a Grinch tie for OG. LOL

Thanks, Rolynn. They say never mention a knife in chapter 1 unless you're going to use it in the last chapter.

Alison, Deputy Dawg is one of my fav characters from the Alex O'Hara stories. He is such a goofus. I'll bet OG will love that tie. :)

Awwww, loved it!! Sorry I was late reading the end. Busy couple of days. But, wow, fantastic story with a warm-fuzzies ending. Great job!