Then and Now by Betsy Ashton

Not long ago, I posted a #ThrowbackThursday picture on Facebook and Twitter of me in 1975. In a bikini. The fact that I was a size six and had dark hair wasn't the reason I posted it. It was the look on my face of wondering what the future held. True, I was already in my, well, not teens, but I had plans for my future. Looking back, some came true, some were unrealistic, and some were just not worth pursuing.

I vowed long before the picture was taken that I would survive whatever life threw at me. I'd already survived a lot, but I had more to go.

I vowed I would always have what my mother called "walkin' money." She taught me at a very early age to have money in my handbag or pocket for a phone call or a taxi. Why? Because I might not always end up where I wanted to be. If I could make a couple of calls, I'd have a strong chance of surviving. (Note to the younger readers: This was before we all had cell phone, before 911. We had pay phone. Everywhere.)

My mother also meant having enough money to leave a bad situation permanently if need be. Years later, Oprah would call it her "bag lady" money. Enough to start over if necessary. (See the discussion on "bag lady money" in Mad Max Unintended Consequences. Thanks, Mom and Oprah.)

By the time my then-boyfriend took this picture, I had finished college, collected four degrees, and had a good job in industry. I also had a savings account for that all-important "walkin' money." Over the years, I lost two jobs, one through downsizing, one because I was the wrong person for it. Each time, I dedicated myself to two things: finding another job and writing books.

I had no idea at the time of the bikini pic that I'd one day become a writer, but maybe that's part of the looking into the future and being excited about what was to come. I started writing really bad 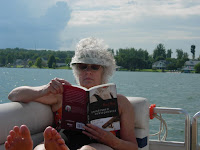 prose, but writing nonetheless, after my downsizing. That romance sits in cyberdust. Perhaps I'll look at it and determine if it's too bad to be rewritten. After I was fired, I wrote a three-book saga of a group of women. at 350,000 words (in six months), honesty says overwrote the saga. Again, maybe I blow off the cyberdust...

Anyway, between the bikini and now, I achieved a goal I hadn't foreseen. It was all a matter of numbers. One agent + one publisher = two books in a series in print. Giggle.

I didn't foreseen where I was going, but I'm glad I'm here.

Betsy Ashton is the author of Mad Max, Unintended Consequences, and Uncharted Territory, A Mad Max Mystery, which is now available in e-book at Amazon and Barnes and Noble.

Great picture, Betsy. When I think back on my youthful dreams, I realize many came true (husband, family, home) but some took me in different directions than anticipated. Hubs' job took us around the Midwest. Great adventures, new friends, opportunities, but no real sense of "home." In my teens & beyond, I never thought of writing as a career. Life takes us in strange directions.

Wow, Betsy, you were HOT! LOL Hmm, maybe we should all dig up old photos of ourselves in bikinis and use them for our profile pictures. We might sell more books! Right now, I'd like to see writing produce more than just "walking around" money for all of us. Hey, it could happen. That's a reasonable goal, right?

Love both of these pics, Betsy. Your mom (and Oprah) steered you well. I never thought of writing as a career, either...what a lovely surprise! Makes me think there are more cool surprises still ahead!

Great stuff, Betsy. The picture, the messages from your mom, the fulfilled and not to be fulfilled but that's okay dreams. Best of luck with the newest release! I'd never heard of that publisher before. Thanks for sharing that too.

You all had such good comments. I have been a bit under the weather this week, so I wasn't able to comment directly.

I wonder what my publisher would say if I wanted the bikini pic to be on my next cover. He saw it on FB earlier and sent a private DM: WOW! You were hot!!! I shot back: Still am, sweetie. We have a terrific rapport...

It is a great photo, Betsy! My mom taught me to have "walking around" money, too. I think she called it "pin money." When she was young, she'd put some coins in a "hankie" inside her pocket book, probably enough to get to that pay phone. Best of luck with the new book!