Plaid for Poppy by Donna Michaels

Sorry this is a little late. Two significant events happened yesterday. The first--we buried my father-in-law. He passed away Saturday morning after his long battle with cancer. Bless him, he was a stubborn man who hung on for his 56th Wedding Anniversary which was Friday, not wanting to ruin that date for my mother-in-law. He did things his way right until the end. 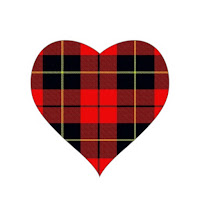 Poppy loved his flannel and plaid shirts and to roll up his jeans, we called his Fonzie pants. That was how he was laid to rest, and on the night of his viewing, me, my husband, and our children all wore plaid for Poppy.

This week has been sad, but we've also been laughing a lot at some wonderful memories. Poppy had a great sense of humor and was practical joker, something his son inherited, which of course, was what attracted me to Michael. I was seventeen when I first started to date my husband, and thanks to Poppy, no matter how old I get, I will always feel young because of the nickname he gave me. Kid. He was such a great story teller, too. I was always amazed by his memory, but most impressed with the way he summarized the boring details with...yadda...yadda...yadda.

My least favorite part of writing is the fluff! Now I know how to handle them. lol I never thought to use...yadda...yadda...yadda. :-) So, you just might see that in my books from now on. I'm sure my publishers wouldn't mind. lol

The second significant event that happened yesterday, was the release of my Mini Movie by the wonderful Jackson Young for HER HEALING COWBOY.

In this story, my hero Jace lost his father to a disease when he was young. His dad was HIV positive from a blood transfusion, and this shaped his life, and made him determined to become a doctor so he could join Doctor's Without Borders to treat, and help spread awareness to families of those afflicted in Africa on how to live with the disease. He's just waiting until his commission runs out with the National Guard, then he'll join DWB and be on his way. lol Nope. He meets, and falls for, the niece of one of his patients, a very giving woman who is only in town temporarily to help run her uncle's ice cream shop while he recovers from surgery.

Jackson did a fantastic job of capturing, both the importance, and playful essence of Her Healing Cowboy in such a short, limited timeframe. And the incorporation of percussion work lent by Tom Larson who has done some amazing efforts in Africa, just ties it all together.

Thank you for letting me pay tribute to Poppy, Jace, and Jackson today.

Posted by Donna Michaels at 6:32 AM

So sorry to hear about your father-in-law, Donna. Obviously a tough time for you. Keeping you in my thoughts as you move forward through these next weeks. The mini-movie is really cute. Maybe they'll turn it into a "big" movie one of these days!

I'm so sorry for your family's loss, Donna, but what a wonderful tribute to your father-in-law. I can picture the outfit. :-) Like Jannine said -- terrific "mini movie"!

What great memories you have from your father-in-law to help you & your family work through your grief. My sincere sympathy. Love the plaid.

The mini-movie is terrific! Better than a trailer. Best wishes on your new release.

Poppy sounds like a great guy. Lucky you for the memories he provided. Sympathies to you and Michael and the kids. Nice looking movie, too. Best of luck with all of it and yada yada yada.

Thank you, Jannine, Leah, Diane, and Margo. It's hard to believe he's gone a whole week already today, but life does go on. Keep my mother-in-law in your thoughts and prayers. She was with him for 61 years total, so going on without him will be hard.

Loved my mini movie. Jackson is such a sweetheart, and very business savy, so working with him was great.