So, last month I mentioned EVERY MOVE SHE MAKES would be featured on BookBub. I figured my fellow writers might be interested in the results. I can sum them up in one word: WOW! Impressive doesn't begin to cover it. All I can say is BookBub was worth every penny my publisher paid--and it definitely isn't cheap! Okay, I'll quit gushing and get to the stats. 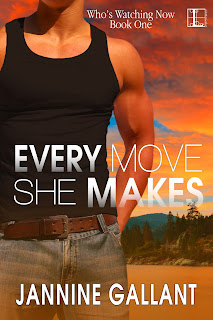 My book was listed on sale for 99 cents in the Romantic Suspense category. The cost for this is $380 and your listing goes out to 1,210,00+ readers. Granted at 99 cents (after the retail sites and my publisher and my agent get their cut) I think I was making 7 cents per book. If I did the math right! Still, the fallout was extraordinary. I got down as low as  #1 for Romantic Suspense and #34 over all at Barnes &Noble. Results were similar at KOBO. On Amazon, my lowest ranking was around #145 overall. Of course these numbers didn't last long. Slowly they began to rise. The sale price on MOVE remained for two weeks until EVERY STEP SHE TAKES released on July 7th. 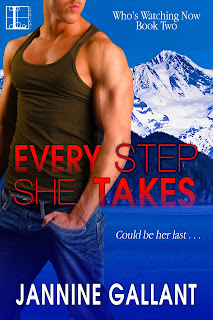 At that time, my Amazon ranking for MOVE was back up to about 20,000. This is when I got super excited. A lot of those readers who downloaded the first book on sale started buying the second one. STEP's numbers dropped pretty fast. Then, even better, MOVE's number started going back down. I was stunned and thrilled. For over a week now, both books have been hovering in the 3,000 to 6,000 ranking range. I'm actually selling books for the full price. (Me, throwing confetti and cheering!) And get this, the third book, EVERY VOW SHE BREAKS, due out in March of 2016 started to get pre-orders. No blurb. No cover even. But people were ordering it! The publisher scrambled to put up the cover on the retail sites. Pre-orders got even better. Right now (or at least a couple of day ago when I was writing this post) that book is hanging in the 20,000 to 30,000 range. Amazing! Check out the cover below. I like it, and apparently readers do, too! 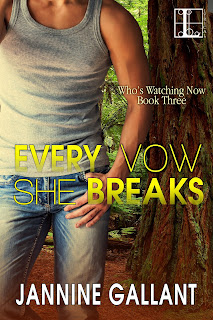 So, what do you know. All those people who say you have to spend money to make money are actually right. Had my pub not gotten my book on BookBub, all those readers who downloaded it on sale would not have known I existed. They would never have picked up the second book. So, a combination of high exposure and having a good product (if I do say so myself!) and having the second book ready to go really produced results. How long will these sales last? I don't know. I'm keeping my fingers crossed they'll hang in there for a while at least.

Now, on to my news... I just signed a four book deal for a new series with Kensington's Lyrical Press line. I asked for a mass-market paperback deal from their paperback division. They said I'm not ready yet. They hope after one more digital series, I'll have enough name recognition to be ready for paperback in the future. After these results, maybe they're right! At any rate, I'm happy to say I signed on the dotted line. The new romantic suspense series, BORN TO BE WILDE, will debut in the fall of 2016. The first book is written. The second is almost finished. Now I have deadlines for the final two books to meet. I gave myself six months per book. Wish me luck!

So, the moral of this story is good things can happen for all of us if we just keep at it!

For more info on my books check out my website or purchase my books from Amazon, Barnes & Noble, KOBO or iTunes.
Posted by Jannine Gallant at 12:01 AM

Email ThisBlogThis!Share to TwitterShare to FacebookShare to Pinterest
Labels: BookBub, Every Move She Makes, Every Step She Takes, Every Vow She Breaks, Jannine Gallant, Kensington Books, lyrical press, The Roses of Prose Where Romance is Never Out of Season

Wow, that is wonderful, Jannine. I'm so glad you shared your experience with us.

Congrats, Jannine! Very interesting info about your experience with BookBub.

Congratulations, Jannine! You are on a roll, and with a great publisher, too. Sounds as though you have a wonderful career going. Keep writing.

Awesome news, Jannine. Just awesome. One of my fireman books was on Bookbub this week and was listed--why I have NO clue--in erotica. I made it to number 3. Number 1 and 2 were the Kindle and Audio versions of Grey. But it's had a trickle down effect to all my other books with increased sales in them. As to your new contract, I'll throw some confetti for you. Sometimes a breakthrough seems a long time coming. But isn't it SWEET when it does? Yay you.

Amazing, Jannine. I'm thrilled for your success and encouraged by your experience with Book Bub. You're showing a shrewd business sense and a persistence I admire. You're definitely on your way, my friend. I like the Borne to be Wilde series concept...looking forward to reading all of them!

Wooo to the hooo, Jannine!! Wonderful news all around! I am seriously happy dancing for you! And I can't wait to read 'Vow' and your new series!

I agree on the waiting. We have been in the trenches a long, long time. It's nice to finally see yours take off!!

Way to go, Jannine! Good luck with sales. Write on.

What great information! Thanks so much for sharing and I wish you much-deserved success from all your hard work!!

Awesome news! Thanks for sharing!!

Soooo happy for you, Jannine! Wonderful results and even better news! Woohooo!

Thanks for sharing! That's wonderful news for you! Yeah! Congrats!

Wow, I'm at work. Saturday at the boat ramp...need I say more. When I finally got a chance to check the blog, I had all these wonderful comments! Thanks to everyone for stopping by and all the congratulations and good wishes. They're much appreciated.

Great results! Nice your pub paid, however. Having to dish out $800 for a mystery is a bit much for me. Thanks for sharing.

Fantastic news, Jannine! I'm so happy for you. Thank you for sharing your results.

It was very nice my pub paid. It's tough to shell out that kind of money when they don't. However I know indie authors who say it's worth it. Happy to share, ladies!

I'm so happy for you, Jannine! And thank you for sharing this and giving hope to the rest of us.

This is so freaking exciting! How did you ever keep it under your hat? Your BookBub experience sounds like a combination of smart marketing strategy, perfect timing with the second book, and great writing. I'm thrilled your dedication and hard work are paying off this way. Can you hear me shrieking all the way from Carmel?

Fantastic news! Congratulations!
Thanks for sharing you BookBub experience.

Glad your results were so good. Nice when your pub pays, too. I love the fact that pre-orders are running high. Keep the momentum going.

Congratulations, Jannine! I am so glad for you!

Thank you, ladies. I've been pretty darn excited about this but saved it to share here. The timing was perfect--which wasn't a fluke. Kensington waited to do the BookBub promo when we could take advantage of the new release to increase those sales. I'm just happy readers are ordering the 3rd one, too!

Wow. Nice to know that BookBub still works. Can't wait until I can afford to use it as well.

Thanks for sharing, Jannine!

Don't think I can grin much bigger here. As your initial editor, and knowing how very hard you have worked this is great stuff. Congrats and thanks for sharing.

Thanks, Margo. Your editing is priceless!