Exclusive Excerpt from MARRIED ONE NIGHT (On Shelves Now!) 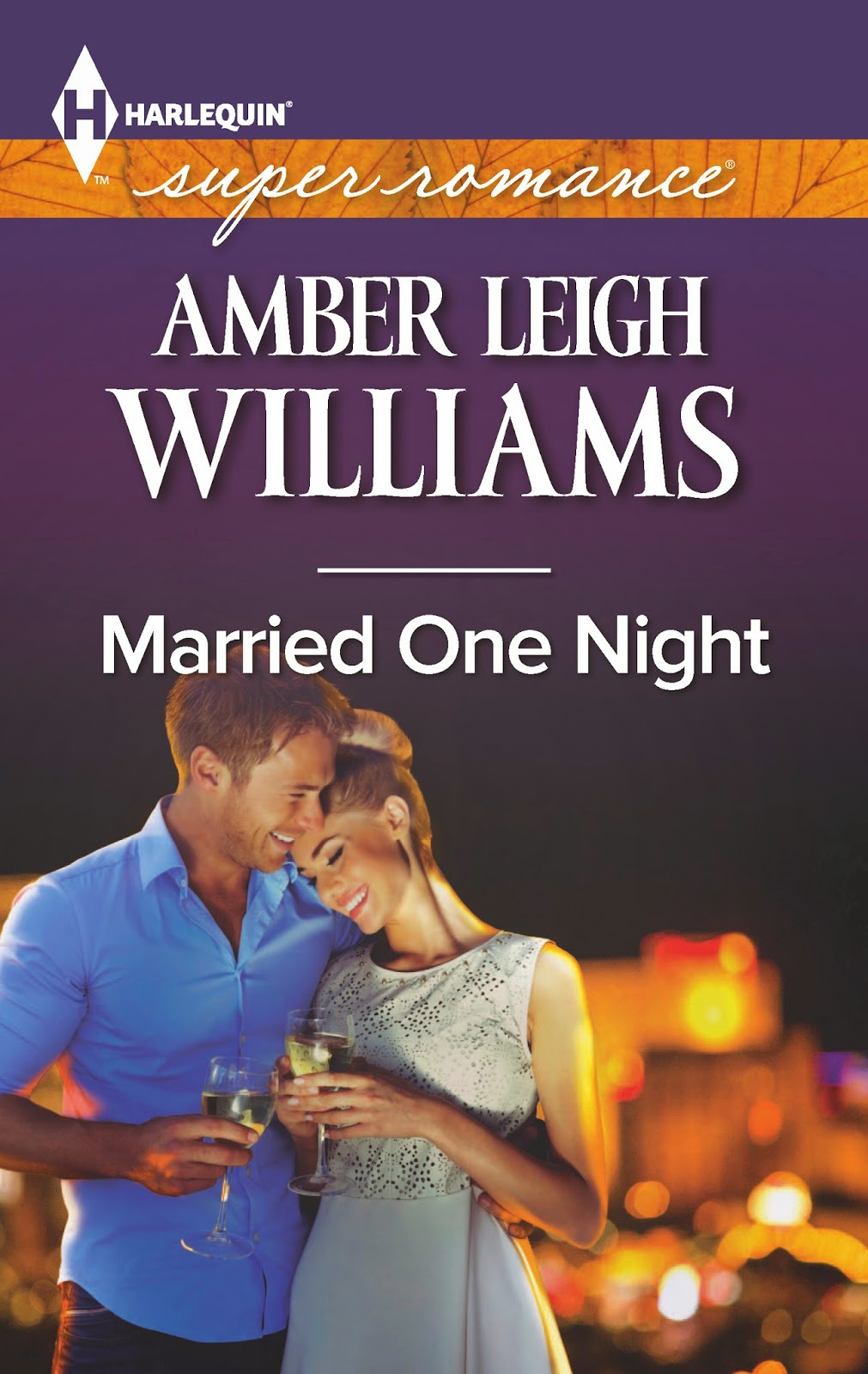 You see the signs everywhere: Keep Calm. Keep Calm & Carry On. Keep Calm & Eat Chocolate. Keep Calm & Dance On. My personal favorite? Keep Calm & Call Batman! But I’m a writer. I can’t keep calm and neither can my characters – because in the fiction industry, conflict drives the story. This means that my job is to learn my characters’ goals and fears and create a story in which everything goes wrong for them. It’s true, it’s a cruel process. My heroes and heroines have been known to hate me on occasion. But even if I know that my heroes and heroines deserve a happy-ever-after scenario, the reader wants to see them earn it. And nothing turns pages like good character-driven conflict. So, no, my characters normally do not keep calm. In most cases, it’s the opposite. 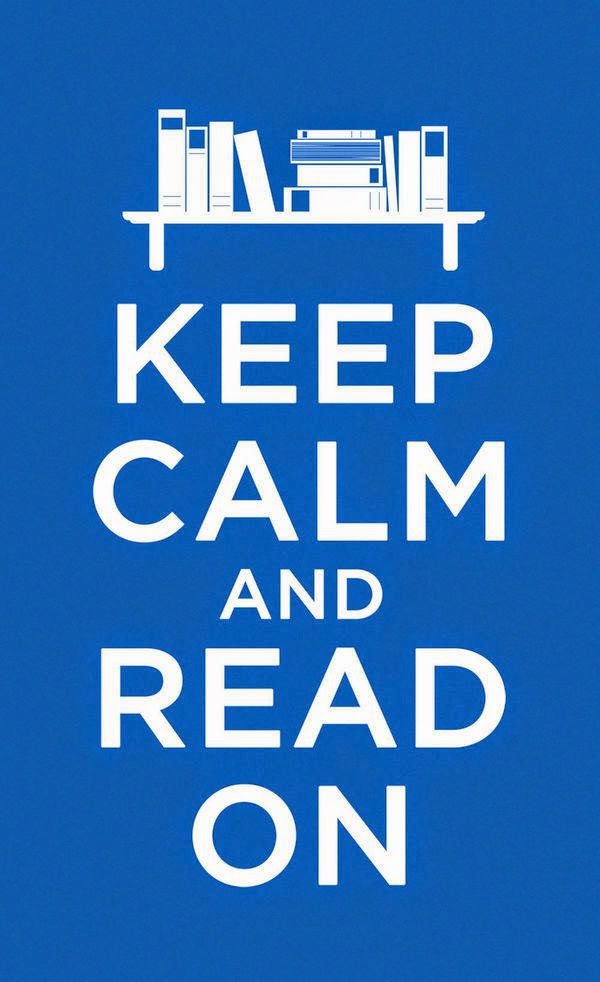 My second Harlequin Superromance novel, Married One Night, is on the shelves now! The heroine, Olivia Lewis, is a confident, independent woman who isn’t the marrying type. She loves her single life just as much as she loves being a sole business owner and living by her own set of rules, particularly when it comes to relationships (or lack there-of). She appeared as a colorful secondary character in my first Superomance novel, A Place With Briar (April 2014). In some of her first notes to me on the book, my editor expressed interest in Olivia’s character and her story potential. I quite agreed. Olivia is one of those characters who are fun to write but who also create an intriguing story quandary. Out of all of her friends, Olivia is without a doubt the matchmaker. However, she’s alone and has no interest in being set up with a man who’s interested in anything more than the short-term. Why is that? Once I had the answer, I wondered what kind of man could change that? 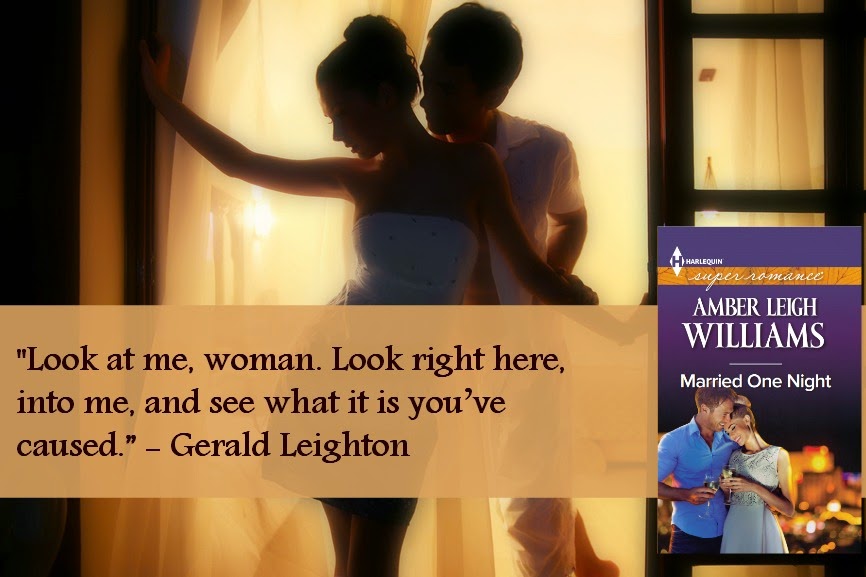 In the beginning of Married One Night, Olivia finds herself in bed with a stranger after a night well spent in Las Vegas, Nevada. The stranger in question is charming and handsome British writer Gerald Leighton. The two later realize that amidst their wild night in Vegas that they got married. Despite the fact that her impromptu husband is any woman’s dream, the commitment-phobic Olivia is all-too-eager to end this arrangement. When Gerald follows her home to the Gulf Coast to convince her to give their relationship a second chance, however, she’s resistant because she knows he is exactly the type of man she could fall head over heels in love with if she’s not careful. Gerald has three weeks to woo her; Olivia has three weeks to resist…or do her best…. 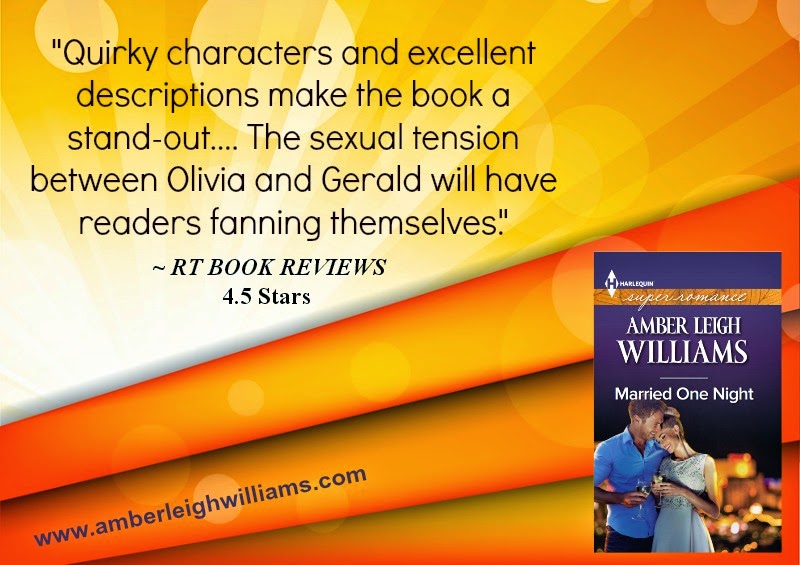 Here’s an exclusive excerpt from Married One Night just for you, readers! I hope you enjoy….

“I have a wee bit of a suggestion.”


“If it’s not related to annulment or divorce, you might not be walking out of here in one piece,” Olivia pointed out, trying to smile. He couldn’t be crazy enough to suggest that they actually remain married, for heaven’s sake.


Gerald made a thoughtful noise in his throat. “Well…”


Olivia’s smile fled and she looked at him as if he were crazy. “Okay, now you’re scaring me.”


“Just hear me out,” Gerald advised, lifting a hand in plea.


“No,” she said and snorted out a mirthless laugh. “No,” she said again just to get her point across. “I have no idea who you are. You don’t know anything about me, despite what your publicist or whoever might have told you. The only thing we have in common is one drunk night in Las Vegas.”


“How do you know that, love, when, as you say, we don’t know each other yet?” Gerald challenged.


Olivia’s mouth dropped open. “Because this is me,” she told him, lifting her arms to encompass the tavern. “And you’re…well, you’re expensive shirts and tailored suits and spicy aftershave, which I have no doubt costs more than our sham wedding. We’re clearly from different parts of the world as a whole. How could you possibly think there’s anything there?”


Gerald’s eyes locked on hers and sobered once more. “Because of what I felt, the morning after.”


Olivia fell silent. “What you felt?”


“Yes,” he acknowledged with a dip of his head. “I…” He sighed, shook his head and narrowed his eyes on the windows next to the table as if trying to see the squall beyond the weeping, wind-buffered panes. “Well, suffice it to say, I felt more in that one morning than I’ve ever felt during any one of the lengthy relationships I’ve had throughout my entire adult life. And I think that’s worth something.”


Olivia’s mouth opened, then closed and opened again. “It was the drinks, like you said.”


Gerald gave her a baleful stare. “We both know we were clean and sober the next morning, Olivia. Can you honestly tell me that night or what was shared between us the following morning meant nothing to you?”


She chose to ignore the fact that she’d been thinking of little else since her flight back to Alabama with the girls, and simply lifted her hands and shoulders in a helpless gesture. “It couldn’t. There was nothing. It was nothing.”


Gerald studied her carefully for what seemed like an eternity. Finally, a slow grin crept over the lower half of his face, warming his eyes. The smile was like a sucker punch to her resolve. And damned if he didn’t know it, Olivia thought. He took another sip of beer, leaned back in his chair and hooked one loafer-clad ankle over the opposite knee. “I’d like you to prove that.”


“A wager, if you like,” he told her. “Come now, Olivia. You’re a small business owner. Small business is a gamble at one time or another. And you strike me as a woman who enjoys a challenge.”


“So what if I am?” Olivia asked. “How would that change anything?”


He lifted his finger and pointed at her discerningly. “There’s a lovely bed-and-breakfast next door to the tavern. If my publicist’s sources are correct, it’s your cousin who owns it. I’ll stay on there for a three weeks, just long enough for you to prove to me that what we shared in Vegas was indeed nothing.”


Olivia frowned at him. “If I were to agree, you realize you’re betting on a losing hand, right?”


“Maybe,” Gerald said with a considering nod. “But my gut is usually right. And it tells me that the place I need to be, at least for the time being, is right here in your charming little hometown.”


She narrowed her eyes as she considered him. Damn it. She did love a good challenge. Especially one where all the odds were in her favor. “Hmm. What are the stakes?” When Gerald’s brows arched, she added, “What’s a wager without stakes?”


“Oh, right.” He grinned, lifting a hand to scratch his chin in a pensive manner that made her stare a moment too long at his wide-palmed hand with its narrow, creative fingers. “If you win, I will humbly admit defeat and hand over the divorce papers. And I’ll pay whatever legal costs filing them incurs.”


Gerald’s eyes shined anew with the light of promise. “Then what do you say we give this a shot, aye? You and me. I have a feeling it’ll be worth it. And on a hunch I’m rarely wrong.”


Olivia weighed him and his challenge. When he extended a hand for her to shake in agreement, she sighed and lifted hers to take it. “What the hell? You’ve got yourself a deal, Mr. Leighton. I hope you’re not a sore loser.”


Gerald didn’t shake her hand. He squeezed it warmly and leaned forward until his green eyes yawned before hers and that aftershave of his washed over her in a splendid wave she was sure never to forget. “I rarely make wagers, Mrs. Leighton. But when I do, I play to win. And I’ll be damned if I don’t win this one.”

You can learn more about Olivia and Gerald and read more excerpts from Married One Night by following the virtual book tour at Pump Up Your Book or by visiting my blog for weekly updates. The tour starts today! 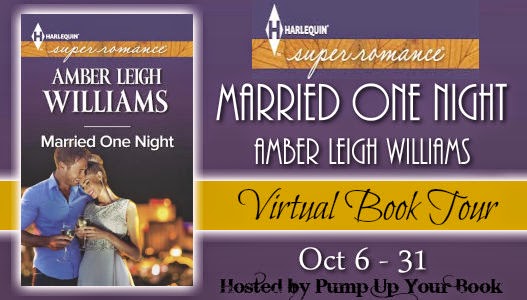 Buy Married One Night in store or online:
Amazon
Harlequin
B&N
Kobo
GooglePlay
Posted by Amber Leigh Williams at 1:00 AM

Email ThisBlogThis!Share to TwitterShare to FacebookShare to Pinterest
Labels: a place with briar, Amber Leigh Williams, exclusive excerpt, harlequin, harlequin superromance, keep calm and read on, married one night, pump up your book, rt book reviews, The Roses of Prose

Thanks for sharing! Congratulations on your success. Enjoy!

Wow! Thanks for this. Love this interplay between the two characters. Another for the TBR pile! Liked the comment about hurting our characters and having them sometimes hate their writer - I've a couple of misbehaving characters that I'd love to hurt right now :-)

Great excerpt. Yes, so true. We do not want our characters calm and happy. Where's the fun in that? Congrats on the new release!

Fantastic excerpt, Amber. :-) Wishing you tons of success with the new book!