Based on a True Crime by K.T. Roberts


Please join me in welcoming K.T. Roberts as our guest blogger today. She giving away two digital copies of her book so please read to the end and leave a comment. Good luck!

First, I’d like to thank you for inviting me to spend the day at The Roses of Prose blog. I’m always flattered when someone invites me to participate and it’s an honor to be here.

So today, I’m going to talk about the release of Deadly Obsessions, the third in my Kensington-Gerard Detective series. This, however, is more of a thriller than a mystery, so if you like the Lizzie Gardner series by Teresa Ragan, you’re going to love this one too.

Deadly Obsessions is based on a true crime that happened here in Arizona in 2009. For those of you who followed this story in the news, it took place in the Hillside Ranch area of Glendale, Arizona when Cynthia Langrall was murdered during her morning jog on December 21, 2009.

My story has some similarities, but I’ve mostly embellished the story to make it my own, hence the thriller aspect. 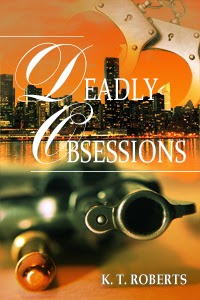 BASED ON A TRUE CRIME EVENT

Three bodies and counting . . . a manifesto with a long list of names . . . an abducted child, and the killer is using a familiar MO that was the trademark of a serial killer still at large. Is it possible this so-called copycat spurred the Red Reaper into a jealous rage and he’s doing what he does best . . . killing? Or is this someone who’s having too much fun impersonating him and killing everyone on his list?

When two unrelated killings take place, it sends the detectives into a tailspin . . . and now it’s a race against the clock before he kills the next person on his list . . . Detective Jesse Kensington!  http://amzn.com/B00KO42MU8

I’m extremely proud of this story. It’s the story that landed me a contract with Montlake Romance two weeks ago. To whet your appetite, I’m including an excerpt.

This excerpt is about Jennifer Smith who has been abducted by a cab driver while on her way to the NYPD to answer questions. The abductor has her chained in the basement.

I will be giving away digital copies of Deadly Obsessions to two lucky winners. Winners will be selected at random. All you have to do is comment on this excerpt. Winners to be announced at the end of the day.
Thank you for inviting me. I look forward to your questions.

Connect with me here:

Really creepy--which is a good thing! Congrats on the contract. Wishing you many sales.

Welcome, K.T, and congratulations on the contract with Montlake! What a creepy excerpt! (I swear I didn't read Jannine's comment first!) :-) I felt myself pushing back in my seat (to escape the guy) as I was reading! Wishing you much continued success. :-)

Love it! Nice and creepy, just my style. :) Huge congrats on the contract. That's very exciting! I love that this was based on a true story. Makes it more chilling. So glad you came by to visit us today!

Thanks so much for commenting Jannine. I'm glad you liked the excerpt.

Leah, Thanks so much for the kudos. I'm super excited about my contract.

Alicia, awesome that my writing is just your style, and it's a good thing because you just won a copy of Deadly Obsessions! Please send me the email address that you use on Amazon so I can gift you a copy.

Send you information to htmmah@gmail.com

Thanks for stopping by to read my blog post and for commenting.

And the second winner is Leah St. James. Please contact me at htmmah@gmail.com with the email address you use on Amazon.

Late getting here, but wanted to offer my congratulations too. Best of luck.