Falling Between the Sheets

Writers are often great procrastinators. At least I can be. Take right now, for instance. I'm supposed to be writing the first sex scene of the book I'm frantically writing so I meet my deadline in three weeks. Instead I'm writing this blog five days early and, for a person who typically writes them the night before, this ought to give you an idea how much I dislike writing sex scenes.

I've written roughly twenty. You'd think it would get easier to have my characters fall between the sheets, if they even make it to the bed. But I want every act of intimacy to sound different, feel unusual for the reader.


Let me ask you, how many ways can one make the same act sound diverse?

It's kind of like eating a bagel, isn't it? We can eat them plain as we run out of the door. Spread them with cream cheese if we have a few extra minutes to add something special. Or use a variety of different toppings, if we want to enjoy a taste of something different. But in the end, we're going to open our mouths and take a bite--and enjoy. 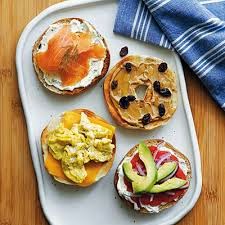 Personally, I'd sooner toss my characters a plain bagel and yell, "Have a good day!" The next sound I'd hear would be my editor falling out of her chair. Editors want excitement, pizazz and lots of fillings on their sex bagel. This is where the emotions between the two people come into play. The experiences they've shared so far and how they feel about one another. I'd sooner dwell on this than the physicality of everything. Once again, editors don't always agree. Maybe I'll toss them the plain bagel...

Highlands, bear shifters, an animal communicator, a hippie in pink pelican baffies (bedroom slippers) and a bit of a mystery. A HIGHLANDER'S OBSESSION 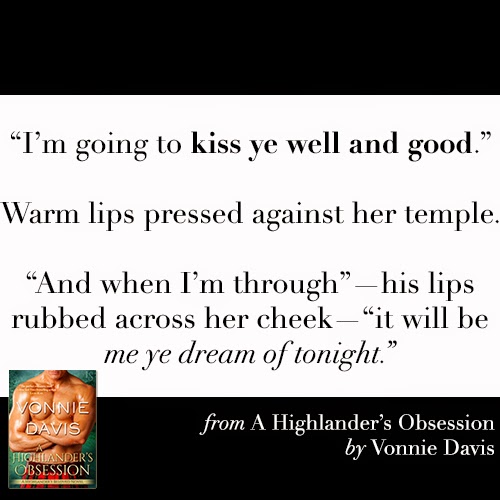 It's so funny that you know the number of sex scenes you've written! I agree, you have to try to give each its own textures and layers, but that's hard since writers often have comfortable go-to words and phrases. And we all draw on our personal experiences too, which are naturally limited by one thing or another.

Love the tease to "Highlander's Obsession," BTW! Hope by now you've tackled that scene and are well on your way to making the deadline. :-)

I'm with you, Vonnie. Most guys are content to just eat the danged bagel plain without any fancy trimmings! And I'm completely fine with that! I shoot for 3 of THOSE scenes per full length book. Usually I'm thinking, "Oh good God, I'd better get them into bed (or wherever) soon or I'll run out of pages. Not my latest WIP. The h&h don't seem to have any problems in this area and are dragging me along for the ride. You're probably agonizing over the second romantic encounter by now. Wishing you luck and creativity!

That certainly is one heck of a fine tease, Vonnie! I also concur with the eeeewwwww factor at having to write the you know what scenes. ;-) I'm with Jannine. I'll be contentedly writing along when I think - well crap - it's time for one of those! Best of luck with this one too!

Enjoyed your post, as usual. I feel your pain about sex scenes. One big advantage to Indie is that you can put in the exact number of sex scenes needed to fit the story, not to fit what an editor or publisher is looking for. I'm sure you managed to complete the scene and that it was wonderful!

As an author, the sex scenes are the toughest part to write for me, too, Vonnie. Especially with the kids coming in and out of the room. Or my parents who now have moved in with us. Some days I end up writing this instead (Insert sex scene here). lol, but as you know, I need that scene to move on, so it can't stay that way for too long.

Of course, as a reader, I enjoy reading them, getting to that first time, the build up...the consummation. That strengthens the character's relationship, even if they didn't want one. Sometimes it makes them fight their attraction even more. Ah, good times. ☺

Great post, Vonnie. I've never felt the need to "stick in" a love scene. It has to come naturally from the relationship in the story. Sometimes my characters have known each other a long time and get right to it. Often though they dance around it because they're really not ready. I've read books where it seems like the scene was stuck in because it was "time" they did it. As Alicia pointed out, we Indie writers can do what we want.