Free Books and Cowboys - What's Not to Love? by Jannine Gallant

Yep, Asking For Trouble is free for five days only on Amazon! You can get your copy HERE. 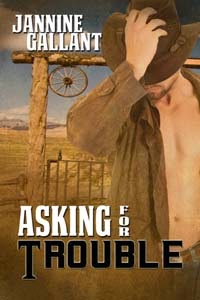 Why should you download it, you might ask? I know, I know—there are a gazillion free books floating around out there. What makes mine special? We all think are books are special, right? That's why we love them. So let's see if I can come up with a few reasons Asking For Trouble is unique. And, I'll give you some book snippets to keep you interested. (I hope!)

1) My hero is a cowboy who makes his living with a chainsaw.

Only one thing in the state of  was louder than the whine of Cole Matheson’s chainsaw—the red-haired demon child he called a nephew. Easing a final cut into the cedar antler of the life-sized moose, he killed the engine, pushed safety glasses up beneath the brim of his weathered tan Stetson, and turned on the ladder to stare down at the baby squirming in his brother’s grip.
“How do you stand that racket?”
The screaming stopped, leaving blessed silence, as the ten-month-old grinned a mostly toothless smile and waved pudgy arms.
“What kind of question is that coming from a man who makes a living with a chainsaw?”

2) My hero uses duct tape to fix his problems—okay, lots of guys do that. But how many use it on a baby?

She raised her hands, palms out. “I change enough diapers during working hours—where I’m paid. Go ahead.”
His pleading look had probably charmed plenty of women out of their panties. Miranda crossed her legs.
“I suck at it. Please.”
Drawing in a breath, she silently called herself a sucker, but finally relented. “Fine.” Laying on his back, she slid down his little blue jeans—and stared in utter disbelief. Silver duct tape wrapped around the disposable diaper in a diabolical pattern. Maybe if she had some scissors… Lifting her chin, she met Cole’s gaze and raised one brow.
His cheeks reddened. “The diapers kept coming loose and falling off. Duct tape fixes everything.”

3) My hero proposes with a purple plastic ring.

The door slapped, and his boots thumped. When she opened her eyes, he was kneeling before her with his fist held out. Slowly, he turned it over and opened it. On his palm rested a purple rubber circle with yellow stars stamped into it. Miranda pressed a hand against her mouth to keep from laughing.
“It came off one of Jackson’s toys, and I stuck it in a drawer to keep him from eating it.” Cole took her hand and held it tightly between his. “I love you more than chocolate bars and chainsaws. Will you marry me and make me the happiest man in ?”

Does Miranda say yes? Download the book to find out. Did I mention it's free Feb. 18-22. LOL Just click HERE.

Thanks for stopping by. For more info on all my books, visit my website.

Email ThisBlogThis!Share to TwitterShare to FacebookShare to Pinterest
Labels: Asking For Trouble, cowboys, free book, Jannine Gallant, The Roses of Prose Where Romance is Never Out of Season

May I be the first to say this is one great book! Cole is a keeper!

Thanks, Margo! Cole has a style all his own.

Loved the clips. Got the book and am looking forward to reading it. Duct Tape- my sons favorite tool.

I think all men have a thing for duct tape! Thanks, Barbara. Enjoy!

Great post, Jannine! I have a soft spot for any cowboy named Cole. lol I downloaded Asking for Trouble and look forward to reading your Cole! Best of luck!!

Donna and Rose, thanks to both of you. Hope you enjoy my Cole's story!

Great excerpts. You convinced me. It's now on my Kindle.

I downloaded the book. Can't wait to read it! I love the way you did the post with your facts, then the cute little snippets to support them. NICE! You definitely made me want to read it.

Once in a while I have a clever moment. LOL Glad you downloaded. Enjoy!

What a coincidence, Jannine - I came across your book on Freebooksy, checked it out and loved the blurb, so I downloaded it - hours before seeing this blog! Lots of success with it. On my TBR pile and will leave a review.

Thanks, Glenys! Yep, I've been making the rounds, posting everywhere about this.

Any book with chainsaws & duct tape has to be good. :) Got mine.

Now that's funny....and duct tape DOES fix everything! I have a bad habit of saving blog posts to read a few days at a time, but thankfully I didn't wait too long to grab your freebie. Thank you! :-)

Glad you got it, Leah. Enjoy!