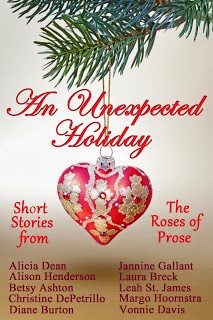 Check back tomorrow for Chapter Two of Christmas Sham...
Posted by Alicia Dean at 1:00 AM

Oh my...storms brewing already! Great premise, too. I love this line: "What kind of narcissistic princess got married on Christmas day?" Another terrific story!

Sooooo much emotion to share. Will they ever get along? Nice job!

Thank you, ladies! I really enjoyed writing this. I hope you enjoy the rest of the story.

Okay, he can't be as bad as she thinks he is--can he? LOL Great beginning, Allie!

Awesome start, Alicia. You've elicited some reactionary emotions in me, which is always a good sign of a well-written story.

Well, now, this sounds like a fun story. :) You've caught my interest.

LOL, Jannine. One would hope not since he's the hero... However, I do like bad boys. :)

Thank you, Vonnie. That's great to hear since I worry about how the emotions come across in my stories.

I'm so glad I've caught your interest, Diane. Hopefully, I'll hold it. :) Thanks for stopping by!

Hmm. I had added "chortling and rubbing hands together" to my previous comment, but apparently Blogger edited me. What does that say?

Crap. I have to wait to read more? What kind of Demented Princess does this to her loyal followers over a Christmas story? Oh, an editor princess. . .grin. Can't wait to read the next installment!

Hahaha, Ashantay. I seldom, if ever, have been called 'princess,' but I do call others that. :) I'll take it, though...editor princess has a nice ring to it. Thanks so much. Glad you enjoyed it.