My current WIP (work in process) is based on a real-life mining town turned ghost town turned tourist town. I fell in love with Jerome, Arizona years ago. In order to have more flexibility with the lay of the land and the history, I've renamed it Joshua. All the people in Joshua are purely from my imagination. This Romantic Suspense Series should keep you turning the pages long into the night. An unsolved murder from 1990 has a bearing on today…especially now that bones have been found in the Hippie section of town called The Ravine.

My first inclination was to write a three-book series set in 1969 followed by a three-book series set in today Joshua. What I settled on was the contemporary with flashbacks to those early days. I'm seven chapters in to book one. I had to make a chart of characters that are involved in the plot with their ages in 1969, 1990, and 2019. There are twenty-five of them so I definitely needed a chart. The book is set in 2019, involves a murder in 1990, and is interwoven with what happened in 1969.

I found I had to rename quite a few characters, too. Since it became a book within a book, I couldn't have names that sounded too much alike.

I’ll share one of those flashbacks with you today. Every flashback will be seen from the POV (point of view) of Frank Harlan MacKenzie, who came to Joshua in 1969, met Susie Muse and had three children, Magpie, Harlan, and Elidor. Frank and Susie were some of the first of the so-called Hippies that settled in Joshua. I can’t share the whole flashback because it’s too long, so here’s the latter part. He’s just dropped off his friend, Snuff, at the clinic. This is when Frank meets Susie…1969.

Frank closed the clinic door behind him and strolled through the archway that led to another part of the building. A sign intricately painted with scrolls and flowers read Knit Two Wear. The arrow pointed straight ahead. In the middle of the shop, Lolly—the Lolly—arranged some sort of knitted clothing on a rack. Even without seeing her face, she was hard to mistake for anyone else. He was just under six feet, and the woman stood nearly as tall as him. She had to weigh three hundred pounds.
She glanced up. “Good morning. Anything I can help you with?” She dressed the same as the first time he’d met her: full, floor length skirt, sandals, and a cotton blouse with a plunging neckline that left little to the imagination about an abundance of breasts. A leather strap held straight blonde hair at the back of her neck.
“I’m just looking around.”
“Please do.” Thick brows drew together. “We’ve met.”
“Yeah, first night I was in town. At your house.”
“That’s right. You live with Doug and Maureen.” She floated toward him, all fullness of skirt flouncing, breasts bobbing and threatening to break free of what little material covered them.
Her arms spread wide, and he suddenly dissolved into warm flesh. He could’ve laid his head on her shoulder and taken a nap. The scent of patchouli lulled him.
She stood back then, still clasping his shoulders. “My, you are a strong young man.” Her hands slipped to his biceps. “Mm—mm.” She winked. “Why haven’t you been back to my house?”
Her welcome hug could’ve turned into a whole lot more. She was really beautiful, but the beauty came as a result of the openness and warmth that radiated from inside her. Lolly held nothing back of herself. How he knew all of this with one hug and a wink, he didn’t know, but thoroughly believed.
“I’ve been busy getting settled and working on my sculptures.”
“Ohhh, you’re a sculptor.” Her fingers massaged his biceps. “I should’ve guessed.” Another wink, and she released him. “Well, you know where I am. You come around any time you want. My home is open most every night to all of our friends.”
Two women entered the shop from the street door. With a smile, she left him to greet her customers.
Having been officially welcomed to Joshua, he left through the street entrance and stepped into the almost noonday sunshine. This is home. He smiled.
The heat of eighty-degree weather penetrated his cotton shirt, and he rolled the sleeves above his elbows as he walked. Turning onto Cutway Street, aptly named as the road jutted upward at an angle to connect to Main Street above, his leg muscles felt the pull with the climb. He didn’t mind. Cutway Street dumped onto Main and into the heart of downtown Joshua. He took a deep breath as he paused at the top. He hadn’t quite acclimated to the elevation yet.
His stomach growled. He’d had only coffee for breakfast. The shop directly in front of him looked promising for food when he spied two wrought iron tables on the sidewalk in front. The sign above the door said “Susie’s” and was flanked by a window on each side. Over one window, “Wake Up Susie” was painted in purple and over the other window in bright taxi-cab yellow was “The Muse.”
He stepped through the open doorway, greeted by a delicious spicy aroma, as well as a nicely rounded bottom covered in worn jeans frayed on the leg edges and missing a pocket.
The petite woman belonging to the butt, bent from the waist downward, peeked around her legs. Black hair, so curly it hung in corkscrews, dusted the floor. “Hi!” She straightened from the shelf of books she was arranging and laughed. The sound was a melody. The face a work of art. Her eyes were the color of gold nuggets rimmed in the color of dark fertile soil. How appropriate for an old mining town. She smoothed her waist-length hair down without much success. Her ripe peach lips were moving, and Frank started with the realization she was speaking. 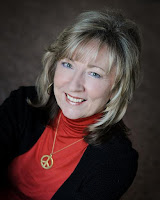 I write Romantic Suspense. You can find more about my books and me here: https://brendawhiteside.com/

Posted by Brenda Whiteside at 10:06 AM

Sounds like you're on a roll with your new series. Congrats, Brenda! Maybe the perfect titles will come to you as you write.

They usually do, Jannine. Thanks.

What a complex project, Brenda! I've never undertaken a story like this, but it sounds fascinating. I'm sure you'll do a great job, as always.

It's stretching me, Alison. Let's hope this old lady can stretch that far. LOL

I read your excerpt with pea green envy. I may have to go delete my WIP. This is fabulous. Go you! And I have no doubt you can handle the flashbacks of this series. Awesome stuff!

Another pea greener here. In a good way. What a fantastic excerpt. I love the idea of a book within a book. This has all the makings of a breakout series. As Vonnie said - Go you! Oh, and, I vote for Elidor Muse, not just plain Elidor.

Vonnie that is high praise considering the source. Blushing. Thanks.

Thank you so much, Margo. You guys know how to boost an ego.

Names can be so difficult. When writing my first novel, I realized that almost all the characters had names starting with M. I had to go back and change those that I could but it has made me more careful now. Love the name Joshua for a town. BTW, I'm headed to AZ next month to see my daughter. Can't wait.

I have my favorite letters too, I discovered. It's a big state and lots to see, but if you get up north for Sedona and the Grand Canyon, try to make a loop through Jerome, Robin.

I am so late in responding. Sorry! I heard of Jerome and planned to go there on our next visit. The one that didn't happen because we didn't go back to AZ to visit our son, because he now lives close by. Oh, well. I'll visit it vicariously through your series. :) This sounds like a terrific series. Good idea to ask your readers. They can be so helpful. Good luck.

Apologies for my lateness, too, Brenda. Fabulous excerpt! I love the setting and descriptions, the characters. I love it all
:-)