The Holidays are Coming! #amwriting by Andrea Downing

I know that there are a few holidays between Labor Day and Christmas, but I thought that I’d help to start getting you in the holiday mood.  Sadly, I had to decline joining my esteemed colleagues of The Roses of Prose in their forthcoming—and no doubt wonderful—Christmas stories due to the ongoing time spent on my new house on top of other obligations.  However, I am joining my former colleagues from A Cowboy to Keep in the forthcoming A Christmas Cowboy to Keep, coming out in October.  My own story is A Christmas Carole. So here’s what I’ve been working on folks! 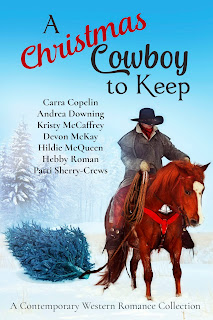 When single mom Carrie Matheson inherits a Wyoming ranch and moves out of NYC, her six year old son is not happy.  Trying to help Tim settle into life out west isn’t easy, especially when his pleas to Santa begin to get replies from a mysterious correspondent.  Is it the crotchety ranch foreman upon whom she relies so much? Somehow she doesn’t think so….
Tate Schrugge is amused by his new neighbor when she jogs over with some mis-delivered mail.  But Tate has just finished with a long-term relationship, and the lithe blonde in front of him has just called him Scrooge.
If these two can get together, it might be the Dickens of a romance.

A Christmas Cowboy to Keep goes into pre-orders on October 15 at Amazon.

What a fun story! Love the premise and what you've shared. Put a smile on my face. Good luck!

Clever, clever, Andi. You have a nice turn of words in the title and your cute Dickens line. Cowboys at Christmas...perfect!

I'm smiling, too! Love the excerpt, the characters...the setting. And I could almost hear the characters in the part about the big city girl "speeding" in Montana. You'll be sure to give us a link when the pre-order is up, I hope?

Sounds like a fun story, Andi! Good luck with this group project!

We'll miss you, but this is a great project. Best of luck!

Always happy to put a smile on someone's face, especially someone I know and whose opinion I respect. Thanks Brenda.

Hey Rolynn, I'd say cowboys are good any ol' time of the year, but thanks for the sentiment--and the compliment.

Leah, of COURSE I'll be here with a link! And glad you liked the excerpt. Thanks!

Thanks Jannine. The first anthology together did very well so we thought we'd give it another go. I hope it succeeds!

Alison, so sweet to say you'll miss me. Thanks. I was very sorry not to have time to write another Christmas story with you guys.

Great way to get us into the holiday spirit. Put a smile on my face too. You have me pulling for Tate and Carrie. Best of luck with this project.

Thanks Margo. Here in NY, the temps are slowly dropping and I'm soon headed to WY where they'll definitely be a bit cooler. Still work to do, smarten up the ms. though.