What Teachers Do You Remember?

I was blessed to have the same English teacher for both my sophomore and senior years of high school, back in '64 and '66. Miss Campbell was a walking grammar force. A compact lady, she always wore a suit, a matching three-strand set of beads, and thick heels. Her class was ruled with her iron-clad-pursed lips. She stalked the aisles between the desks, beads rattling in her fingers and looking down her nose at us as she barked grammar rules.

Heaven help you if you slouched in your chair or came to her class with a pencil that needed sharpening or didn't have neatly written homework ready to turn in. She suffered no fools.

Back then, we diagramed sentences and learned the structure and meaning of every word contained within one. 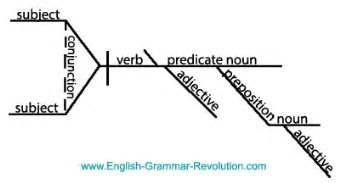 Miss Campbell with a fuzzy head of red hair owned an ugly faded brown suit she wore only on days she planned to spring a surprise quiz on us. Word quickly spread through the halls. "Quick! Study! Campbell's wearing that nasty brown suit." We were all trembling with nerves when we walked into her room. The map was pulled down to cover the precisely written quiz on the blackboard. And when she zipped that map up, you had ten minutes of brain-wracking hell ahead of you. While I remember all she taught me--and it was a lot--I never saw her smile. 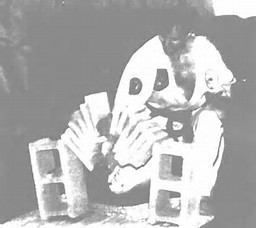 My son, a language arts teacher, operates by a rule: Never let your students see you smile until after Christmas. His students call him Professor Shubert. He puts on a demonstration the first day of school. A 5th degree black belt, he sets up a concrete block display to break with his hand.


Then he glares at his students and tells them there will be no disciplinary problems in his class. He tells them his room is a safe zone. No one gets to them unless they go through him. Some days he plays his guitar with raps he's made up with grammar rules. He has them place their chairs in a circle and he teaches by the Socrates method to encourage them to think on a deeper level. Every year he's voted the best teacher at the school.

Oh, he can be cranky. His room is his domain. He teaches his way. His students score high. And he expects to be left alone. He's happy his classes have not been audited or evaluated in three years, although he did ask the principal to sit in on one of his Socrates sessions to show him how this ancient method could work with 7th and 8th graders.

To Steve's delight, the students asked the principal questions, too, forcing him to join in the discussion. The administrator found Steve's students quiet, respectful, engrossed in the subject matter, and doing well. This included the lower-ranked classes Steve had emotionally built up by telling them no one thought they could learn this way. But he had faith in them. They snatched onto his faith and excelled. Steve believes in teaching up, not teaching down. 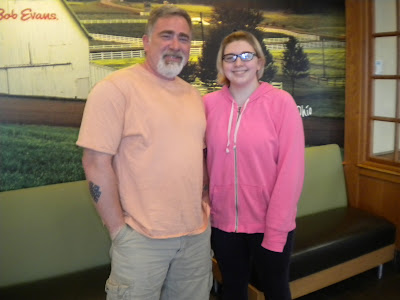 Steve and my high school junior granddaughter. She attends the Maryland School of the Arts for vocal music and theory.

Allison Moore the heroine in NIKO: Licensed to Kill is a high school Art teacher. I wonder what impression she makes on her students? Is she strict or open to new teaching styles? Boring or engaging? 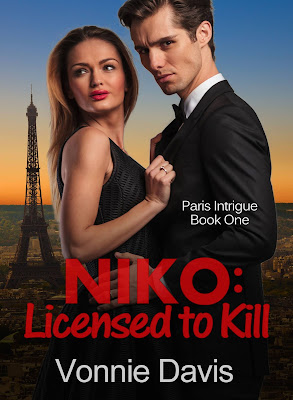 While the young man wasn’t blatantly tall, he was excessively male. Sex appeal oozed from every pore on his skin. Alyson’s body responded, which surprised her. She’d thought that part of her body long dead after a near sexless marriage.


With the firm and muscled, yet slender build of many European men, she judged him to be around thirty. He had an olive complexion and short, wavy black hair styled like that of a GQ model. His eyes were dark and angry.


What’s his problem? I’m the one held here against my will, hungry and thirsty. And, dammit, I have to pee.


The older man sat while Macho Male prowled the room like a tightly-reigned panther.


“Ms. Moore, I’m Field Supervisor Henri Moreau. I head the French task force on counterterrorism. The irritated man behind me is my second in command, Niko Reynard.”


The young man deigned to spare her a nod in greeting. Oh, she knew the type.


She nodded once in return with a dose of her own attitude. After all, she hadn’t been a teacher all these years without perfecting a piercing glare. One of his dark eyebrows quirked in response and a corner of his mouth quivered for an instant as if he were a heartbeat away from laughing at her. She hiked her chin and held eye contact with him for a few seconds.


Okay, so she was being bitchy, but after all she’d been through today, frankly she didn’t give a crap.


“We’ve reviewed the Louvre’s security tapes and completed a thorough background check on you.” Moreau flipped open a manila file. “You’re a high school art teacher from Asheville, North Carolina. Went to university at Duke. Additional studies in New York City. Worked for two years at the New York Metropolitan Museum of Art.” His head nodded as he cited her life’s history, almost as if it were nothing more than another series of boring facts—which unfortunately it was.


“You’ve been teaching art for thirteen years. Married for twelve. No children.” His gaze rose to hers. “You’re recently divorced. Your husband…”


“Ex-husband.” She crossed her arms and sat back in her chair. She may have to put up with this interrogation, but she didn’t have to like it. Nor did she appreciate having strangers inventory her personal life, no matter how damn boring it was.


He spared her the briefest of smiles. She closed her eyes, sensing what was coming next. “Your ex-husband is now living an openly gay lifestyle--"

A wounded sound escaped from her chest, her broken heart giving one last whimper of pain, perhaps. Robert had hurt her so badly.


Macho Male stopped pacing behind his partner and nudged him with his elbow. “Gentillesse, Henri.”

"Of course, one must always be gentle." The older man glared at her. "If it is appropriate." 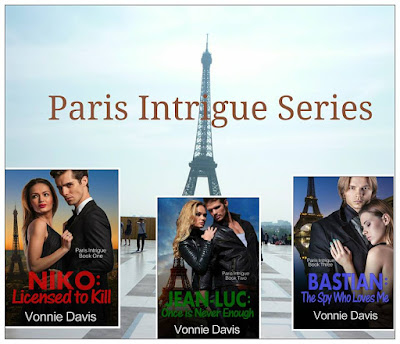 Two of my favorite teachers were from college -- a History professor (taught Women's History) and an English Professor (taught Poetry), and I still keep in touch with them even though I graduated 30 years ago!

Loved the account of your favorite teacher. That of you son simply blew me away. We need more like him. Fabulous excerpt. Us bitchy women rule!

Fun post and excerpt. I have a couple of favorite teachers going back to the first favorite in 3rd grade. One in high school kept her room so cold there was no falling asleep.

I remember my 5th grade teacher well, Miss Murdock. She was one of the 'cool' teachers and I loved her. She was also an excellent teacher and I learned a lot in her class. I also remember my German teacher in high school. Miss Edwards. Loved her too! Oh yes, and my first grade teacher, Mrs. Word. LOL. I always thought it funny that she was a teacher and her last name was 'Word' - (that was a looonnnngggg time ago!) I so enjoyed your stories about your teachers. Sounds like they were tough but effective. And your son must be an incredible teacher. I'm sure you're so proud. LOVED the excerpt...your writing is so captivating.

I had the same teacher for K-4 and for 5-7 in my little two room schoolhouse. We had grammar and diagramming pounded into our heads. Grammar is still a breeze for me, which is helpful in our profession. I remember my high school English teachers (Mr. Parsons and Mrs. Whalen) drilling us on vocabulary words. I can still use all those hundreds of words in a sentence of my choosing. Your son sounds like a gem! Great excerpt, Vonnie.

The teacher I remember most fondly is from fifth grade -- Mrs. Cottrell. She encouraged me in all sorts of ways, and I remember joining a summer reading competition at her suggestion. I also had a 7th grade English teacher much like your Miss Campbell, Vonnie. I can't remember her name, but I was terrified of her. Luckily it was one of my favorite subjects, especially sentence diagramming. (I loved it!)

Congratulations to your son for his methods and success. I'm not surprised the kids love him.

I read Licensed to Kill and I think Ms. Moore would be a favorite, too. She'd be serious about the art, but fun and inventive...with a great sense of humor. :-)

With school ending I thought it would be a fun time to call forth yesterday and remember the teachers we can still see and hear in our mind's eye. Odd how a brown suit can still be seen after sixty years. My son hates the end of school year. "I've gotten them thinking on a deeper level. Asking questions. 'Why does this make me angry?' or 'Why does this person act a certain way? Can I show them some human kindness.' In a few months I'll get a new batch of hormone-induced kids who want to strike out at the least provocation and start teaching them not only grammar, but how to be a positive part of society." He mentioned he has five more years to teach. His son told him he'd never retire. We all laughed.

I don't think I had any favorite teachers, though I remember them well, until college. Naturally it was my creative writing prof! But I do remember those sentence diagrams, Vonnie, and have to say, as strange as they may seem, I wish they were still taught. I still have my high school grammar book with all that in it. And the thought that many schools no longer teach cursive is just beyond belief to me.
Your son sounds like one helluva teacher. Well done!

I had to laugh at the no smiling before Christmas. My friend and I had a similar motto but ours was no smiling the 1st month of school. LOL I had a great h.s. teacher: Mildred Dell who taught Latin. I had her sophomore & junior year. Wish she had taught 3rd year Latin. She was an enlightening, supportive teacher who made a dead language so much fun, I chose to get a minor in Latin in college. Vonnie, your son sounds like the kind of teacher I would've enjoyed.

As an Army brat, moving so often, I find it hard to remember very many teachers beyond the unique ones...like Mr. Smith an English teacher in my on-post school in Korea. Superior English teacher, even if he had alcohol on his breath most times of the day. He was the one who encouraged me to go to St. Olaf when I told him my father was retiring and we were looking for a midwest college. Yup, a teacher determined where my family settled and where my sis and I want to college. Amazing. And so is your son, Vonnie...excellent teacher!