End of My Dry Spell by Donna Michaels

I can't believe it's already been a whole month since my last post! I really have to stop blinking! On a good note, since my last post, I have had two releases! Yes! Two! I've no idea why that happens to me. lol I haven't had a release since March 6th...so that's a three month dry spell between releases, then Bam! Two releases in the span of four days! Crazy is my life, so why not spill into my writing life as well? ;-)

You already know about ELITE PROTECTOR from my last post, but now it's live! I'm so honored and excited to be one of the launch authors in Elle James' Brotherhood Protectors Kindle World!

He risks more than his life protecting the commander’s niece.

Lured to the mountains of Montana under the assumption her uncle and her godfather recommended her as a bodyguard for Brotherhood Protectors—an agency started by one of their former SEALs—Kat Crawford, former NIO, discovers too late, she’s really there as a client.

Former DEVGRU SEAL, Brogan “Sonic” O’Neal, dropped his packet to return to Montana to take over his grandfather’s woodshop and care for the dying man. A deathbed promise to “not” return to the teams sentences him to life without the adrenaline rush he craves, until an old SEAL buddy hires him as a part time bodyguard for Brotherhood Protectors.

A request to protect the niece of a former CO lands Brogan his first assignment, but it could be his last. Keeping objective is impossible. He’s watched the woman grow up through pictures in the commander’s office. Now she’s at Brogan’s cabin. Their chemistry is off the charts. And giving into their attraction is as inevitable as a Montana sunrise.
But when Kat suggests the Brotherhood uses her as bait to end the threats once and for all, Brogan realizes his feelings for the woman run deep. Can he resist the alpha need to protect her? If he does, will she survive? If he doesn’t, will their relationship?

International Readers, click HERE for instructions on how to grab Kindle World books!

Four days after my KW release, I had my 3rd release with Entangled! THE RIGHT RANGER, released on 6/12/17!! The reviews have already been popping in, and they've been amazing! Here are a few:

5 stars "This book is like a fresh baked brownie with ice cream on top! Hot and sweet and oh so good! ~Shawn, Goodreads

5 stars "This captivating read pulled me in from the from the first sentence and had me flying through the pages in search of what I hoped to be a very well deserved happily ever after, and I am happy to report that I found just what I was looking for... and more!" ~Red's Romance Reviews 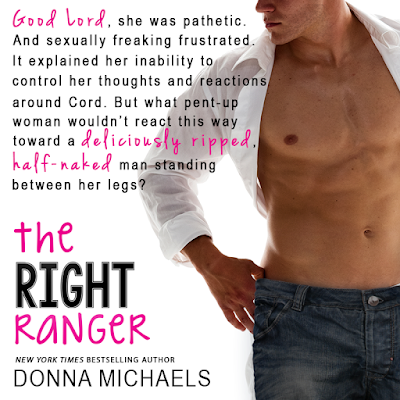 Haley Wagner’s life just got a lot more complicated. As if turning her struggling ranch around isn’t tough enough, she’s forced to call him for help. With his hard eyes and even harder body, Cord is an irritatingly sexy contradiction of hot and cold. How can she possibly hide her embarrassing secret when just looking at Cord is a combustible event?

Former Army Ranger Cord Brannigan has a secret, too. He promised his fallen teammate he’d protect the tempting, fiercely independent Haley from a distance, but now they’re stuck together for three weeks. Alone. Keeping his hands off will take every ounce of control he can muster. And that control is slipping…

What's next for me? Well, I'm already back in my writing cave, penning Book 4 in The Men of At Ease Ranch series. This time, I get to play...I mean, write Vince's story! 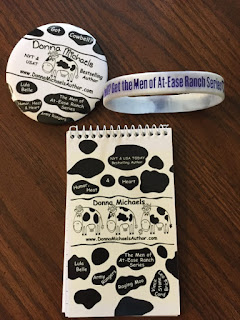 And next month, July 13-15, I'll be in Nashville for the Weekend With The Authors conference! If you're in the area, I hope you'll drop in on Saturday for the book signing! I'm hoping to have print copies of The Right Ranger with me, along with the first two!! And I'll have some fun swag to hand out, including these Lula Belle themed pieces of swag!

Thanks for reading,
~Donna
www.DonnaMichaelsAuthor.com

Congratulations on the new releases, Donna! They both sound fantastic!

2 releases? Wow! Congrats, Donna. You have double the promo to do. Good luck.

Releases are exhausting, but fun. Both your books sound awesome, especially the KW's one. I have two in the works. I wish you lots of sales and fun times and enjoy playing with Vince. Whoot!

Donna, congrats on your prolific year! I want to be just like you when I grow up, with stories literally flowing out of my computer! You go, girl!

Congrats, Donna! Have fun with your new releases. You go, girl!

Best of luck with your latest two! As has been said. You go, girl!