What Makes a Hero? by Mackenzie Crowne

Like many authors, I write what I know and I have solid ideas about what makes a hero. At the top of my list of hero characteristics is strength, or perhaps a better word would be toughness. Not that that trait doesn’t have its drawbacks. Believe me, it’s not always comfortable to be attracted to a tough guy. I know this because I will have been married to one for 34 years next week, but hey, tough guys do it for me.

If my father were still alive, he’d tell you he always knew I’d marry one. I know this because he told me so as we waited in the vestibule of that church 34 years ago just before Dad walked me down the isle. He wasn't a tough guy by anyone's standards, but he was a strong man, witnessed by the day he picked up a baseball bat and attempted to track down the guy who attacked me in a town park when I was thirteen. Thank God we didn't find him that day, because I have no doubt my fun-loving father, who never lifted a violent hand, would have crushed the cretin’s skull for preying on his little girl if we had.

That’s what strong men do. They act when action is required and they fight for those they love. It’s in their genes. Some women like their men that way. It’s in their genes. I’m one of them. As a strong woman who knows her worth, I need a strong man who won’t crumble beneath my confidence. I appreciate a man who sees my feminine confidence as a strength rather than a symptom of PMS. And I like a man who is willing to go after something he wants, especially when that something is me. I like a man who is willing to stand up for what he believes. A man who speaks his mind and is willing to die for me, even if I don’t deserve it.

The man I’m describing has faults, as do I. He gets angry, like me, but when the dust settles, he apologizes if he’s in the wrong. Sure, he has definite beliefs and isn’t afraid to voice them, but he also listens. He’s a guy. He’s quite often wrong, but he’ll never let you down when you really need him. That’s the man I married. Not perfect, certainly, but dependable as a Timex. I’d trust him with my life, and do.

I write what I know and because I want my heroines as happy as I have been all these years, I give them similar heroes. Unfortunately, an occasional reviewer disagrees. I recall one who trashed one of my heroes as a scary violent guy because he was pissed at the heroine and said so. Mind you, I don’t do violence in my romances, so I can't help wondering what this particular reviewer’s perfect hero looks like. For that matter, what type of men is she dealing with in her life? Are they so perfect, or docile, they never have a moment of anger? If so, she should probably watch out. Either they’re in love with their sister, haven’t come out of the closet yet, or they’re conning her royally. I have yet to meet a man, or woman for that matter, who doesn’t lash out in anger in times of conflict, and if you’re reading a romance…hello, conflict is essential.

The truth is, as in real life, no hero or heroine is perfect, but we all have our tastes. What qualities are necessary in your perfect hero and are there ever deal-breaker traits that make you toss the book aside, or worse, trash the book in a review? 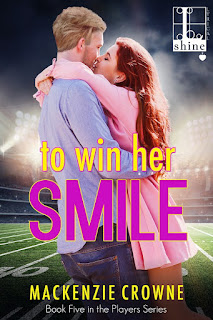 When Mac isn’t hissing at stupid reviewers, she spends her time weaving HEAs for her tough guy heroes and their ladies, like Wyatt and Piper, the hero and heroine of To Win Her Smile, the last in her Players series from Kensington releasing 7/18/17

Posted by Mackenzie Crowne at 4:30 AM

I like tough guys, too, Mac. I love how you described your perfect hero. That loyal, have-your-back thing is my hubby perfectly. I think your reviewer was way off. Expressing anger is human, and in a romance relationship, it's a signal of all sorts of things that show how much he cares--could be hurt, could be worry for the heroine. I think you got it spot on. If there is a deal breaker for me, it would be a "hero" who doesn't show he cares. What kind of romance would that be?

The 'who's got my six?' question is on my mind because I just read a Suzanne Brockmann SEAL-centered book. I think all of us want/hope for family and friends to stand by us, even in the worst of circumstances. In hero or heroine, unflinching loyalty is a trait I look for. In reality, I think it's rare...and maybe that's why it's such a compelling feature in a romance novel. If I can't find a character in a novel who cares deeply (or learns the trait in the course of events), the book isn't for me.

I like a strong hero with control. Instead of lashing out, he walks away and blows off steam in a different way...like hitting a punching bag or exercising/running until he expends his anger. In RL, I hate confrontation, even though sometimes it's necessary. In my stories, there has to be conflict. My strong heroines have to have a strong hero who keeps up with her and always has her back.

Well, Mac, we could have been twins separated at birth. You described my guy perfectly. Fifty years this March! As for the review, I got a similar comment for my hero who dealt with PTSD. Again, hello? Best of luck on the Players series! Have fun with the writing. It's the only way to go!

My husband and I are both Type A. We don't hesitate to express our opinions...loudly. I love the Internet because now I can push a few keys and PROVE I'm right! LOL I've always been attracted to strong-willed guys. Are they harder to live with? Probably. But who wants a yes man? I had one reviewer trash my heroes in the Wilde series (especially Sawyer in the 2nd book--she called him a douchebag!) because they weren't more willing to compromise. That bugged me because they did compromise in the end (to some extent) but they knew what they wanted and were strong enough to know changing their lifestyles completely would make them miserable. I also wondered what she wanted in a hero. A doormat? Or did she just want zero conflict? Uh, there isn't a story without conflict!! Great post, Mac!

You hit the nail right on the head, ladies. In real life, that "I've got your six" element is the foundation of being loved, whether that love be romantic, parental or friendship. In romance fiction, it's the unspoken element that drives both the characters and the story line. As a rule, negative reviews don't bother me, unless they are flat out nastiness from trolls. Then I want to take out a hit. :-) This reviewer's visceral reaction to the way the hero handled his frustration and fear simply made me think, and reminded me we all see things differently at times.

Great post, Mac. Like you, I can't imagine the interest there'd be in writing pussycat heroes and heroines--and it's wonderful to live cathartically and get all my anger out on the page!

Margo, the fact I haven't killed my husband in 34 years is a source of wonder for me, so I'm sending big time virtual high fives that you've pulled it off for 50. ;-)

LMAO Jannine. Hubs and I don't argue often, mostly because like Diane, I hate confrontation, but when we do, it's loud and energetic. Most of the time, I let him blow off steam, THEN present him with the proof of why he's wrong. And I also use the internet.... You might have seen my occasional FB post "He ran into my knife. He ran into my knife ten times." I've found that posting those 12 little words is a great alternative to searching out a hit man. ;-)

Exactly, Andrea. Hell, this is fiction and I write the kind of stories I like to read. I know not everyone is going to love them, but I'm sure there are stories out there for those looking for metro-sexual heroes.

I put a little of my Calvin in every hero I write. Cal is gentle, humorous, and laid back but I am his most cherished thing/person. He shows me in so many ways. Often in little, sweet demonstrations. Sometimes in grand romantic declarations. No one can measure up to this imperfect man. He's my hero. So I stick part of him in all my fiction heroes. Conflict and all.

Happy anniversary, Mac! OG and I celebrated our 34th last month. Like Vonnie, I always put a little of OG in my heroes. He's witty, funny, and above all--very, VERY smart. He also thinks of me in everything--every choice, every decision. That's not to say he hasn't put me through the wringer over the years, but I always had faith in him, and I think that's critical to making a relationship last.

Love this post...very well said. I also like tough guys. I don't have a tough guy, or any guy, in my life. But if I did have a guy, I wouldn't want a pushover. It's funny, I'm a bit of a pushover, but I never was when it came to relationships, or my marriage. I didn't tolerate any nonsense. :) No matter what, you are going to get criticism from reviewers. I don't have a problem with a hero or heroine getting angry at one another and showing it. I HATE it when the heroine slaps the hero, though. So many authors, and perhaps readers, think that's okay, but it really ticks me off. What if our heroes slapped our heroines? (Maybe that's off-topic, but anyway...). Your books sound awesomse, as does your real life hero! Congrats to you both. (I could only survive 12 years, and that was about 12 longer than I wanted to. :))

Great post and since I'm days late, enjoyed reading all the comments, too.