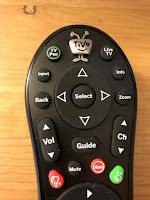 Last Friday, RCN, my cable provider, decided in its wisdom to bestow TiVo on me at a cheaper rate than my previous deal with them. It has a happy little smiling TiVo man on the remote and can grab emails and photos off my computer.
Something to watch at last.

And please watch out for the sequel to Come Love a Cowboy, coming out in June.  In the meantime, you can purchase Book 1 at https://www.amazon.com/Come-Love-Cowboy-Kathleen-Ball-ebook/dp/B01D5876UK/
And learn more about me at :  http://andreadowning.com

Thank you for my first laugh of the day, Andi! You sure picked some interesting shows to view. I've never seen most of them...except for Jeopardy, of course. :-) (I had to look up the answer to your Final Jeopardy (major-grossing) Question...and shame on me, I remember seeing clips of that show when I was a kid and should have remembered!) I think my favorite though has to be the 1,000 Ways to Die. Wow.

Wow is right! You know what they say about truth being stranger than fiction. It's amazing what passes as entertainment these days. An avid news only person, I will say I'm intrigued by your list in an I have to find out for myself kind of way. Thanks for the first installment of my daily dose of entertainment and the enlightenment.

Andi, thanks for the trip down TV lane. You hit on some new ones (Lots about dying, hm?) and some oldies. American Pickers is one of my husband's favorites; I'm aware of Jeapordy...all the rest are new to me. Just so you know, people are being dropped off naked on islands, and people are being dropped off in the wilds of Alaska to try to survive, and people are going out in the cold in rough seas to catch crab, on and on! The photographers have the tough job in these shows. (What's up with modern-day people yearning for hard-scrabble days of yore?) My point: the places TV goes today...mind-boggling. In 20 years? Oh boy are we up for some doozies. Stay tuned.

Other than Jeopardy (which I've watched since Art Fleming was the host), I've never seen any of the shows you watched. You missed some really good (IMO) shows. Too bad you ruled out British shows on Masterpiece. We tend to watch mystery/cop shows a lot: NCIS (and all its spinoffs), Murdoch Mysteries (out of Canada), Code Black. Can't wait for Starz's Outlander. Good luck with your new release.

I watch Jeopardy! regularly. It's always a bit of a rush when you know the answer and the contestants don't. And I like American Pickers, but then I like history and old stuff. I've told my husband to change the channel off Swamp People a time or two. If they can't speak in grammatically correct sentences, I'm not watching it! Fun post.

I thought we needed some laughter here with all that's been going on.

Leah, I only knew the answer to that question because it was actually the very first Broadway show my parents took me to see here in NYC--stays with you.

Margo, if you do follow suit I'll be interested to hear what you're able to trawl up from our 1000 channels!

Rolynn, it does amaze me what goes on tv. We've become Romans watching the gladiators. People are supposed to do just about everything in front of the camera, incl. die--that actually happened on a British show which followed a girl through the final stages of her illness. Disgusting really.

Diane, I had to rule out Masterpiece since most of them are British-made---so I knew they'd be good! Enjoy them.

Jannine, it does amuse me no end when we need subtitles to understand people who are supposedly speaking English. Okay, so some accents are just too thick. Glad you enjoyed the post.

I saved reading your post to the last of checking email, which, for reasons I won't go into, sent my morning spiraling downward. After your post, I'm back up and ready to tackle my day. I read to the end. Thanks!

Yes, Andrea, TV has become a wasteland. I used to watch the news more, but now that's scary! I watch documentaries, occasional PBS show, not too many movies unless they're old and I've probably already seen them, and ... not a lot else. TV is really sad, these days.

We watch PBS and Netflix. Calvin and I chuckled over your post. Well done. Thanks!

Brenda, so pleased to have been of service! I think we all ned a good chuckle to start the day.

Hebby, weren't we better off in 'the old days'? I remember growing up with 7 channels, and I did a lot more watching than I do now!

Vonnie, thank you so much for stopping by today and I'm glad to have given you both a laugh. Wishing Calvin well and a speedy recovery.

Andi, you made me laugh! My favorite line: "Apparently there is not enough history to occupy the channel" because if you ever saw me watching TV, you'd hear me frequently shout while waving my arms around, "Where is the history on the History Channel!" It used to be my fall-back station. We continue to record and watch shows which use scientific equipment to find lost or mythical things like Monsterquest or The Curse of Oak Island where they're attempting to find the money pit which has already taken 7 lives or something. I wonder why when if they did find the Loch Ness Monster, for instance, I don't think we'd have to wait a week to found out on Monsterquest.

Patti, thanks for the laugh--and you're so right. Finding the Loch Ness Monster would make the evening news! Now I'm rather sorry I missed those programmes but---1000 channels! There ya go.

A clear list of reasons I don't watch TV. Thanks for the laugh.

Oh wow, fun post, but these are NOT my shows. :) I do love tv, though, but mainly sitcomes and The Walking Dead.