My Daughter Is a MOB by Betsy Ashton

You read that right. My daughter is a MOB. She's not in a mob. She's a Mother Of Boys. This woman, who as a child loved tea parties, playing the piano, and dancing, both ballet and jazz, who loved all things "girlie," gave birth to two boys. And what little boys they are. 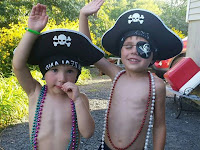 The older boy Howie is now five and a half. He loves to run, yell in the house, and play with any toys that make noise. He also likes to color in his mother's coloring book. Inside the lines with a really good sense of what colors go together. He loves being a big brother.

The younger boy Cal loves trucks, motorcycles, running in the house, and playing with toys that make noise. Much of his quiet time is when he's asleep. When he's awake, he's always on. When he's focused on something of interest, forget about getting his attention.

Yes, my daughter's house is alive with the noise only boys can make. And she loves it. She's right at home in chaos.

Before you ask, the boys know the difference between indoor and outdoor voices. They can be quiet when they need to. They are young enough to like listening to stories at bedtime. Howie is learning to read in kindergarten. Well, he started kindergarten being able to read a lot of words. Both have solid vocabularies for their ages.

Howie is a runner like his mother and father. Dad is training for a 100K race. (You read that right.) Mom and Dad have run and finished a 50K already. And Howie has already finished his first 1K race. He ran most of the way, only had to walk a little. No one is sure Cal will be a runner, but he does like racing around the house. 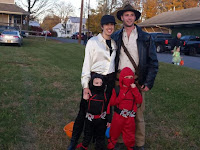 This is a family that likes to do things together. Like Halloween, when they all dress up in themes. Star Wars one year; Indiana Jones with ninjas another. No pretty tutus.

I once asked my daughter if she'd thought about a third child. While she'd still love that girl, she said her husband reminded her that he's in the driver's seat when it comes to the sex of the fetus. She'd have another boy.

Can you tell I love them very much? Can you tell I can be an insufferable bore when it comes to the boys? Can you tell I'm glad we live 500 miles away and aren't around the yelling all the time? We get to be the Disney grandparents who drop in periodically and go home when the boys get messy.

I'm done for now. Got the bragging out of the way. Hope you didn't mind.

Betsy Ashton is the author of the Mad Max mystery series, Mad Max Unintended Consequences and Uncharted Territory. Her work has appeared in several anthologies including Reflections  on Smith Mountain Lake, Voices from Smith Mountain Lake, and Candles of Hope. Some of her essays and poems have been featured on NPR.

Loved the bragging, Betsy. Seems like your daughter is a great mom and you get to do all the grandmothering you want to. Thanks for the pictures...showing the boys using their imaginations to the hilt. More writers and astronauts...here they come!

Cute pictures. My sister-in-law had two boys and went for a third. You got it--another boy. I enjoyed reading about your family.

As one bragging grandma to another, I loved this post. If they're running and yelling, they are healthy.

Terrific post. Brag all you want, Betsy. Grandmothers get to do that. I never thought I'd have so much fun with the kiddies. Right now, I'm enjoying the last 3 days with the youngest. I'm going to hate going home on Thursday.

What a fun post, Betsy! I too am a MOB, after growing up with no father or grandfather or uncles or brothers (or any males) in my life as a child. What a culture shock! I have very clear recollections much like you described. :-) Enjoy your boys!

Grandmas are supposed to brag. It's what we do, right? Great post. Those boys are adorable.

Those boys are adorable! Brag all you want!! Thanks for sharing the photos!!!

Bragging is just what being a grandparent is all about. I have two siblings and we each had one child...all boys. When my son had a daughter, it was wow! A girl in the family. And she's so much fun.

Brag away! Actually, I'm jealous. I'm just about to go through the wedding in May--grandkids yet to come.

Awww, lovely post! What a great family. I don't blame you for being proud. Boys are soooo wonderful!! Enjoy them. :)