LOST IN AIX (Part 3 of 3) by Rolynn Anderson

The story of the cowgirl and the external drive thrilled his grand-mère on Christmas Day, as Paul knew it would.  But he was surprised when she said, “Now you will find her.”  The wrinkles on her face deepened with her determined look and she shook her stubby index finger in the air when she spoke.  Hoisting herself off her chair, she grabbed an apron and tied it around her ample waist.  Her brown eyes, clear and piercing as a thirty year-old’s, demanded action from Beau.  She got busy in the kitchen and served the big meal early, determined he should catch the five o’clock train to Aix.  Paul considered attaching the data drive to his computer, to find out more about its owner, but rejected the idea.  If it’s not hers, I’ll turn it in to the train company.

Together, speaking English, although Grand-mère peppered hers with French, the two hopeful romantics debated ways for Paul to find the woman with the hat.

“Elle est belle.  She is beautiful,” she said, hands clasped.

“What kind of an answer is that?  Of course she is or your eyes would not have caught hers.”

“Her blonde hair goes to her shoulders.  Green eyes, I think.  Pretty, bright eyes.  Nice smile.  Good posture.  Slim, but not too.  Traveling light.  Maybe from America.  California or the Southwest.”  He sighed.  “These last are guesses.”

“Parfait!” Grand-mère said, squeezing Paul’s hand.  “But how will you find her?”

“I know tourists,” he said, finally feeling on solid ground.

“She is lucky you of all people took her seat and found her lost records.”

“I have helped at least a dozen clients take action after they left something on the train.”

“How many hours must she take to fix the problems?”

“Talking to people, changing passwords, filing a lost item report, and all the worry and thinking that goes along.  Maybe four hours of work and distress.”

“She will be upset, our girl with the hat, no?” At the thought, Grand-mère moaned.

Paul pinched the skin on his forehead.  “That’s the issue.  She may be the type to sit and fret in a hotel room and there are too many hotels in Aix for me to check.”  He waved a hand in frustration.  “Imagine me going to every hotel reception desk asking for the blond girl in the cowboy hat.  They’d laugh me out each door.”

“Our girl is not the kind that draws into herself,” Grand-mère said with certainty.

Paul shook his head.  “For dinner, she’ll order food and a bottle of wine to be sent to her room because she’s unhappy.  This way she denies herself the pleasure of others’ company, or any sense of enjoyment.”

Grand-mère made a noise of disgust.  “She will not punish herself; you would not, either.”

Paul wondered if she was right.  He’d spent the last two years allowing people to come to him; was he capable of searching out someone for himself?

“She will not be very hungry, because of all the stomach aching.”

“True.  Maybe a small meal and some wine.”

“Yes, although she is a moderate drinker.”  Grand-mère lifted Paul’s half full wine glass.  “Like you.”

“You’d think she’d eat downstairs in her hotel,” he said.  “But I’ll still have too many places to check.  Fifty hotels around the Cours, alone, Grand-mère.  And she wouldn’t wear her hat in a restaurant; how could I spot her without it?”

Grand-mère put on her feisty face.  “These are problems, but my bright grandson will solve them all because he understands these tourists.  Finish eating.  Aller!  You call me when you find her.”

Paul began his search at 6:00 p.m. west of the Place De Gaulle, the giant fountain at the foot of Cours Mirabeau.  He walked each side of Avenues Victor Hugo, Belges and Bonaparte, peeking into every hotel restaurant.  He constantly questioned his behavior, and feelings of foolishness overwhelmed him often, but his Grand-mère’s optimism pushed him on.

Finally he remembered a few small hotels on the north side of the Cours.  Could she be staying in one of little ones without restaurants attached?  The idea and a quick glance at the time robbed him of energy and hope.  It’s nine o’clock.  She’s gone to bed, exhausted by her loss and jet lag.  I’ll never find her.

He came to a halt at the moss-covered fountain in the middle of the Cours Mirabeau, decorated with hundreds of tiny white lights.  He heard Jingle Bells playing which jogged his memory of his first view of the woman on the train.  In two years of guiding, I’ve never had a tourist wear a hat like that, which means I’ve pegged her incorrectly.

Where would my girl go?  Where renegades go, like Cezanne, whose challenge to perspective upset the art world.

He turned a one-eighty, to Cezanne’s favorite, Les Deux Garçons, and looked straight into her wide eyes.

He pulled the hard drive out of his pocket and held it toward her, the cord dangling below his hand.  “Is this yours?”

Whipping the hat off her head, she stood, slapped it against her leg and yelled, “Yee haw!”

As she grasped the metal treasure to her heart and motioned for Paul to sit down, he pulled his phone out of his pocket.  “Your name?”

“With a name like that, you definitely picked the right place to hang out.  My name is Paul.  Pardon me while I call my Grand-mère.”

Her green eyes opened wide again, but she gestured with the hard drive for him to go ahead.

“I found her.”  He paused, grinning at his grand-mère’s exclamations of joy.  “And you were right about her personality, her beauty, and her good taste.  The first words out of her mouth were to compliment the sweater you made for me.”

He punched the phone to end the call.  Aline’s smile gleamed along with her gold hatband and Paul swore he heard a chuckle coming from Cezanne’s favorite table.  Happiness bloomed in his chest so he couldn't speak; instead Paul reached for Aline's hand.  Warm, elegant, strong.  Cradling her hand between his, he said, “Merry Christmas to us.”

****
Dear Readers: Thanks for reading my story and for supporting the work of our Roses of Prose authors.  We enjoy giving the gift of words every holiday; we hope we've warmed your hearts this season.  I'll e-mail the winner of my giveaway...thanks to all for participating.

I am pleased to announce my release of FAINT, third in the funeral planner suspense series, now out in all formats.  I can't wait for you to catch up on Jan, Roman, Trudy and Pete, and of course, Elly the little Scottie.  This group can't seem to keep out of trouble, can they?

A dead client goes missing, and investigating his disappearance forces Trudy and Pete to confront their fiercely independent styles.  When danger stalks them, will they blend brains, brawn and belief in one another to solve crimes and save themselves? 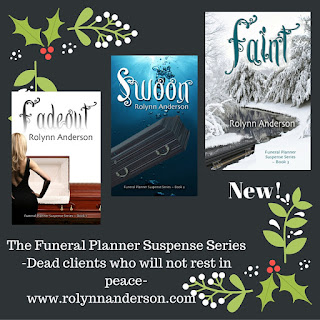 Terrific finale, Rolynn! What a great story to end our Christmas series.

What Jannine said. Terrific. Merry Chritmas to them and everyone. Nice work.

And they and the Rudolph sweater lived happily ever after. Great story with an awesome ending.

Thanks Jannine, Margo and Vonnie. I've learned that short stories are challenging to write...hell, I was tinkering with the ending for an hour last night. But so satisfying to please readers!

I loved the ending. It was perfect, and believable. And I loved Grand-mere.

I love Grand=mere, too. :-) Terrific ending, Rolynn. Thanks to you and the others for this year's fabulous holiday stories.

Darkwriter, Alicia and Leah: Thank you for your kind comments about the ending and about Grand-mere. Aline will be important in my next novel. Paul might, too. Just you wait :-) Happy New Year! Rolynn

Loved your characters. Good to hear they move into more pages!

Perfect ending, Rolynn. And a great ending to a month of short stories. I've loved reading each one of them.

Cool! My story is still up! Thanks to Brenda and Diane for your kind words. Writing short was a long stretch for me, but I loved the challenge. In my blog entry on the first, I'll talk to you about another stretch I might want to take on. Stay tuned. Happy New Year!