Doggie Kisses and Mistletoe by Barbara Edwards
Chapter One

A ringing phone at two in the morning never brought good news. Laurie pulled the pillow over her head. The trilling stopped for a minute and restarted in the time it took someone to dial.
She sighed and lifted the phone hoping it wasn’t an emergency. Her father was spending the night at the hospital with her mom so it couldn't him.
“Hello,” she mumbled, rubbing the sleep from her eyes.
“Hey, Sis, did I wake you?” Laurie snapped upright.
“Ben? Of course you did. Are you okay?” Her brother was on a tour of duty overseas, a constant worry for the family.
His deep laugh boomed over the speaker. “You always ask that. I didn’t realize how late it is. I need a favor.”
“What?” she scrambled to pull up the covers. A glance out her partly open bedroom window revealed falling snow. That explained the chill. The promised white Christmas was arriving early.
“I wanted to surprise our parents. I’m at the airport. Can you come and get me?”
Laurie swallowed the lump in her throat. “You’re home? Here?” Happy tears filled her eyes.
“Can you borrow Dad’s van? I have some extra baggage.” He laughed.
“Of course. You know I’ve been staying at their house, keeping an eye on things.” she checked the time. “I can be there in half an hour. No, make it forty-five minutes. I have to dress.”
“I’ll be at the baggage pick-up,” he added before he disconnected.
Laurie dressed quickly and drove through the deepening snow to Bradley Field. At this time of night, the highway was empty and she made good time.
She followed the signs to the baggage claim, peering through the windshield. She spotted Ben in his uniform outside the doors. Her heart dropped. He was balancing on crutches, one leg in a cast. She pulled to the curb. Jumping out, she flung herself into his arms. He smelled cold, sweaty and like her brother, all rolled into one.
“Hey, hey, don’t cry. I hate it when you cry.” He awkwardly patted her back.
“I’m not,” she sniffed and wiped her nose. “What happened? You’re not okay. I can see you’re hurt.”
“Not so bad. Just enough to get me a ride home for the holidays.”
She pushed free and gave him a once-over. Darkly tanned from the desert sun, his handsome face looked tired. His shoulders sagged, but she wasn’t sure if he was in pain or weary.
“Where are your bags?”
“Right here,” a male voice said.
In her excitement Laurie hadn’t noticed the other soldier standing behind Ben. She instantly recognized Ben’s buddy, Jake, from the photos he’d sent home. When he pulled her close her pulse stuttered. He was much more impressive in person. His arm was in a sling. He’d been wounded, too. Her heart went out to him.
His cool lips sent a shaft of heat through her body. His mouth felt perfect. When his kiss was joined by a doggie tongue on her cheek, she laughed and pulled free. The Belgian Malinois gave her a wide dog smile.
Jake nodded at several duffel bags, taped boxes and the large dog prancing around them.
“Jake and Diesel are spending the holidays with us. I know Mom has room for a guest.”
Laurie nodded dreamily. Jake wasn’t handsome like Ben, but his dark eyes, high cheekbones and square chin made him strongly attractive. She unlocked the doors and  shoved their gear inside with Jake’s one-handed help.  Diesel jumped in the back at a command from Jake. She helped Ben settle in the passenger’s seat after adjusting the seat all that way back.
“Mom didn’t have a clue. She’ll be so surprised. And Dad. We’re bringing her home from rehab this morning. She’s been so impatient since she broke her hip,” Laurie babbled, too excited to stay silent. She pulled onto the highway. The falling snow draped a white curtain over the trees.
She glanced in the rear-view mirror. Jake had his good arm slung over Diesel’s back. Diesel panted as the heat kicked on.
“And you, Jake? Are you going to visit family?”
“No, ma’am. I’m supposed to drop off Diesel at Lackland Air Force Base. He’s being discharged. I’m trying to adopt him since he’s been my dog for four years.”
“That’s wonderful. He looks like a nice dog.” Diesel  seemed to understand her compliment and exposed his teeth in a doggy grin. 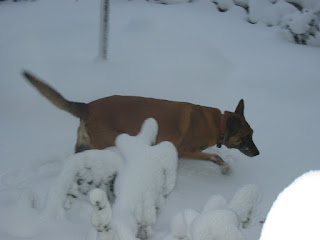 Christmas Eve morning the sun glistening on the fresh snow roused her from a dream of soft embraces, searching kisses with a man who looked like Jake. Her skin felt hot as she recalled the details. She didn’t even know him.
Through the opened window she could hear someone talking followed by a sharp bark. Pulling on her robe, she leaned close to the frosted glass. She had a clear view of their fenced backyard. Diesel leaped high to catch a snowball then ran in a tight circle, kicking up the loose snow.
Jake called to him and he dropped. Fascinated, Laurie watched as Jake put Diesel through a series of exercises. He knew more than heel, stay, down, fetch. He jumped over the fence on command and returned. He searched along the fence line for something Jake had concealed. Laurie shook her head. He was a great dog, but she needed a cup of coffee.
Tightening the tie of her robe she went downstairs to the kitchen. If Ben had been awake, the coffee would be ready.  Strong enough to blister paint.
Thankful, she made a pot herself. Thinking about Jake outside in the cold, she poured a cup for him and took it to the door.
She hesitated when she saw him sitting on the back step. His arm was around Diesel. The dog nuzzled his chin when Jake’s head bent and his shoulders shook. Laurie realized he was crying.


Her heart cracked as she stepped back to allow him privacy. He didn’t want to give up the dog that had saved his life numerous times, but he was a soldier who did his duty. Laurie resolved to make this Christmas the best ever for Jake. He’d have happy memories of these few days with his dog, she vowed.

Come back tomorrow for Chapter Two

Nice beginning, Barb. You have me tearing up too. Jake and Diesel deserve the very, very best!

Gosh, wounded warriors and a brave dog...way to start with 'moving' parts, Barb. Nice suspenseful elements, too. You grabbed this reader! Thanks!

Great beginning! Wounded heroes and a hero dog, plus a hint of romance. Heart wrenching. Looking forward to more!

Hi Margo,
Thanks for the compliment. Merry Christmas

Hi Brenda,
I love dogs. And out soldiers. Merry Christmas

Hi Rolynn,
Thanks for the nice words. Made me smile.
Merry Christmas

Hi Alicia,
Thanks for the nice compliment.
Merry Christmas

Aw gee, another dog tear-jerker, like Dixie's Gift. I'd better stock up on Kleenexes. This is going to be a good one!

A guy and his dog. Not much more needed. ;) Thanks for sharing!