I just spent my weekend at the Nevada High School Track and Field State Championships in Las Vegas watching our North Tahoe Lakers compete. And it got me to thinking. I know, dangerous, but bear with me. My oldest daughter is a senior. It's been a year of lasts for her. Next year will be a year of firsts. But this was her final chance to win a state championship in track. She's had a lot of victories over the last four years, but no gold at state.

The meet began with the boys 4 X 800 relay. The first three boys on our team gave our anchor leg a fighting chance. James, a senior, took the baton and poured his heart into running the race of his life, coming from behind. It was dead even at the finish line, and everyone held their breath to hear the announcer. Our boys won by four thousandths of a second! Can't get much closer than that. The same thing happened in the girls 4 X 100 and 4 X 200 races. The first three girls ran hard, gave the baton to Ally, a senior, and she ran faster than I've ever seen her run from behind to squeak out a victory at the line. I'd have to say there's something about being a senior, knowing it's your last race, that pushes you past your limits to succeed. 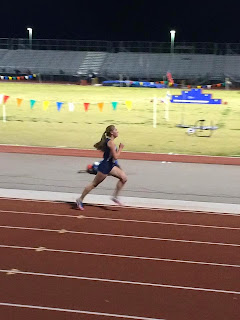 So, back to Tara. She's a distance runner, and the 800 is not her race. She gave it her best shot, though, and ran a PR and got the bronze medal. In the 1600 she had a chance at victory. She ran a PR, but the girl she was running against was also a senior. She took the gold, and Tara got the silver. The 3200 was the final race of the night on Friday. The stands were mostly empty by 9:30 when the gun went off. Tara started fast with her main competitor running side by side with her for the first three laps. On the fourth lap, Tara sped up and started pulling away. Her pace was fast, and she had four and a half more laps to go. We help our breaths, hoping she wouldn't burn out before the finish. She didn't. She ran the race of her life, a huge PR, and won the race by a long margin--getting that coveted gold. Three PRs and a trifecta of medals. Not a bad way to end a high school running career.

So, how can we apply this senior drive to our every day lives? As writers, do we put our best work forward every time we sit down at the computer? Or are we too busy thinking about the next book to focus on achieving our absolute best with each word we write? In our personal lives, do we get the most out of our day, living it like it was our last? Or are we just marking time? Maybe we can't have that burning drive each day. Maybe it simply isn't possible. But from now on, I'm going to try a little harder to make each book I write my very best. To enjoy the moments in life that I don't always stop to appreciate. That's what I took away from this weekend.

Maybe good things do come in threes. I hope so with my new series. Every Move She Makes is available now, on sale for only 99 cents. Every Step She Takes can be pre-ordered now and releases in July. Every Vow She Breaks will round out my series early in 2016.

Email ThisBlogThis!Share to TwitterShare to FacebookShare to Pinterest
Labels: Every Move She Makes, Every Step She Takes, Jannine Gallant, NIAA State Championship, The Roses of Prose Where Romance is Never Out of Season, track and field

You're right. Great way to finish with a gold. Great job, Tara. So happy for you with your own trio of successes, Jannine. May there be many more to come. I KNOW you've got them in you.

Congratulations to Tara--I wish her happy in both her lasts and her firsts.

I remember telling my kids that the most important thing to me (in sports, which they were in a LOT of) was that they have a good time. I may have not stressed giving it your best enough--though I think they did--but I wanted them to have fun. And I must admit that's carried over to my writing, too--it must be a good time.

Happy writing to you, Jannine! I love your posts.

Thanks, Margo. I hope I have a lot more "best" books in me!

Liz, you're right about the having fun part. But, I've noticed when the kids try their very hardest, they come away from a meet the happiest. So I think the giving it your best and having fun go hand in hand. Thanks for stopping by!

Good points, Jannine. And Yay! to Tara. You know, novel-writing is tricky for me. I try something new with each one...I think I'm doing my best, but because I'm taking a new approach, it's like starting all over. I'm in it for the long run, but it's a new sport, every time!

Your approach must keep the process fresh and interesting, Rolynn. I'm having enough trouble mastering one path!

Congratulations to Tara for a fantastic wrap-up to senior year! We had my nephew here for the weekend as he headed home after his freshman year at Cal. I hope next year is as wonderful a growth experience for Tara. As to writing, I'm guilty of every bad habit you described. LOL. I really must do better.

I think we're all a little guilty, Alison. I know I am! Bet your nephew had a fun weekend with you. Go Cal!

Congrats to Tara. What a great finale for her last year in h.s. Your connection to writing is very appropos. I frequently think that my current book may be my last, partly because of age (is that morbid or what?) but also we never know what life has in store for us. I could get Alzheimer's like my mom or I could get hit by a bus crossing the street. Either way, I want my "last" book to be my best. Thanks for the reminder to do my best.

Congratulations to Tara.
I hope we all learned a lesson to try our hardest. I realized this week that I had lowered my goals without knowing it. someone asked me why I wasn't pubbed with NY. I had put side this goal and forgot to go back. Now I plan to. I'm going to the conference and talking to two old acquaintances about going forward.

Glad my post (and the track team's performance) gave you a positive nudge to keep striving toward your goals. Thanks for leaving your thoughts!

Proud of Tara in her monumental achievement. Nothing more exciting than a race in which we know and love a runner! As for writing--nice metaphor: Keep up the pace and sweat out the endurance.Hope for the gold! Nice post. Thanks.

Congrats to Tara. Nice post. And you're 100% correct. Wouldn't it be wonderful if everyone gave their very best to everything he/she did?

Thanks for stopping by, Judy. Imagine the possibilities with that attitude. Of course we'd probably all drop with mental exhaustion!

Congratulations to Tara! I would have been jumping up and down and screaming my head off. And holding my breath. And possibly passing out. :-)

I'm afraid I too often get stuck in the sameness of my days, failing to recognize that each is unique and has its own goals (finish line) to strive for.

Thank you for the kick in the pants, Jannine. I needed it.

You're welcome, Leah. We all need something to jolt us out of that "sameness" every once in a while!