Since here at the Roses of Prose we're having a subject matter free for all, this is another short story I wrote many years ago I'd like to share. 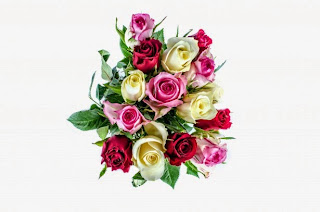 ﻿
Better All The Time

“Josh sent me these!” My co-worker, Linda, rushed into my office, a bouquet of roses held proudly before her. “Aren’t they beautiful?”


Breath in my throat, words failed me. John had bought me roses our last anniversary together. I shook off the bittersweet memories and forced myself to smile. Soon, I began to feel its warmth.


“They are beautiful, and Josh is beautiful for sending them to you.”


Closing my eyes, I sat back in the chair. John had been gone for two years now, yet widowhood still seemed new. ‘Just hang in there,’ well meaning friends would say. ‘You’ll see. Things will get better.’


I was still waiting.


I’d quit college to marry John twenty years before and just shy of earning my degree. Now, with time on my hands – or was it a void to fill – I had enrolled at the university in our town and was determined to graduate. Even if it meant taking night classes.
When five o’clock rolled around, I put the file I’d been working on in the bottom drawer of my desk and grabbed my coat. The campus was only a short drive across town, but rush hour traffic would make the trip take longer.
Spring was struggling to displace the cold of winter. I was beginning to resent the chilly five block walk from the commuter lot to the math building and my class. Head down, my thoughts drifted to Linda and her wide open future with Josh. Ah, the thrill of new love and all its promise. I smiled, and for a moment remembered those feelings myself. Until a passing car, horn blaring, jerked away the thought. I guess daydreams of romance are for youngsters. Suddenly embarrassed, I burrowed deeper into the collar of my jacket as a wicked blast of cold wind hit.


“Some people are just rude.” A masculine voice spoke from beside me. I peeked over at its source, into twinkling blue eyes and a warm, friendly smile.


Just as quickly as he appeared, my good natured stranger was swallowed up by a crowd of students. Once more I was alone.


Arriving at class, I took my usual place at a table toward the back and began to study my notes. The instructor was known for giving pop quizzes and I wanted to be ready. It wasn’t too long before someone set a notebook down then slid into the chair beside me, long legs spilling into the aisle. Another gangly teen-ager. Moving my books from what was now his side of the table, I stayed with my notes, then felt my new seat mate check out my worksheet.


“Those must be the formulas we’re supposed to learn. I read about them on the handout. Are they difficult?”


“They’re a little confusing.” I gave the answer without looking up.


“I missed the first couple of classes. Hope I can catch up. By the way, I’m Richard.” He extended his hand over my notebook. “Richard Carl.”


I lifted my eyes. The quick handshake broke my train of thought and my concentration soon followed. I immediately recognized the good natured smile I’d seen only moments before. Not to mention those twinkling blue eyes. Then, for the first time, I looked further to the silvery gray hair that framed a face that was just this side of handsome.


“Dina Marshall.” My hand felt warm in his. “Actually, I’m still trying to learn them myself.” Suddenly shy, I looked back at my notes.


“Maybe we could try to learn them together.”


After our brief study session, the formulas began to make sense. I wanted to let him know how much his help and his kindness meant to me. Our instructor walked in before I had a chance. The entire class, Richard and I included, turned obediently to the front of the room. I’d been right about the pop quiz, and an hour later, the test and the class were over. Without a word, Richard picked up my books as well as his own. We walked together out into the hallway, then stood facing each other in awkward silence until he spoke first.


“Actually, I’m widowed.” I said spoke softly, surprised to have given up that fact so easily.


“I’m sorry. That must be very difficult.”


“It’s been awhile. But, at times it feels as if it just happened. It didn’t seem odd to hear myself confiding in him. Something in his manner assured me that it was okay.


“I’m actually getting used to the single life again myself.” Now it was his turn to share. “Divorce.” He shrugged. “It was for the best.”


We continued on for a while in silence, having said all that needed to be said – for now.  Soon, though, we began comparing our answers to the test questions and, before I knew it, I was by my car.


“You too, Richard.”  I watched him turn away, then unlocked the door and climbed inside.


The next time I arrived on campus, the walk to class didn’t seem so long and dreary. I even noticed the early evening sun as it cascaded over the buildings, tingeing the pale blue sky with pink and red feathers of sunset. Richard was already there when I entered the classroom. Smiling, he indicated the seat beside him. A quick greeting was all we could manage as the instructor strode to the front of the room to announce another pop quiz. I was mildly surprised at my disappointment. It would have been nice if Richard and I could have had more time just for talking.


“That test was a little tough.” Richard made the comment as we prepared to leave. “How about coffee and some non-mathematical conversation? There’s a little café about a block away.”


I couldn’t hold in a wide smile. “That sounds wonderful.”


Those blue eyes sparkled. “I was hoping it would.”


As we walked, we talked about everything and nothing.


“Did you see that sky earlier, at sunset?” He looked down at me as he spoke. “The bright reds, vivid pinks.”


“Wasn’t it gorgeous?” My reply may have been a bit overly enthusiastic. It felt good to have shared something special with him, even though we hadn’t been together at the time.


“Cinnamon Hazelnut, flavor of the week.” Richard read the sign as we entered the coffee shop.  “That’s what I’m having.”


“Shall we indulge in doubles?” He gave me the most charming grin and a wink.


“Of course.” Once again, I returned his smile.


I wasn’t sure whether it was the offer or the man I couldn’t resist. Whatever it was that had set my heart to flutter.


Things were definitely getting better all the time.

My days to blog here are the 11th and 23rd. If you'd like to learn more about me and my stories, please visit me at my WEBSITE
Posted by Margo Hoornstra at 12:01 AM

I enjoyed the lovely story, Margo.

What a sweet, short story! I like the chill wind diverging into a pretty sunset--symbol of a quick change in life for Dina. Thanks!

Thank you, Dear. Since you've entertained me, glad I could return the favor.

Wow! Thanks for noticing, Susan. And for stopping by.

Terrific, sweet story, Margo. You do short very well. I enjoyed this immensely!

Love this, Margo! So she's going after her degree, possibly a new career, as well as a new love. Awesome.

Wow, what a wonderful story and a great way to start the week. Well done!

What, Jannine? No edits? Heh-Heh. Glad you enjoyed it.

Thanks, Patty. Nothing like a bright future ahead to make you smile.

Appreciate that, Alicia. Glad to help start your week on a high note.

What a lovely story. I wish I could do short as well as you.

Thanks, Diane. I had to write short those many years when I 'went corporate' and had very little time to write what I wanted.

Wow... Great way to meet someone! I loved the story!