Give me a complicated woman any time…

But what strikes me as most obvious is that we can’t expect that women of a certain age, although they certainly deserve love as much as anyone, will find it in the same way as someone just out of high school. Pop culture tends to glorify drinking and partying till participants aren’t really sure exactly who they’ve slept with or the seriousness of sex in the course of a sincere relationship (cite, for example, Katy Perry or Ke$ha, Rihanna and others).

Older women aren’t really interested in such behavior. They have different needs and different standards and are often in a very different place in their life than a 20-something. They may be financially secure and be looking just for someone to spend time with now and again. They may be desperately lonely and ready to take whoever shows up. All these motivations need to be taken into consideration by the author.

Women who have been through a bad break-up are often cautious about beginning again, not ready to hop into bed with the next Jason, Richard or Jean-Claude at first meeting. She may have had a wonderful husband, and be reluctant to replace those memories with someone’s warm arms to hold her. So these stories tend to be written with a little more character development—the reader wants to believe that the heroine really wants to be with the man of her dreams, and can tell if it happens too fast or too unbelievably.

This is where an author often runs into a conundrum. If we’re writing a romantic story, we naturally think it’s a romance. But editors look at the pacing and motivation of the story. A “romance” is often more superficial, dealing with the surface passions and emotions. A lonely woman finds a lonely man and they find they click sexually, healing them both. Historical romances or romantic suspense adds another layer of depth, as the characters are constrained by the intricacies of the plot to withhold their final satisfaction and love.

I’ve found that no matter how romantic the story, if the heroine has serious life lessons to learn, and a complicated path before she can allow herself to accept love, the author is often angling in the direction of women’s fiction. Women’s fiction does more to explore the development of your characters, watching them grow into whole people before they can fall in love with the person who’s waiting for them. Personally I find it more interesting both to write and to read. But that’s what’s nice about this field: there’s room for both schools of thought.

One romantic suspense, one women’s fiction novel, both with heroines who’ve seen some mileage but still have plenty of heat left in the engine.

The first and Second books of the Pittsburgh Lady Lawyer Series!

Come by the following blogs or live booksignings ON THE SCHEDULED DATES and leave a comment to be entered in a drawing—at the end of the tour, Alana will give away one ebook copy of each book and one paperback copy of each book—Four lucky winners!


The whole list of blog appearances is found at http://alanalorens.com --and this post is one of them. Leave a comment and take your chances of winning one of these books. 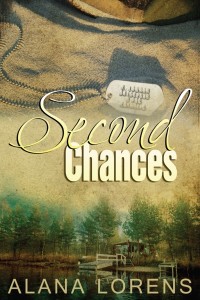 SECOND CHANCES: After ten years as an associate at a small Pittsburgh law firm, Inessa Regan gets a pink slip when the economy tanks. She’s never worked anywhere else, and her divorce many years before has left her insecure on her own. Her pride wounded, she flounders helplessly until her neighbor brings her a potential client, Kurtis Lowdon, a man 15 years younger than she, an War veteran with cancer.


Kurt helps her take the first steps back from the pit of despair, as she realizes that she hasn’t lost everything. She still has her legal skills, which she uses to draft Kurt’s living will and other papers. He offers her some rental space in the office from which he runs a small security business on the east side of the city; she reluctantly agrees.


At first, she’s obsessed with making money, wanting to feel secure, but as she and Kurt come to know each other and spend time together, she learns that money isn’t all she needs to feel fulfilled. Grateful for his intervention, she strives to repay his generosity by helping take care of him while he struggles with his cancer treatment and recovery. First as her client, then as her landlord, then as her partner, Kurt shows her the power of believing in oneself.


Their journey together is threatened by her struggle to become independent as well as by secrets from Kurt’s own past. Post-traumatic horrors of war have followed Kurt and his friends home from overseas and haunt their very steps. When Kurt’s cancer returns, she must realize that no matter how hard she holds on the the quickly-shredding edges of her life she could still lose it all. Can the lessons he’s taught her keep her strong enough to survive? How much will she risk to save him? 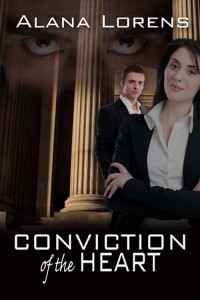 CONVICTION OF THE HEART: Romantic suspense novel CONVICTION OF THE HEART features attorney Suzanne Taylor, who raised her children as a single mother at the same time she built a successful legal practice. She’s managed to keep herself untangled from romance for many years, putting her kids and their financial security first.


But the case of a city councilman’s battered wife brings her complications in the form of police lieutenant Nick Sansone, whose interest in her comes right when she needs a little help from outside sources. The councilman strikes out at Suzanne, Nick, and eventually, anyone he can think of who might make Suzanne back off.


Will they be able to stave off the danger long enough for their love to blossom?

See the book trailer for this here: http://www.youtube.com/watch?v=a84IZoH-JKw

Some interesting insights. I, too, like women's fiction, and I think the line between it and romance blurs frequently. In my eyes, the romance is stronger when the woman is confident in herself. Best of luck with sales, Alana, and thanks for visiting us.

Love stories of older women with discoveries to be made. Insightful blog. Good luck with your book.

Thank you so much for hosting me, ladies! I see why so many love reading your columns.

Older women should have a place in romantic fiction. These two sound interesting. Best of luck with them.

Brenda Whiteside, you've been chosen as one of our winners for the blog tour! Please contact us at bmountjoy@zoominternet.net to claim your prize!