Roughly a month ago, I got a message from my nephew. He told me my sister was becoming more frail and wanted to see me. Could we come to Pennsylvania for her eighty-fifth birthday? Pauline is sixteen years older than I and I can't recall us ever having a cross word between us.

We've led two different lifestyles. She was a fulltime homemaker, who ran the sweeper between the mattress and box springs and canned her own fruit. I worked outside of the home, survived a divorce, and named all my dust bunnies. Even so, we were always affectionate.

Calvin and I thought of ways to reach her. Flying was out. Our local airport only flies south. We could go to Charlotte, North Carolina to Miami, Florida and then north to DC and hitch a commuter plane to Hagerstown, Maryland. We checked out Amtrak. We could easily take it to DC, rent a car, and drive out of the Capitol, heading north. The last time I drove through Washington, DC, we ended up almost in Ocean City, Maryland while I'd aged five years. 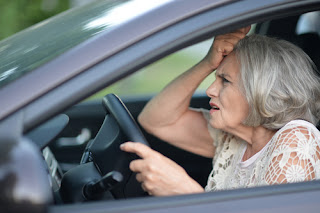 "I could drive the whole way," I suggested to Calvin. I thought his shaking head would tumble off his shoulders.


Calvin looked at me as if he'd discovered the solution to world peace. "You know what? I haven't ridden a bus in years. Let's see if we can take a bus up there. I rode it all the time to Hampton University. It's a relaxing way to travel."

I swear my sweet husband's memory has faded. There was nothing relaxing about our trip to Pennsylvania. But getting to see my sister and brother was great. 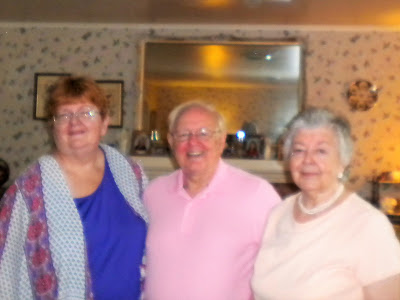 Left to Right: Me, my brother Ray, and Pauline. I'm the baby.

We had a great little family reunion. Plus, I got to see both of my sons and grandkids. A very pleasant trip. Then we got on the bus to head for home. At the terminal in Baltimore, a new driver got on. 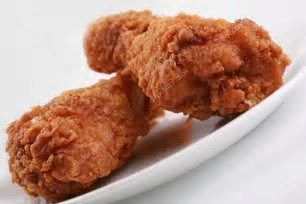 I knew we were in trouble when she'd driven three blocks from the terminal, stopped, and yelled, "Okay, listen up, y'all. This is a new route for me. Is DC north or south of Baltimore?" She reached into a bag of fried chicken setting on her window ledge and pulled out a drumstick. "Which way do I go?"

Someone yelled directions and she aimed the bus toward DC while she chewed on her chicken. "See, I'm from South Carolina, but the company moved me up here to run this route." Honestly, the driver talked faster than the bus drove. 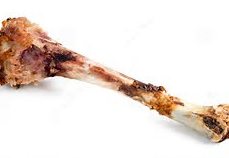 "Okay," she waved her chicken bone over her head. "I'm coming up on DC. Who has a phone with a GPS. Help me find the terminal." We gave her directions which she claimed were wrong. In the meantime, we circled the Washington Monument three times. Zipped the wrong way up a one way street. Horns honking. People yelling.

She flagged a city bus down as leaned out the window. "Hey! Can you tell me where the Greyhound terminal is?" She followed the other bus driver's directions and drove by the station twice while claiming the man was wrong. At one point she aimed the bus toward the White House, hell bent for leather,  while security guards ran toward us, waving their arms. They gave her the same directions that the city bus driver had.

She finally pulled into the back of the station--the wrong way. And when workers yelled and waved, she waved the chicken bone she'd been sucking on at them. "Get the hell out of my way. I've been praying on Jesus to find me the way here! I'm not backing up now."

Heavens, so had we! 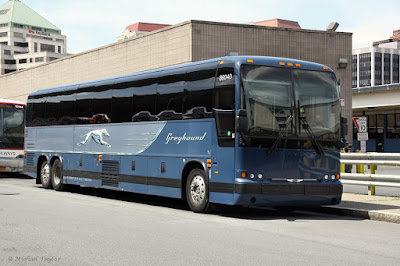 Some trips just go haywire. Like Zoey Morningstar's trip to Paris for the birth of her sister's first child. Her daughter's kidnapping and rescue. A murder in the sex district. A bombing in the Metro. Going undercover with a handsome French Counterrorism Agent to find the terrorists who tried to kidnap her daughter. Passion. Her trip was to include none of those things, but like ours it had its own twists and turns. Only much more dangerous and sexy. 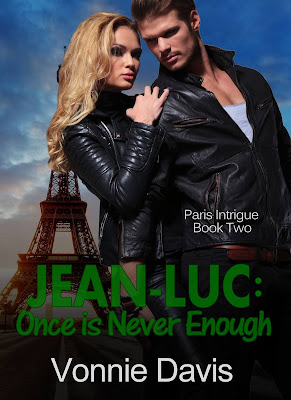 Posted by Vonnie Davis ~ Romance Author at 12:14 AM

Your DC escapades bring back a few memories. When I was in college, we took a bus trip to DC. The driver couldn't find the Smithsonian, and we ended up at Arlington National Cemetery. And, back in those days we didn't have GPS. On the bright side, glad you got to see your family. In your photo, you all look adorable (smile!).

Your chicken bone flinging woman is surely a new character in one of your books. Stranger than fiction. I'm glad you got back safe to the terminal. Whew! I've only been on those 'comfortable' shuttle buses, say the two hour gig from Chicago O'Hare to Janesville, Wisconsin. I'm not fond of the narrow bus seats...if the bus is full and my husband and I have to sit together, I'm ready to divorce him at the end of the two hours. Ouch, ouch, ouch! No, I agree, Vonnie. Buses are not our form of transportation anymore.

What Rolynn said about a new character. What a trip. My kids still laugh over the time I navigated us off the wrong exit off the Beltway during rush hour. So glad you got to see your family.

I've had a couple of bus trips in my life...none of them as dicey as yours, but I wouldn't want to repeat. Glad the family part went good.

Over on our Heartwarming blog today, Amy Vastine described her vacation. Between you and her I'm almost--but not quite--convinced to stay home! This was hilarious. Glad you and Calvin survived and enjoyed.
https://heartwarmingauthors.blogspot.com/

Only you, Vonnie. What a hoot! I rode a Greyhound the length of Michigan once. Four hour car trip, ten in a bus. Glad your trip was a success and you got home safely. Nice seque, BTW. Well done.

The last time I rode a bus was home from college. I fell asleep, and thankfully, my dad got on the bus at my final stop and yelled for me. Otherwise, who knows where I would have wound up! Hey, that could also work for a book plot. I expect your chicken bone-waving driver to appear in a book, soon!

THANKS everyone for your comments. I was in and out of doctors' offices today. I have kidney stones and some kind of infection that prevents me from going to the john. I had to have a catheter inserted. And a host of other fun stuff. I'm home. The kidney stones are happily snuggled in. Me, I'm not so pleased. But, this too shall pass. And pardon the bad pun.

Oh, Vonnie, I'm so sorry you're having all these medical issues. I hope everything resolves quickly. But thanks for the morning laugh (even if I am a day late!). Your story brings back so many memories for me, too! I remember getting on a bus in Philly to head to State College (Pa.) and the driver had no clue how to get there. No GPS way back then, but thankfully no fried chicken either! (Although I do have a fried chicken story related to Amtrak. Hmmmm...) :-) I

Nobody had travel fiascos like you. Nobody. But I'm so glad you were able to see your sister and the rest of your family. As for those *$&@! kidney stones--well, enough said.

Wow, what an experience! You always make me laugh so hard. Your book sounds excellent!!!