It’s safe to say I’ve fallen off the blog wagon this year. In fact, that’s an understatement. I want to offer my apologies to my fellow Roses and our amazing readers as well as an explanation….


For the last few years, I’ve approached Christmastime with a bit of bah humbug. This year, however, things have changed. Suddenly, I love the holidays. The stress of December has finally taken a backseat to the joy of the season, and it has everything to do with an early Christmas present for the hub and me!
Before I get into that, I have to rewind four years. The hub and I were in our early twenties and fresh off the honeymoon phase of our marriage. We had started thinking seriously about the future and family, especially when we moved into our first house in 2008 and the smaller of the two spare bedrooms started looking more and more like a possible nursery. Thoughts of having children were accelerated by the baby boom happening in his family. My husband has three brothers, two sisters, one step-brother, and two stepsisters. Out of all of them, all but three have married and started their own families. He has approximately twelve nieces and nephews, and many of them were born just before, during, or after this period. There were babies everywhere. Any doubts I might have had about being ready to have kids vanished whenever I saw the hub with his nieces and nephews, particularly the young ones. If ever a man were meant to be a father, it’s him.


When you’re a young girl, it’s easy to catalogue this part of your life. In my mind, everything would happen like dominoes. Finish school. Find the right guy. Get married. Have babies. I finished school, I found my guy, and married earlier than most. Never did I imagine that I would have trouble getting pregnant. Unfortunately, this was the case. The first six months, it’s easy to blame outside factors like stress and timing. A year goes by and you begin to wonder what’s wrong. After four years…well, you get discouraged. Especially after the doctor’s visits where we were told there wasn’t anything wrong with either of us. We took the doctors’ advice and still nothing happened. By last Christmas, we had given up.
Anyone who has been in this situation knows that if the people around you are aware of it, they offer you their own pointers. Lots and lots of pointers. From the practical to the superstitious. We heard some downright crazy stuff. One of the childbearing myths we got a kick out of came from both my mother and grandmother who told us more than once that when we stopped trying, it would happen. If we took our minds off it, we would get pregnant. Like magic. They told us stories about couples who had been trying for a decade who gave up and bought something really expensive – like a house or a nice car – and bam! it happened, just like that.


We didn’t believe it. But we had given up. And in March, my husband brought home a new “toy.” A jet-ski, to be exact. A very expensive, top-of-the-line kind of jet-ski. It was hard to argue when I could tell by the look in his eyes that he had found his new “baby,” and I had to admit that it was a fun, healthy distraction from the long years of disappointment.
A few weeks later, I started to feel a little icky. When my “stomach virus” lasted over a week, we began to wonder. We had been through this before. The maybe we are/maybe we aren’t had happened too many times to count. But there was something different about this time. Still, we put off the at-home pregnancy test for another week. Then I couldn’t handle the suspense anymore. On April Fool’s Day, we finally got a positive. Christmas had come nine months early and we were ecstatic! And yes, my mother and grandmother very much enjoyed telling us “We told you so!”


The doctor told us to expect a Thanksgiving baby. Though the first trimester made the holidays seem far, far away. My writing and blogging schedule took a hard hit thanks to extreme fatigue and morning sickness that lasted from dawn to dusk. Despite a demanding work schedule, the hub really stepped up and took care of me and our little bean. By summer, the morning sickness had faded but the crazy, southern, summer heat kept me indoors in the air conditioning. I took up a bit of writing again, read a good many books, but didn’t return to blogging. I had trouble focusing on anything none-baby-related.


Finally the third trimester rolled around. I was surprised by how smoothly the pregnancy had gone, despite the bumpy start. My doctor pleased us even more by suggesting we should induce on November 19. That way, we could possibly be home for Thanksgiving with our new bundle!
I walked into the hospital late the night of November 18, was induced early the next morning. Shortly after noon, I was ready to push and we were blessed with a beautiful baby boy at exactly 2:24 p.m. After so long a time in the birth canal, he gave us a bit of a scare, and instead of the skin-on-skin time we had planned on for months, he was handed over to the amazing nursing staff and his lungs were pumped. Three minutes after he arrived, he let out his first cry and the hub and I – and everyone else in the delivery room, for that matter – dissolved into tears. 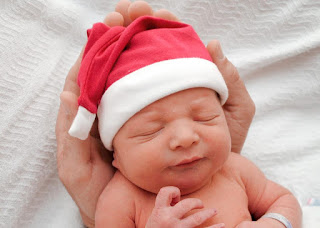 Jacob James, Jr. weighed in at seven pounds, twelve ounces, measured twenty-one inches long, and was so perfect and precious, we were both almost afraid to hold him. After another two days, we were discharged and on our way home for Thanksgiving with much to be thankful for!


Since I was absent from blogging for so long, I wanted to give the Roses the first glimpse of baby Jake as a way of saying thank you for being so patient with me over the last nine months. And I wanted to wish everyone a happy holidays! I hope all your wishes and dreams come true and all your prayers are answered this holiday season!

Amber Leigh
Posted by Amber Leigh Williams at 1:42 AM

Congratulations, Amber. A baby is the best gift of all. I would have given you the same advice as your mom and grandmom.
Bless your family.

Congratulations to both of you and to all your family. What a sweet little blessing! And your story was so wonderful - a jet ski - what a hoot! Best wishes to all of you for a lovely holiday season.

Amber,
I couldn't be happier for you! I've been where you were - 2 surgeries, fertility drugs, etc. - but it worked. Twenty-six years later, my beautiful daughter is still the light of my life. Huge congratulations on your new addition!!!

Well, I have to tell you this grandma is crying like a...baby. Only I'm not as precious when I cry as baby Jake. What a touching story of love and hope and miracles. A jet ski as a fertility drug...who-da-thunk-it. Blessings on your little family.

Now that's a beautiful story with a happy ending!

Thrilled for you, Amber.