Guest Jude Johnson Tells Us About That Special Place...

One of the best aspects I adore about reading fiction is visiting places I have never been or may never see. So when I write, I want to transport my readers into the locales my characters inhabit or visit. That also gives me a marvelous excuse to travel!

Out of Forgotten Ashes, Book Two of my Dragon & Hawk historical Western romance series, travels from Tombstone to Tucson and San Diego of the mid-1880s. I know other writers who say they don’t need to visit a place to write about it, but it’s essential for me. I take photos and jot notes about smells, sounds, and how the very air feels. For example, there is a scene in Out of Forgotten Ashes when our hero, Evan Jones, meets with a woman he once called friend in a small park in what is now San Diego. They walk beneath an ornate trellis to a more secluded area to talk.

This arch is what I visualized; the photo was taken in a small park on Shelter Island, which extends out from Point Loma along the western side of San Diego Bay. While Shelter Island was actually man- made in the 1960s, it was constructed outward from the peninsula at the historical location of what was then called Roseville, where my fictional park would have been in 1886.


Another place on Point Loma that figures prominently in the storyline is a special beach where Evan and his beloved wife Reyna sail to be alone. Around the southern tip of Point Loma (known as Cabrillo Point) is a beautiful beach facing the Pacific--just what I had in mind. In reality, it is part of the campus of Point Loma Nazarene University, below Young Hall, one of the men’s dorms. [As a personal note, this is my son’s residence hall. Poor kid has to really suffer, doesn’t he?] Of course, the buildings and such were not there at the time my story takes place; this area was wild and uncultivated in 1886.
Can you imagine the cold shock of the spray on sun-warmed skin as a wave crashes against the rocks? Can you smell the brine and hear the
gulls crying overhead? These remembered
sensations are why I feel so strongly about
visiting where my characters will walk. The
goal that I hope I’ve achieved is to make
those fictional places so realistic you’ll feel
as though you were there as well. 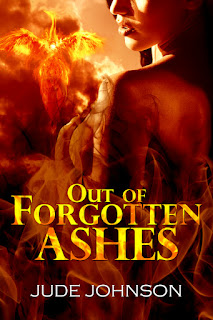 Blurb for OUT OF FORGOTTEN ASHES (Book Two of Dragon & Hawk series):
Evan Jones thinks his troubles are over in 1886. He’s married his love, the Mexican healer Reyna, and started horse ranching outside of Tombstone in the Arizona Territory. But tragedy strikes when least expected to nearly tear their union apart. Evan and Reyna soon face more than one phoenix rising from forgotten ashes of his past that threaten dire—and possibly deadly—consequences.

Excerpt:
A young man with his hair slicked flat against his head, slender and lean in a server’s uniform, approached carrying a silver tray of crystal glasses filled with light, bubbly liquid. He allowed each of them to choose then silently glided to other knots of guests.

He smiled at their exchange of languages, always their private flirtation. He leaned in close. “I hope I didn’t embarrass you, love?”

Her voice purred low in reply. “No, but you were about to embarrass yourself, dear. That visit was all Huw’s doing, I suppose?” She tasted her drink without looking at him.

“Yes, yes. Quite right. He and Dylan. Terrible bad influences, the two of them. And faro only for me, swear.” He smiled at her and straightened.

“You should invite the Earps to your next soiree, James,” Ephraim Morse suggested. “That would be most entertaining, wouldn’t it?”

John Sloane laughed. “But would we dare play cards with the man?”

Kindall held up his hand. “No. I’ll have no slick-fingered gambling gunslingers or wanton women in my house. Julia would be horrified.”

“James, where is your lovely wife?” Mary Morse looked around the room. “Have we missed her?”

Their host sipped his champagne. “Julia will be down shortly. She loves to make an entrance, you know. Oh perfect, here she comes.”

Evan looked up, smiling. Suddenly the room constricted to the size of a prison cell, the walls moving closer and closer with each breath. His heart flipped and leapt. Every trick he’d learned playing faro kicked in to compose his face into a pleasant, blank expression.

The woman descending the stair met his eyes. Hers flashed in recognition for barely half an instant. Never pausing, she looked away and continued down the stairs, calmly smiling, graceful. She stepped off the last riser. James Kindall came to her, kissed her left hand, and turned, beaming, to face the group. “Ladies, gentlemen, my lovely wife, Julia.”

Time stopped. As did Evan’s breathing.

While I’ll be at a signing event in Tucson most of the day, I will pop in before I leave and as soon as I get home to respond to questions and such. I’ll randomly draw a name from everyone who comments for a free pdf of OUT OF FORGOTTEN ASHES. Winner will be announced on ROSES OF PROSE at 8:00PM (Pacific Time) on 31 March. Winner must then email me at AuthorJude@comcast.net and I will send them their prize on release day, April 2nd.

Website: http://jude-johnson.com
Blog: http://wordsthatremain.blogspot.com
Buy OUT OF FORGOTTEN ASHES on April 2, 2012 from:
http://champagnebooks.com/shop/index.php?route=product/manufacturer&manufacturer_id=52
Posted by Laura Breck at 12:01 AM

Email ThisBlogThis!Share to TwitterShare to FacebookShare to Pinterest
Labels: Jude Johnson, Out of Forgotten Ashes

Great post, Jude - and so true. You certainly transported this Scot to another wonderful place in Dragon & Hawk! Look forward to this one.

Thank you so much, Romy. Every trip is now "Research" for my next endeavor... (wink wink)

Thanks for the post, Jude. Research, in person, serves you well. Great pics too!

Lovely photos, Jude. My husband is from San Diego. I can only imagine how it looked in the 1880's without freeways... I almost always write about places I know well. I agree that there's no substitute for personal experience to reveal the true character of a setting.

Thanks, Brenda. I love doing research--as long as it doesn't entail cleaning!

San Diego was quite the hopping place back in the 1880s. Being from Arizona, I'm fascinated with the ocean and how light changes the colors from dark blue to green to aqua with every variation in between. Do you get to visit the area often?

AND THE WINNER OF THE DRAWING IS...

JANNINE!
Please email me at AuthorJude@comcast.net and I will send you a PDF of Our of Forgotten Ashes on Monday, April 2nd when it is officially released. Congratulations!

Wow, Jude, thank you so much! I'll look forward to reading your book.

We visit San Diego about every other year. Lots of my husband's family is still there.